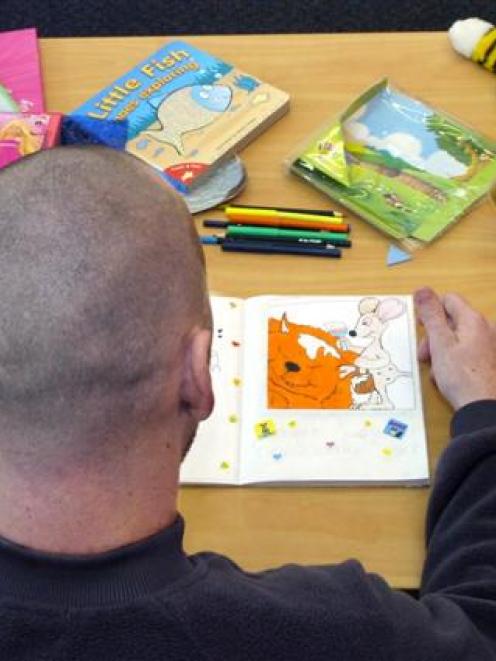 Michael, an inmate at the Otago Corrections Facility, adds the finishing touches to a story he has written for his daughter. Photo by Jane Dawber.
As Father's Day approaches, some dads need to work harder than others to stay in touch with their children. Kim Dungey reports.

"I tell her I love her and daddy's always here," says Michael, about the message he has included on a DVD for his 16-month-old daughter.

"When she's older, she can look back and see I did try."

Stickers, puppets and pens cover the desk in front of him.

It could be a workroom anywhere, except for the presence of cameras and keys and the fact that Michael is dressed in a grey sweatshirt and trackpants.

The 27-year-old is serving three and a-half years at the Otago Corrections Facility at Milburn.

Tomorrow, children around the country will give their fathers presents and cards but for Michael's daughter, the roles will be reversed.

It will be her receiving the gift, thanks to the Storybook Dads programme that enables fathers to take on a natural parenting role from behind bars.

The fathers spend 20 hours working on the production of a DVD which shows them reading a story and this, along with a hard copy of the book, is posted to their child in time for Easter, Father's Day or Christmas.

The men also create their own books and personal messages, sometimes telling their children not to make the same mistakes that they have.

Storybook Dads has connected more than 160 Otago prisoners with their children, at the same time improving their literacy skills.

This week, a Te Reo component was added for the first time and soon the programme will be extended to Invercargill Prison.

"It's a good opportunity for prisoners to have a bond with their children," says Michael.

Being involved in the programme has improved his reading and confidence, he says.

At first, even talking into a microphone was daunting and later it occurred to him that anyone could walk in on his daughter watching the DVD and "have a laugh".

"But I don't see it as embarrassing because my daughter gets to see me and hear my voice."

The youngster already has two other DVDs he has made and watches them before going to sleep at night.

He sees her every week or two, but misses her "very much".

Keeping families connected also makes the transition easier, when fathers are released and assume their role as head of the family again.

"The men are determined that when they get out, they are going to be better dads and want to have a relationship with their child. This is that bridge."

Two tutors from the Methodist Mission Approach Community Learning team work with the men on the project.

Practice leader Charles Pearce says the programme, running in Otago since 2007, was based on one used at Dartmoor prison in England and adapted for the new kind of facility being established here.

The Milburn complex is a corrections facility rather than a prison so there is a major focus on rehabilitation, including education.

The big break-through came about a year ago when approval was granted for the prisoners to be videoed reading the stories.

Until then, children could only see the page of the book on the DVD and hear their father reading it.

Allowing a camera to be taken into a prison and images of prisoners to leave the facility was significant, Mr Pearce says.

"What that means is the prison sees the absolute value of the programme [in terms of] the literacy aspect and the pro-social connections [with families]."

About 80% of prisoners on the programme have literacy skills below the level required to participate fully in society.

Assessed at the end of the project against the six-step Tertiary Education Commission progressions, 95% have made gains of at least one step and 5% have made two-step gains.

Children's books generally have simpler language and larger print than adult's ones so the men do not find them intimidating.

Ms Crofts says issues from the prison library have increased, as has the level of books the men are reading, and most taking part in the Storybook Dads programme undertake further education Anecdotal evidence also points to significant benefits when the children receive the DVDs and play the stories, following along with the hard copy of the book.

"For some of these children, it's the first book they've owned... Now they're wanting books and wanting to go to the library.

"When you've got children feeling more positive and more confident and increasing their literacy, that has got to benefit society."

At present, the programme is offered in only four men's and women's prisons.

But the Methodist Mission hopes to collaborate with the crimes and research department of Victoria University to assess the impact of the programme and have it introduced in others prisons around the country.

Each block course catering for up to 10 prisoners costs the Corrections Department $3383 plus GST.

To be eligible for the programme, prisoners must be seen to be addressing their offending and attending to the objectives in their sentence plans.

Those who have completed a parenting skills programme get first option.

Tutor Stuart Porter says the effort the men put in is "enormous".

"They see that it's going to the family, not just the children, and it almost becomes something that represents them in the family for a while."

"A lot of inhibitions and the defensive wall they put around themselves is taken down for the time they are in the group."

Some sing songs on camera.

Others offer their children fatherly advice about looking after their mothers or doing well at school.

The programme allows the men to show their genuine feelings for their families and to think about being good parents, Ms Bain says.

That might be as simple as considering what their children would like to see them do on tape, such as looking directly into the camera and assuming funny voices for different storybook characters.

The latter is a "tough ask" in front of fellow inmates so a separate room is used for the final recording, Mr Porter adds.

"We use hand puppets to help them get into the mood of relating to children... Some of them get it straight away and have obviously been involved with their children in that way before... But quite a few of them are obviously quite new to even talking to their children."

Some fathers have not told their children they are in prison and go to great lengths to hide the fact by not mentioning where they are and making sure they do not look like prisoners, he says.

"We encourage them to do that [anyway] because we're aware the DVD could be around in their family for decades with people still watching it. It's good for them not to look like some guy stuck in prison."

Some have tried unsuccessfully to have contact with their families and see the programme as a first step in gaining their trust again.

One child never saw their father's DVD because the prisoner's former partner threw it in the rubbish.

However, most are well-received.

Some children see their fathers only every four or five months and recent research by Wesley Community Action shows the effects of such forced separation.

Many children experience stress and have problems sleeping.

"The men know that what they are sending home is much more than a card and a DVD," Mr Pearce says.

"It is a representation of love and the fact that parenting doesn't stop just because they aren't there."

Most of the men taking part are the product of broken homes, violence, drug abuse and gang involvement, he adds.

Some have been in foster care for most of their lives.

Others have parents and siblings who were also in prison.

Michael's father lived in a bus and "pulled up whenever he pleased".

His mother would hand him over for the weekend and after two days his father would "be gone again".

His mother never read him bedtime stories because she was illiterate, he adds.

"So I never had that sort of bond with my mother or father but hopefully I can do something different with my own daughter."

The burglary and cannabis cultivation that resulted in him being incarcerated was a "big mistake", he says.

"It's my own fault. But my daughter doesn't deserve to be without her father... It hurts me knowing I stuffed up so bad."

Michael was in prison before becoming a father but says having a partner and a child is an incentive to change.