Glad to be a Kennedy 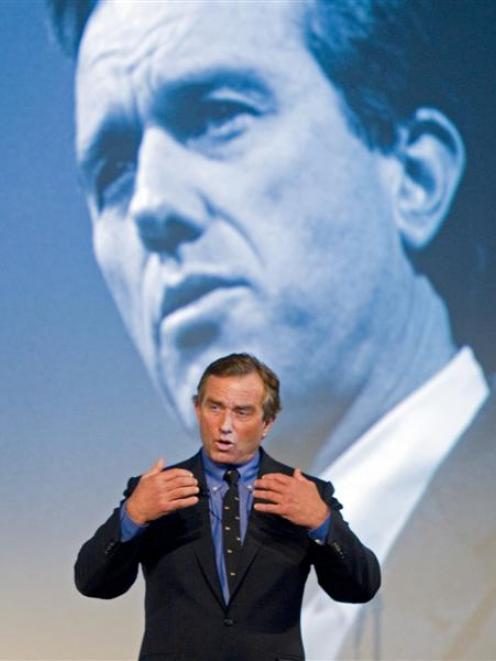 Robert Kennedy addresses the School Aid launch in Auckland this week. Photo by NZ Herald.
Robert Kennedy is cleaning up. Andrew Stone, of the NZ Herald, talks to American "royalty".

Robert Kennedy remembers the moment he became an environmental activist.

He was in the Oval Office, showing his uncle, President John F. Kennedy, a salamander that he kept in a jar.

Kennedy recalls he told the president that he wanted to write a book about pollution.

His uncle arranged meetings with White House officials for his nephew, who was just 9.

The young Kennedy kept tapes of the briefings and left the salamander, which came from a zoo he set up in the basement of the 13-bedroom family home in Hickory Hill, Virginia, with the president.

His targets are living and large: he is after the energy giants and he thinks that within a decade, America's coal and oil industries will be in the shade, pushed aside by efficient, clean energy technologies.

And being a Kennedy, the American equivalent of royalty, he can sell a White House story.

Robert Kennedy, son of Bobby, was in Auckland this week to lend his name to an ambitious new charity, called School Aid, being brought together by former prime minister Mike Moore.

The Kennedy name has pulling power: the event, at $400 a ticket, sold out.

Kennedy is upbeat about the environment.

His take on the Copenhagen climate summit is hopeful, though he fears we may be too late to avert some of the most catastrophic effects of global warming.

He adds: "I'm optimistic that for the first time we've got serious engagement from the US, China and India".

The summit, he says, is taking place as a range of new energy sources is developed with the potential to create enough power to replace coal, oil and nuclear fuel.

"I'm optimistic because I'm involved in the cutting edge of green technology, which we're beginning to adopt very quickly here in the US. I've been able to see how efficient this energy can be.

"I'm confident if we are able to rationalise this energy with our marketplace in this country, then we'll quickly see the dominance of the incumbents disappear. By the incumbents, I mean coal, oil and nuke.

"Their dominance will recede because, in a truly free market, they simply cannot compete with much more efficient new energy if they are forced to internalise all their costs.

"We have a market that has been rigged by the incumbents to reward the dirtiest, filthiest, most poisonous, most addictive, most destructive fuels from hell rather than green, efficient, clean fuels from heaven."

Kennedy says: "The choice is treating the planet as if it is a business facing liquidation and convert our natural resources to cash as quickly as possible. That will give us a few years of pollution-based prosperity.

"You can generate an instant cash flow and have the illusion of a prosperous economy but our children are going to pay for the joyride with denuded landscapes and poor health and enormous clean-up costs.

"Environmental injury is deficit spending. It's a way of loading the costs of our generation on to the backs of our children. I don't want that."

Kennedy was 14 in June 1968 when his father, who had just won the Democratic Party primary, was shot in Los Angeles.

He flew to California and was at the hospital when Bobby Kennedy died.

He had already experienced another Kennedy funeral - that of his uncle, the president, killed by an assassin in Dallas in November 1963.

His mother Ethel, who at 81 is regarded as the matriarch of the Kennedy clan, raised 11 children.

Robert was her third child. The family played outdoors.

Bobby took his children rafting and hiking and Bobby jun's love of animals saw him race homing pigeons at age 7 and take to falconing at 9.

He is now a master falconer.

Kennedy went to Harvard, then to law school in Virginia.

His charmed life hit a wall in 1983 when he was arrested for heroin possession.

The 29-year-old's misfortune may have shaped his career because he spent his community service sentence with a watchdog group formed to protect the polluted Hudson River.

Twenty-five years later, Kennedy helps run an environmental empire which goes into bat for the Hudson River and other waterways.

His vehicles include the Waterkeeper Alliance, an umbrella group for water protection activists, the Hudson Riverkeepers, the Natural Resources Defence Council and his law clinic at Pace University in New York, where he teaches young lawyers to take cases against alleged polluters.

Kennedy says that after 400 suits involving the Hudson, what was dead water is now "the richest water body in the North Atlantic.

"This is all as a result of litigation - we rescued our country from a kind of toxic Armageddon."

The work impressed Time magazine, which called Kennedy one of its "heroes for the planet".

The Waterkeeper alliance has a global reach.

Its "keepers" work to protect vulnerable water bodies with the threat of legal action and look to Kennedy for their inspiration - and to help bankroll the law suits.

In this he is helped with profits from a bottled water company sold as Keeper Springs.

Three years ago he tapped a six-figure sum from clothing sportsware giant Gant by agreeing to pose for an advertising campaign with wife Mary and four of his six children.

Kennedy says the lawyers who work with his environmental projects do it for the causes and not money.

He estimates that the IQ of American children was raised three points after lawyers with the Natural Resources Defence Council waged a successful battle to remove lead from petrol.

And he says "millions of acres of wilderness" has been saved by advocates who fight for nature "rather than selling their souls to the corporate world".

In 2001 Kennedy ran foul of the law a second time and ended up in jail.

He was charged with trespass after he took part in a protest against a US navy exercise on an island in Puerto Rico.

But he considers the fight he is taking against traditional energy sectors "the most subversive stuff I've ever done.

"We are literally going to overthrow these entrenched incumbents within the decade. It's a trillion-dollar industry and we're going to take all their money away from them and democratise it."

The strategy is political and legal.

He intends to keep the pressure on in the courts by railing against waste and pollution while promoting alternative solar, wind and geothermal generation.

His house in upstate New York has two solar units on its roof as well as bores sunk beneath the home.

The upshot, he says, is an energy-efficient home at a fraction of a typical energy bill.

He thinks President Obama is making the best of an uphill battle against a Congress he describes as controlled by big industrial players.

But he feels that Obama made a mistake committing more troops to Afghanistan: "We should get out."

He recalled that US army general Douglas McArthur told "my uncle John Kennedy that any president who puts American troops into a land war in Asia ought to have their head examined.

My uncle refused to commit combat troops into Vietnam despite all the pressure from the generals and the CIA ... He just kept repeating that line from General MacArthur".

Kennedy the Democrat is scathing of new voices on the right in America.

He argues there is a paranoid tradition in US politics, which traditionally has been marginalised because it lacked access to money.

"Now they have Fox News and virtually all of talk radio and so they have a strong foothold.

They are well entrenched; their power is magnified with the support of Wall St and the Christian right.

"They have all the elements you need for political power in America. They have intensity, they have foot-soldiers and a lot of money - the barbarians are at the gate. You know it's not much different to what we saw in Germany in the 1920s."

Kennedy dismisses them as "delusional".

But he relishes the chance to take them head-on.

He'll see them all, he says, at the barricades.

School Aid
> Robert Kennedy jun was the star attraction at a fundraiser this week to start up an education charity for pupils from low-income families.

> The launch on Wednesday was for School Aid: Global Partnerships through schools. The brainchild of former Prime Minister and World Trade Organisation director Mike Moore, the idea is to set up an investment fund overseen by New Zealand pupils with dividends going to schools in developing countries.

> AUT University is working with Moore to develop the concept for rollout through secondary schools in New Zealand.