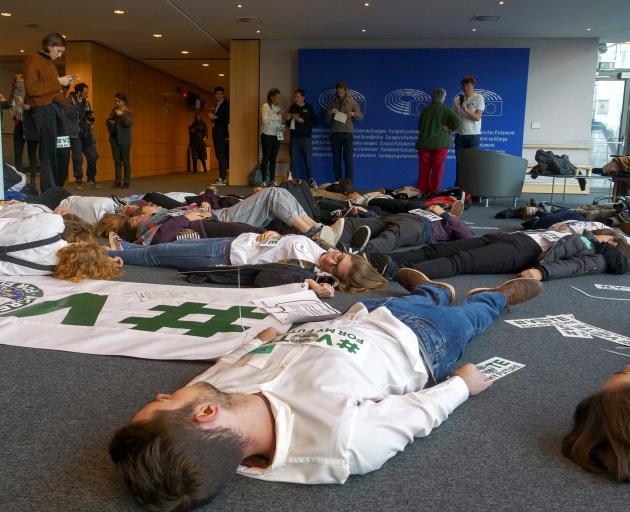 Youth for Climate activists stage a die-in to demand more ambitious climate change goals by EU lawmakers, during a protest inside the EU Parliament in Brussels. Photo: Reuters
Whether you live in Hong Kong, Iran or New Zealand, nonviolent civil disobedience has the most success, Prof Stellan Vinthagen says. The visiting Swedish activist and researcher talks to Bruce Munro about the need for widespread global change and the best way to fight for it.

Stellan Vinthagen has taken part in his share of civil disobedience.

In 2010, he was providing support to the flotilla of boats trying to break the Israeli blockade of Gaza.

"It is still difficult to understand why they murdered humanitarian activists in international waters."

Two years later, he was aboard a boat doing the same thing when it was again boarded by Israeli soldiers. Vinthagen and others were Tasered and he was deported.

His first involvement in direct action, however, was a quarter of a century earlier, as a 22-year-old member of international disarmament movement Ploughshares. He and a couple of others, carrying hammers, walked on to a United States military base in western Germany and disabled a Pershing II nuclear missile launcher. For that, he spent three months in prison.

"It wasn't difficult to get on to the base ... but there was a risk of being shot by the guards."

Prof Vinthagen is speaking by phone from Parihaka, the site of New Zealand's best known pacifist action. The 55-year-old activist and resistance researcher is on his second visit to New Zealand to promote, and provide training in, the art and science of nonviolent direct action.

"We need to have good training and understanding when it comes to activism. I think it is essential to learn from other struggles and to have a strategy that is well developed.

"In the same way the police and military will always do research and training to try to sort out innovative ways of acting ... in the same way, activists need to do that."

Globally, everywhere you look, there seems to be protests and demonstrations. Mass protests against China's tighter grip on Hong Kong have turned to violent clashes with police. Large-scale demonstrations in Bolivia have led to the army pressuring President Evo Morales to resign. In Spain, hundreds of thousands of people gathered in Barcelona to express their anger at the jailing of Catalan separatist leaders. Widespread protests in Iran in reaction to sudden hikes in petrol prices have resulted in a violent crackdown by police and a complete shutdown of the country's internet. And in September, millions around the world joined in a youth-led global climate strike.

Commentators say the level of social and political discontent worldwide is the greatest it has been since the 1960s. 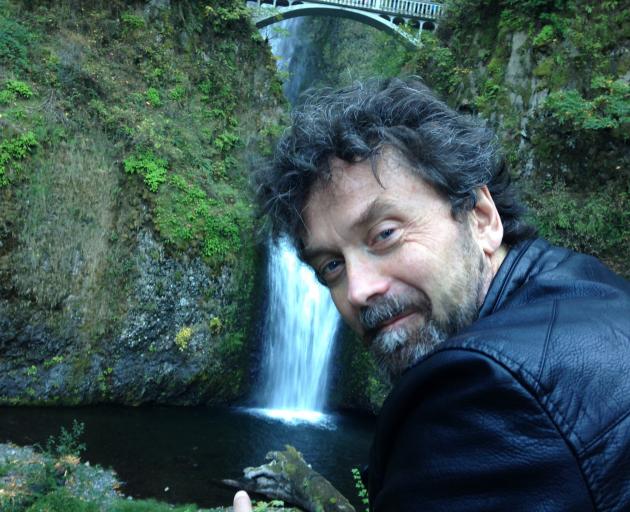 Prof Stellan Vinthagen, of Sweden, is visiting New Zealand providing training in nonviolent civil disobedience. Photo: Supplied
There are some common threads to all the rallies and protests, Prof Vinthagen says.

"Fundamentally, we see a system crisis of society today."

It can be seen in the global financial crisis of 2008, in the present threat of climate and environmental collapse, and in increasing inequalities brought about by the world economic system.

Often, these concerns are expressed in anger at ruling elites who are seen as corrupt and authoritarian.

"The inspiration that is driving these movements is that they see so many examples of how people, when they gather in large protest movements with civil disobedience ... are very often successful. They are inspiring each other."

The fact that they are successful is a surprise that is increasingly being borne out by research, Prof Vinthagen says.

During the past century, nonviolent campaigns globally have been twice as likely to succeed as violent protests. This is true even in authoritarian situations.

Also, it takes just 3.5% of a nation's population engaged in sustained nonviolent resistance to bring about regime change.

And lastly, nonviolent direct action is more likely to result in lasting democratic peace than is a violent overthrow.

There are two main reasons why nonviolence is more effective, Prof Vinthagen says.

Armed protest is for the few, whereas peaceful protest is something in which all age groups can participate.

"It is going to be dangerous at some point, but you are protecting each other by the mass participation."

Secondly, when many ordinary people take part in civil disobedience it undermines the government's ability to govern.

"Every powerful organisation is dependent on ordinary workers, citizens and consumers. When people refuse to co-operate with the regime, it undermines the basis of their power."

Hong Kong is a case in point, Prof Vinthagen says.

"It is always a mistake to believe that you can, through violence, create long-term change that is going to create greater democratic social justice.

"The more they are mass-mobilised and nonviolent, the more difficult it is for China to be repressive against them and the more they will have to give concessions."

But Hong Kong also points to the individual nature of each protest movement,

Despite the use of violence by some protesters, they have kept the support of other Hong Kong residents and of most international observers.

As long as their response is deemed to be reasonable, the protesters might still be able to get positive results, he believes.

"They have already pressured China to withdraw the original [extradition] law that was going to be introduced.

"There is a reason China is holding back and not using full-scale violence. They feel it is having a negative impact on their standing in the world."

Nonviolent direct action should be expected and encouraged in all countries, including New Zealand, Prof Vinthagen says.

"We are all an integrated part of the world, so we are also part of the problem when it comes to the climate collapse."

Civil disobedience can get ignored topics on the table.

"You are highlighting injustices by doing civil disobedience.

"You are not forcing the majority but you are increasing the conflict level in order to create a democratic discussion."

But he is not optimistic about the results.

"The protest movements are quite impressive in mobilising people. But they are quite weak in coming up with alternatives - how we should change society."

The focus of his research is on alternative ways of organising society.

He says a small number of groups are trying to go beyond the failure of communism, the failure of unfettered capitalism and the surrender of social democracy to neo-liberalism.

"We need some form of regulation of our economy that takes into account that every human being has a right to dignity and that we need to take care of our planet."

A full-day workshop on nonviolence theory and campaigning, hosted by Extinction Rebellion, today, 9am to 4pm, at the Theosophical Society (old Fitzroy Tavern), 469 Hillside Rd, bring a koha or plate to share 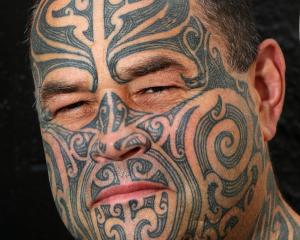 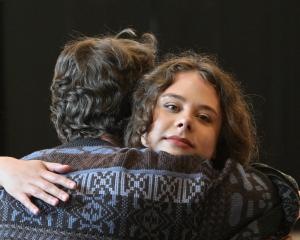 Ruling elites are not elected.