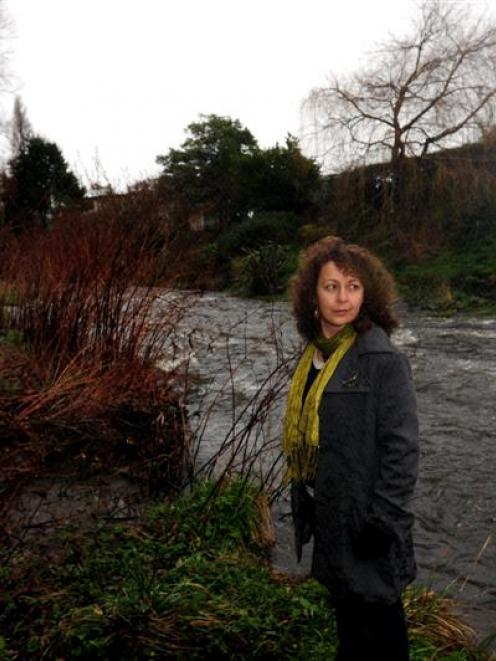 Crime writer Vanda Symon beside the Leith, where she has set a murder scene in her latest novel. Photo by Craig Baxter.
There are murky goings-on in Dunedin, according to Vanda Symon's latest work of fiction. Charmian Smith catches up with the author.

The body was found by the Leith in the Botanic Garden; the circus was at the Oval; the detective had to walk the long way round the gorgeous old railway station because a train had knocked down the footbridge - Vanda Symon's latest crime novel, The Ringmaster, is firmly set in Dunedin earlier this year.

"There's enough fact to be realistic and enough fiction to be fun. If everything was done the real way it would be as boring as hell and it wouldn't make an interesting novel," the Dunedin author said.

The Ringmaster features the stroppy policewoman Sam Shepherd, who first appeared in Overkill which was set in Mataura, Southland.

Sam has now moved to Dunedin, joined the CID, lives in Highgate and finds herself embroiled in the goings-on at a visiting circus and trying to solve the murder of a student.

"A town will have a feel, a social background. It will have a vibrancy or a lack of vibrancy.

"I like using Dunedin. It has a vibrancy and an edge with the students and all that brings with it - it always makes for a fun place.

"Sam's come from a small town setting. She's been a small-town girl all her life and in a larger town like Dunedin she's quite comfortable because it's not huge and vast, but if you tossed her into Auckland or Sydney - how an individual reacts to a place tells the reader a bit about that character as well."

They are placed in real time with world events affecting the action and Inspector Rebus maturing and retiring.

"And also with Dunedin I loved the physical setting of the green belt, and the bush and the sea and water. From that perspective it's a neat city.

"It will provide me with plenty of future ammunition, even if I have sullied the botanic gardens," she said with a laugh.

Many Dunedin cafés also feature in the novel, such as Nova, The Good Oil, Modaks and The Fix.

"I asked permission of the café owners first - they were quite chuffed as long as it was the goodies, not the baddies," she said with a laugh.

The Otago Daily Times features in the story - its headlines lead to further action, but she has also used quirky stories she read in the newspaper.

"I'm a newspaper junkie so newspapers had to feature. My house is full of newspaper clippings - I've collected them for years.

"You find interesting little snippets that add a bit of texture and interest to the story - glimpses into lives and happenings all over the world.

"Newspapers keep you up-to-date with current events. You do actually have a sense of what's happening, what's important to other people.

"I find that a lot of the little textural bits come from my newspaper-clipping collection, like the seagull at the police station.

"That really happened - they had a hassle with a seagull for a while. It kept walking through the automatic doors and crapped in the foyer."

Ms Symon does a lot of research for her books.

She talked to visiting circus people, and before he died she spent a long time talking to her husband's late stepfather, who was a policeman.

Now she checks police procedure and other details with a neighbour who's a detective.

"You don't want to make an idiot of yourself so I do check out anything I'm not too sure of."

Ms Symon came to Dunedin as a student, then lived in Hawkes Bay until returning to the city three years ago.

When she starts writing she usually has an idea of what she wants to happen, a start and an end point and a few spots she wants to reach in the middle, but then fills out the rest of the plot as she writes, she says.

Her first book took several years while her children were at home but now they are at school, and it took only about a year to write The Ringmaster.

The third in the series, Containment, is now well under way and the first chapter appears at the end of The Ringmaster.

"When you are writing a crime series, momentum is really important for the readership. When the book comes out, people read it and the first question they ask is when the next one's coming.

"I liken it to mum spending all day cooking and people troughing it in five minutes, which is the sign of a good meal," she said.

"I really enjoy writing about Sam. She just walked in and made it quite apparent that she was there to stay too. She's a bit stroppy like that.