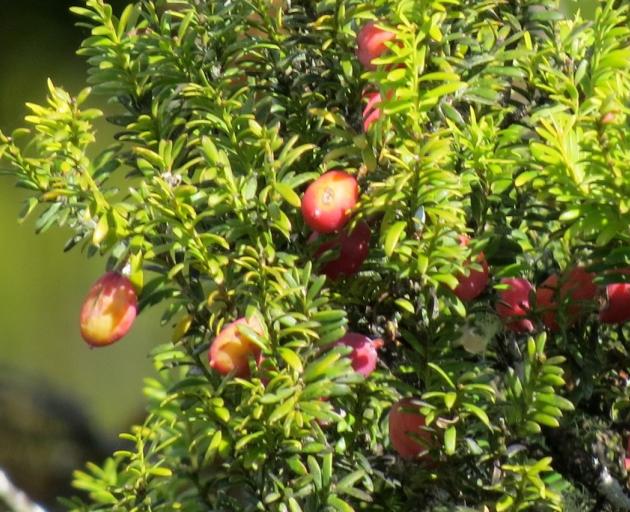 Having been fortunate enough recently to visit the West Coast, I found myself comparing some of what I had seen with what is so familiar at Orokonui. It was a particular delight to walk the 20m-high Treetop Walk near Hokitika and be astonished by the height of the coastal podocarp trees. Growing in what was once glacial outwash, the rimu there grow tall and slender, like kahikatea. They soar another 20m above the walkway. Quite unlike the massive old trees we have at Orokonui, such as the huge spreading one that dominates the Pokaka Loop track and never fails to astound me.

Sheltered a little below on the same slope there are a number of younger offspring of that tree. Yet it worries me that I don’t see many juvenile rimu elsewhere in the ecosanctuary, while it is not hard to find miro seedlings popping up along the network of pest-monitoring tracks. Why do miro thrive, but rimu less so? There are enough big old rimu elsewhere in our bush that one would expect to be a seed source, yet, by comparison with miro the juvenile trees are few. 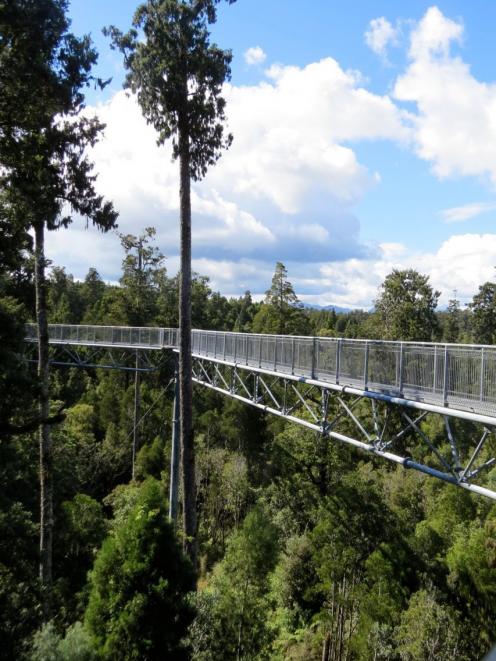 Slender Rimu tower above the Treetop Walkway near Hokitika.
But the views from the Westland Treetop Walk raised questions for me with regard to miro too. At present the miro and kahikatea there are laden with bright red fruits — not surprising that there were kereru swooping and diving around that glorious feast. But never have I seen such a rich fruiting in the Orokonui forest. Why not? What a difference geography, soil and climate must make, that the same species can have such different forms and productivity.

Nevertheless, wandering again along the Orokonui tracks reminded me of things I have learned to love in this patch of eastern Otago forest, and things that have helped me explain some of the special characteristics of the New Zealand flora, whose evolution has been governed by the break away from Gondwana 70million years ago.

A stopover in the Rare Plants Garden provides illustrations of some of them. There are a couple of lancewood trees, for example, both the common one (Pseudopanax crassifolius) and the ‘ferocious’ variety with its much more jagged leaves (p. ferox). On two of them the juvenile, umbrella-like growth of their long leathery leaves is already changing into a topknot of much shorter leaves starting to turn upwards, as they take on their adult form. A little further along the track another one, by the bird-feeding station, quite belies its youthful past, having reached full maturity. No wonder the early botanists took them for two different species.

But why this difference? Varying theories are offered. It may be an adaptation against being browsed by the moa, the large herbivore of our primeval forest. Once the foliage is out of reach of that giraffe-necked muncher it can afford to become softer and more leaf-like. That’s a popular theory, which is reinforced by the information that the lancewood of the Chatham Islands, where no moa lived, does not have that linear toothed juvenile phase. Or you may prefer the theory that the umbrella-like shape with the tough, downward sloping leaf-blades enables the young tree to push up through the density of larger trees to reach the light. Certainly, lancewoods like the light. That’s easy to observe in Orokonui. Where tracks have been cut and light let in, whole mini forests of young lancewoods appear. That argument may for some be more convincing.

But the questions never quite end. What about the horopito (Pseudowintera colorata), a tree known to exist in the Cretaceous

i.e. Gondwana times, also the age of the dinosaurs. It is what biogeographer Dr George Gibbs calls a ‘‘Moa’s ark species’’. Horopito certainly displays a self-protective adaptation that is still successful today: in bush where deer are not controlled, it is one of the few plants left in the understorey. It is evidently too peppery for their sensitive palate. That raises the question again: what was it protecting itself from? George Gibbs sees the moa as the grazing animal of the New Zealand bush, filling the role of antelopes in Africa or kangaroos in Australia, but that one browser seems to carry a huge responsibility if seen as the sole reason for such adaptations. Were there browsing herbivore dinosaurs in existence then?

An easier adaptation to understand is that of all the small-leaved, twiggy (divaricating) shrubs in the New Zealand landscape whose tangled growth conceals hard-to-get-at leaves and berries, protecting them for the lizards and birds that will eat the berries and spread the seed, and in turn protecting the animals from their predators.

An extreme example of divarication can be found in the Rare Plants garden, Melicytus flexuosus. It is definitely not a showy plant, but intriguing. For a long time after it was planted I thought it was either dead or dying, because it seemed to have no leaves at all. But it has grown quite a lot and these days its leaves are quite visible when you get close up, though it carries no berries.

I have many favourite trees in the ecosanctuary. Even as a child I loved the fuchsia for its papery bark. For me it was my papyrus, perfect for writing on. Then there is a young raukawa (Raukaua sp.) growing along the lower kiwi track, another tree with changing leaf forms. Possums love it. When I first met it, it was very small, but I have watched it grow. Today, in the absence of possums, it stretches high above me, lush with mature leaves.

For many, perhaps flowers are more interesting than trees. And this is the season for one of the sweetest, the Easter orchid (Earina autumnalis). I saw that on the West Coast too, growing as an epiphyte on those tall rimu trunks. But Orokonui is the victor in this comparison: at Orokonui it clads large rocks, one of which is easily accessible to visitors. You can get close enough to bury your nose in that delightful scent. Pay it a visit!

Alyth Grant is a volunteer at Orokonui Ecosanctuary.