Not a lot of notice 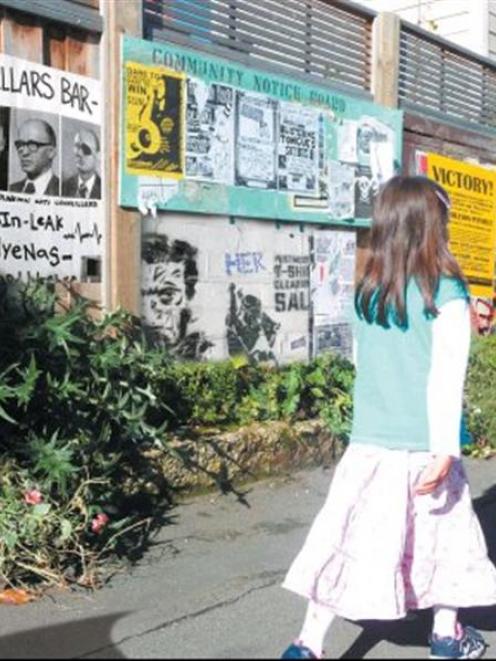 A girl walks past a fence full of posters and notices. Image created by graphic artist Alistair Craig from photos by Kim Dungey.
Medieval mercenaries need you to join their quest, reads one notice. Volunteer to help stop animal abuse, urges another.

Whether you're into stand-up comedy or spiritual development, the community noticeboard is the place to find out about it.

Or it used to be.

Maybe you haven't noticed but the humble noticeboard seems to be disappearing.

We didn't until a colleague alerted us to a string of Dunedin cafes and supermarkets that had recently removed theirs.

"It's as if these places think that by having no community notices, they will somehow become more classy, but I tell you it just makes them feel sterile, corporate and cold," she complained.

"No-one wants to eat their muffin in a mortuary. It's un-Dunedin-like. Bring them back!"

Dr Erika Pearson, a lecturer in media, film and communication at the University of Otago, had observed the decline, too.

Late last year she moved house and planned to use the local supermarket's noticeboard to sell items she didn't want to shift. Trouble was it had been taken down during renovations and never reinstated.

And Kitty Brown, events co-ordinator for the Otago University Students Association (OUSA), suspects people don't look at noticeboards as much as they used to.

With even churches and schools sending newsletters out by email, has the traditional noticeboard been overtaken by technology?

"I think people think everyone's on Trade Me and Facebook but they're national and international ..." Pearson says. "There is a gap between putting something on Trade Me, where you might get someone local and you might not, and the community noticeboard, which is a very local thing."

Pot Pourri used to have a noticeboard but owner Hilary Proctor says it wasn't there when she took over the cafe a few months ago.

"We have people coming in every couple of days wanting to display something so maybe it's something we'll consider. But we're wanting to make [the cafe] a wee bit more upmarket so I don't know," she says.

The Centre City and Gardens New World supermarkets have both removed their noticeboards, saying they were not against having them but there was no room after recent renovations.

Centre City New World owner Craig Nieper says the building's owner had instead installed one in the mall and the supermarket was managing that. Gardens New World owner Ross Parry says people did ask if they could display notices after renovations there but that discontinued after a couple of months.

OUSA puts up hundreds of posters on campus every week, employing two students for a couple of hours each day to take care of eight bollards, eight noticeboards and a sizeable expanse of other wall space.

But with more people using technology to communicate, the association is also using its website, Facebook and a large television screen in the union building to get information to members.

"One thing students do interact with is Facebook," Brown says.

"You put something up there and straight away, you've got people commenting on it.

"But it's a bit of a catch-22," she says, explaining that people stop reading if they are continually spammed with items that don't interest them.

"There's a fine balance with that kind of media."

Reinforcing this, Pearson says students tried to start an online noticeboard to trade textbooks and the like but not enough people used it to make it interesting: "You need a critical mass before you can get something like that going. If there's not enough on it, you won't go back.

"And if you don't go back to a [web] site regularly, you forget it's there, whereas [in the case of] a noticeboard in a cafe or a supermarket, you walk past it every day."

In some places, lampposts and trees become impromptu posting sites. And Pearson says chalk messages on the pavement often advertise events "so people are still getting their messages out in interesting and unusual ways".

Rory Harding created a public noticeboard on the fence of his George St flat out of concern that there was little public space in the city where people could put up posters free of charge.

However, the board is not used as much as it could be, probably because many people do not know about it and perhaps because people have seen the Phantom Billstickers company take over areas that used to be unofficial poster spots used by young bands and other groups with limited money.

"Because they've saturated all the spaces, people have given up, which is a bit sad.

"The company says they help up-and-coming people but more and more, the ads are along the lines of what you'd expect to see on billboards ... rather than local gigs and organisations."

Harding says there are only three bollards in Dunedin where anyone can post notices and that is a "pretty limited area for the public to communicate visually in the city".

But Phantom manager Jamey Holloway says it has only tidied up what was being done in an ad hoc way and there is still plenty of space where people can advertise free.

The company, which produces and places street posters nationwide, leases about 50 poster spots in Dunedin. These include the walls of offices, dairies and alleyways which, he says, might otherwise attract taggers.

In the past, bands often covered up each other's posters and put up flyers without seeking the permission of the building owners, leaving them or the council to scrape them off, he says. In contrast, Phantom pays the property owners, keeps the space tidy and does some free posting for those who cannot afford to pay.

While many noticeboards routinely advertise quiz nights, cars for sale and foreign-language classes, there are quirkier offerings.

One group on the university campus puts up notices that are entirely absurd and without purpose.

Recently one of its flyers featured 10 little tear-off tags, nine of which said simply "Peanuts". The 10th read "I'm allergic".

It's also not unusual to see "Flat with Me" posters where tenants have substituted photos of themselves with ones of sexy stars such as Pamela Anderson.

At Tangente Cafe, an anthropology student is looking for North American students to talk about their impressions of socialising, dating and sex in Dunedin.

"Do you have a rubber?" one stick person asks another, alongside definitions of the word rubber, in English and American slang.

Even the public library displays a notice from "Jim", urging those interested in medieval combat to join 13th-century mercenaries on a "quest for fame and fortune".

Other noticeboards are dominated by those promising health benefits courtesy of homeopathy, fitness training, massage, shiatsu and tai chi.

Circadian Rhythm's notices tend to be along those lines because the cafe's patrons are mostly vegetarian or vegan and into yoga and the like, says owner Sue Harrison.

People sometimes visit just to read the notices and the board has attracted good comments from travellers on Facebook.

While other cafes are "basically there for food" and can't be bothered looking after noticeboards, Harrison likes to keep hers tidy. She pins the messages up herself, checks them daily and sometimes calls people if their notices are starting to look tatty.

However, she refuses to display notices about marijuana and does not allow messages of a sexual nature: "They don't blend in with yoga," she says.

"There's a massage parlour down the road so I tell them to put them up there."

Messages on the Roslyn Village noticeboard are nothing out of the ordinary - cats free to a good home, church fairs and maintenance services - but Shelley Seaman, manager of the Roslyn Book and Toy Centre, says many people "know it's there and go to have a look at what's on".

And it is just that sort of resource that Kitty Brown found useful when she moved to Portobello from Christchurch. Through the noticeboard at her local shop, she bought furniture and met people.

Other notices at the Dunedin Public Library led her to new groups she could join, although she doesn't bother reading them now that they have been moved from near the escalator to a "cold little alcove" just inside the entrance.

Studies show digital noticeboards may offer advantages over traditional ones but natural interactions can disappear as complexity is introduced.

Online noticeboards can be short on content, leaving potential users wary of posting something inappropriate or reluctant to contribute first. Some people are uncomfortable with technology altogether.

This contrasts with the spontaneous nature of paper-based displays, when any surface, from a window to the side of a fridge, can be used.

One researcher wrote that a whiteboard in his department kitchen had remained blank for several years until he left a message, "Has this always been here?" as an experiment.

Within an hour, a response had appeared, followed by a word association game, drawings and, later, pens and magnets.

In no time, the first message prompted further use of the board, perhaps because it indicated that leaving one was "allowed".

Even if the internet was accessible to all, for some people trawling through hundreds of online messages cannot compare with the highly individual, even eccentric, ones to be found on a traditional noticeboard.

When considering how to communicate with students, Kitty Brown thinks there is room for both. The students association has 5000 "friends" on Facebook but with 20,000 students on campus, it needs to use noticeboards too.

"Personally, I really like them," she says. "I always like to find something a bit different going on, and a noticeboard is where you'd find it."