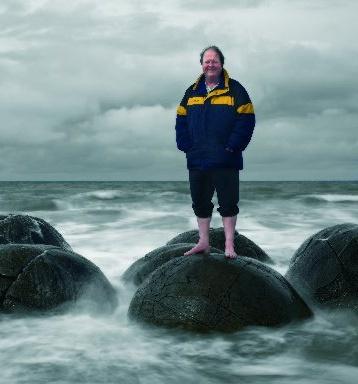 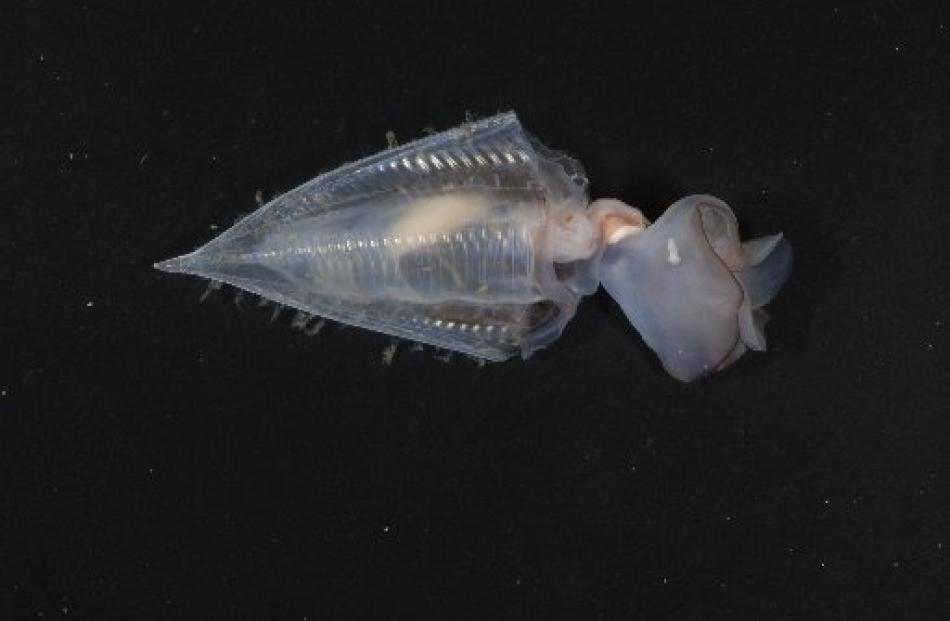 A pteropod or swimming snail. A more acidic ocean is expected to pose a threat to such marine animals. Photo by Owen Anderson/NIWA.

Droughts, wild and unreliable weather and tides lapping at the doorsteps of civilisation.

It is the now-familiar reality of climate change.

Most recently, a World Bank study estimated that by 2050, flood damage in the world's coastal cities would reach $US1 trillion ($NZ1.26 trillion) a year as sea levels rise and global warming triggers new extremes of heat, windstorm and rain.

Similar themes are explored in the report ''New Zealand's changing climate and oceans: The impact of human activity and implications for the future'', published this month by the Office of the Prime Minister's Science Advisory Committee, overseen by Sir Peter Gluckman.

But far from land, a shift is also under way in what Prof Keith Hunter says is often referred to as the forgotten side of climate change.

Prof Hunter, New Zealand's leading scientist in the field of marine and freshwater chemistry and pro-vice chancellor sciences at the University of Otago, has been researching the effects on the ocean of increased levels of CO2 in the atmosphere for some time.

For the past 12 years his research group has regularly sailed out past the continental shelf, off the Otago coast, in the university's research ship Polaris II, taking measurements.

Their work will be published later this year, confirming that the world's oceans are becoming more acidic as the more concentrated levels of CO2 in the atmosphere mix with the waters below.

It was for these insights that Prof Hunter was called to Wellington, when Prime Minister John Key's science adviser, Sir Peter, was asked to put together the report on climate change and its probable impacts on New Zealand.

Together with other scientists from around the country he spent a day sharing research, all of which was then pulled together to fill in the blanks for the Prime Minister.

For scientists, one of the blanks in the understanding of the world's carbon budget was, for some time, a mystery missing third, Prof Hunter says.

Work trying to identify where it was going began about 25 years ago, based on the suspicion it was disappearing into the ocean, mixing in as the result of wave motion where water meets air. It proved demanding to measure.

''By the time we figured out what was going on, we suddenly realised that this is not a good thing,'' Prof Hunter says.

It dawned on researchers just how finely the ocean is balanced in terms of the solubility of calcium carbonate, a critical compound for creatures at the bottom of the food web.

''We didn't initially realise that it wouldn't take much to tip the balance.''

The Gluckman report puts it this way: ''Lowering the pH [acidification] of the water below a threshold creates conditions in which calcium carbonate, which makes up the exoskeleton of many marine organisms, would naturally dissolve''.

The numbers around the changing pH are small. Measurements made by Prof Hunter's team suggest an average pH drop of 0.02 since 2000.

However, the raw numbers are deceptive as pH is a logarithmic scale, like the earthquake-measuring Richter scale.

In the past 150 years the change in pH has been about 0.1, what Prof Hunter calls a ''big step in the wrong direction''.

If pH continues to fall a critical point will be reached when calcium carbonate becomes soluble. And it is expected that will happen first in the coldest of the earth's water, as CO2 is more soluble in cold water.

Those high latitude cold waters are also where the oceans' deep waters are formed, as surface water cools and sinks, taking CO2 with it.

''We think that one of the earliest regions where this will become manifest will be in the Southern Ocean around Antarctica, and we think that those waters will become corrosive to a group of small organisms called pteropods - they are a few millimetres in size, and they are a kind of snail and they are an important part of the food chain - they will experience trouble around 2035.''

Such animals sit at the bottom of a food web that leads all the way up to the biggest of marine mammals.

Because waters around New Zealand are warmer, it is likely to take another century before the problem reaches here, with the possible exception of a few hotspots where deeper waters well up.

Nevertheless, the report says the combined effect of chemical and temperature changes in the seas around New Zealand is likely to have an impact on marine biodiversity and a ''significant impact'' on the fishing industry.

Prof Hunter says the most important effects could be on the larval stage of marine animals.

''If you had, for example, a mass die-off of certain types of larvae, then the adults those larvae would turn into, would be threatened.''

Gathering the information needed to arrive at such conclusions, has taken place on the Polaris II voyages of Prof Hunter's group.

Several times a year for the past 12 years they have sailed out 70km from Dunedin, beyond the continental shelf, taking continuous measurements of pH and CO2 as they go.

At eight different stations they also take samples to take back to the lab.

''It gives us a very accurate description of CO2 in the water column as a function of time,'' Prof Hunter says.

Those results are to be published for the first time later this year, an event that Prof Hunter expects will spark some interest.

What they show is that pH rises and falls during an annual cycle, as plankton photosynthesises CO2 and then dies, but superimposed on that, average pH is falling every year. For the Otago offshore waters, the pH varies from 7.81 in winter to 7.88 in summer.

Among the range of possible responses to the problem is geoengineering, in which steps are taken to counter the pH-lowering effect of CO2.

It gets a passing mention in the Gluckman report, which suggests chemicals could be deployed in localised areas, for example around aquaculture, to temporarily offset changing pH.

However, the report goes on to comment that ''such geo-engineering solutions only offer short-term solutions and may have unintended consequences at a system level''.

Prof Hunter has not been involved in looking at such local-level interventions, but has evaluated global-scale geoengineering, such as iron fertilisation.

''You throw iron dust on the ocean and you absorb CO2,'' he explains.

''There's a lot of interest in that overseas but our research group did quite a bit of work on that and demonstrated that it really doesn't work. And it is fraught with potential problems anyway.''

Geoengineering might work in a more localised way, perhaps in little coastal bays where upwelling water causes acidification, he says.

''I think if you apply scientific principles and you are careful about the possible side effects, I don't see why it shouldn't be looked at.''

Acidification is not the only change going on out at sea. Ocean temperatures are rising alongside the anthropogenic warming in the atmosphere. Indeed the relative flattening of atmospheric temperature increase since 1998 is thought to be, in part, a result of the deep oceans absorbing a larger part of the greenhouse effect.

The report for the Prime Minister suggests changes in marine species as a result, including tropical sharks moving south.

For now, Prof Hunter says the area where attention needs to be focused most urgently is the effect CO2 is having in the atmosphere.

''We have seen nearly a degree of warming already, and the models of atmospheric physics suggest maybe two degrees more. That's really quite severe.''

What needs to be calculated now, Prof Hunter says, is precisely how much more CO2 can be safely emitted into the atmosphere.

He is critical of the approach, outlined this month by Climate Change Minister Tim Groser following the release of the Gluckman report, in which an emissions target was set for 2020 of 5% below 1990 levels.

''The issue is not when you put the CO2 in, it is how much you put in from now on,'' Prof Hunter says.

''We really need to be thinking not so much about how much we can release per year but how much of the total inventory of the fossil fuel that is left, how much are we allowed to release.

''And that answer is not very large. That is where some of us are trying to get the debate to turn.''

One estimate is that the global upper limit for CO2 emissions, to have even a 50% chance of preventing more than 2degC of warming, is 1.8 trillion tonnes, a quantity that will be passed before 2050 at current rates.

''I would have preferred the Government to have said, 'we will limit our fossil fuel emissions to a certain number of billion tonnes and that's it, we will stop','' Prof Hunter says.

''There has to come a time when we have to stop.''

It might take 50 years to stop, but that was where the policy debate needed to be focused.

Further impetus for such arguments is expected to come from the Fifth Assessment Report of the United Nations Intergovernmental Panel on Climate Change, the first part of which is due out next month.

Leaked copies indicate the scientific consensus on the issue has only strengthened, as has the confidence in climate models showing continuing warming.

Prof Hunter has seen some of the work that has gone into it and says it will annoy those still in denial.

''It will receive favourable attention from people who are serious about the issue,'' he says.

''Because it is more definitive than it was last time and that's just what happens, because the science is getting better and more comprehensive.

''The scenarios it describes are quite realistic, I think.''