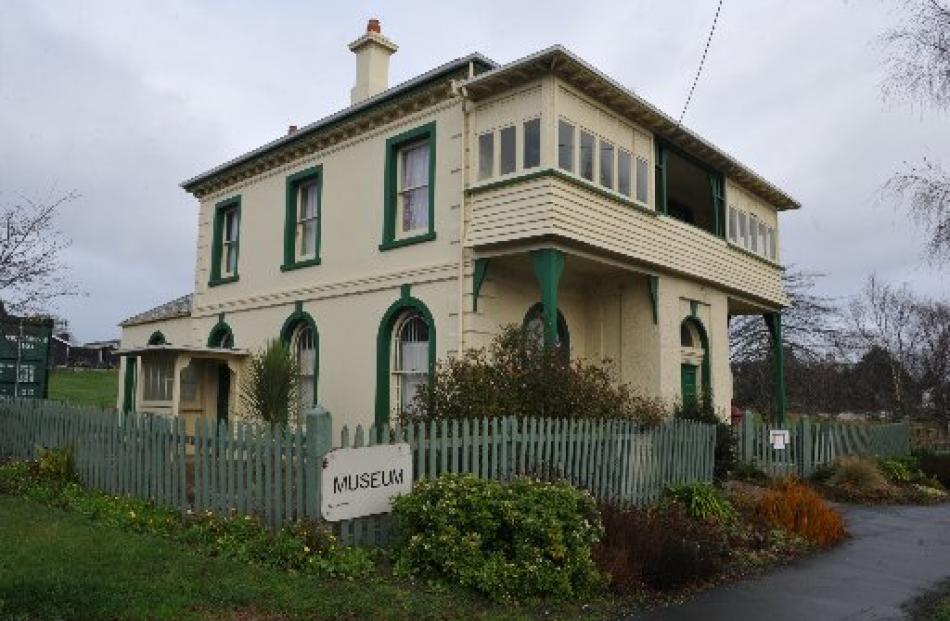 The former Bank of New Zealand at Waikouaiti looks much as it did when the doors opened in 1869. Photos by Craig Baxter/supplied. 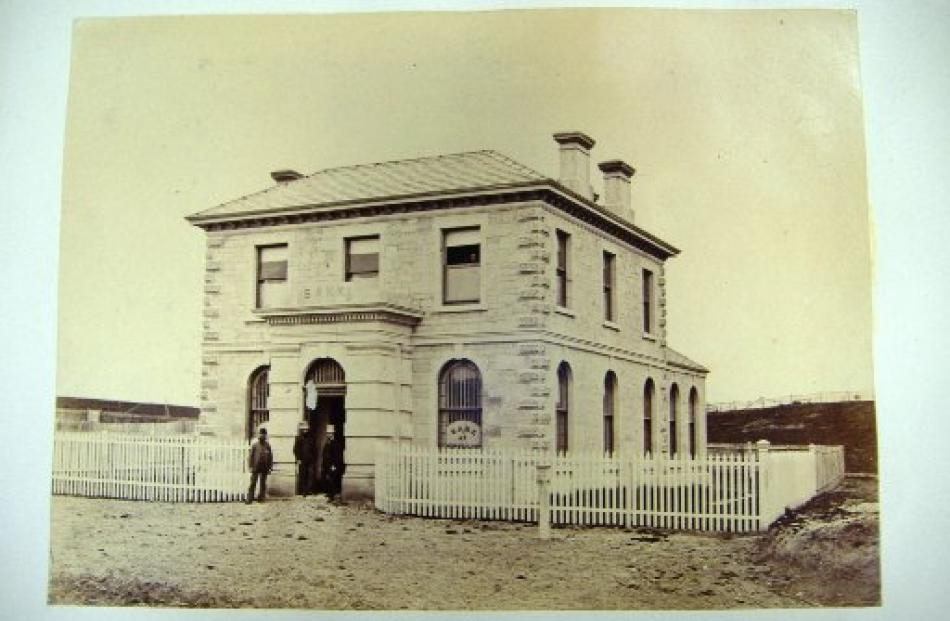 The building, photographed about 1880, was a symbol of reassurance for the local population. 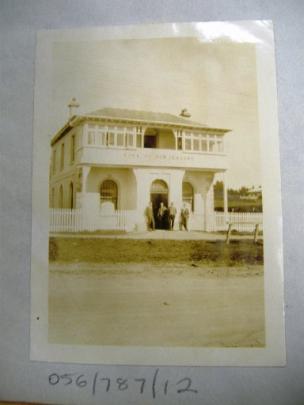 The 1927 additions included a first-floor balcony. 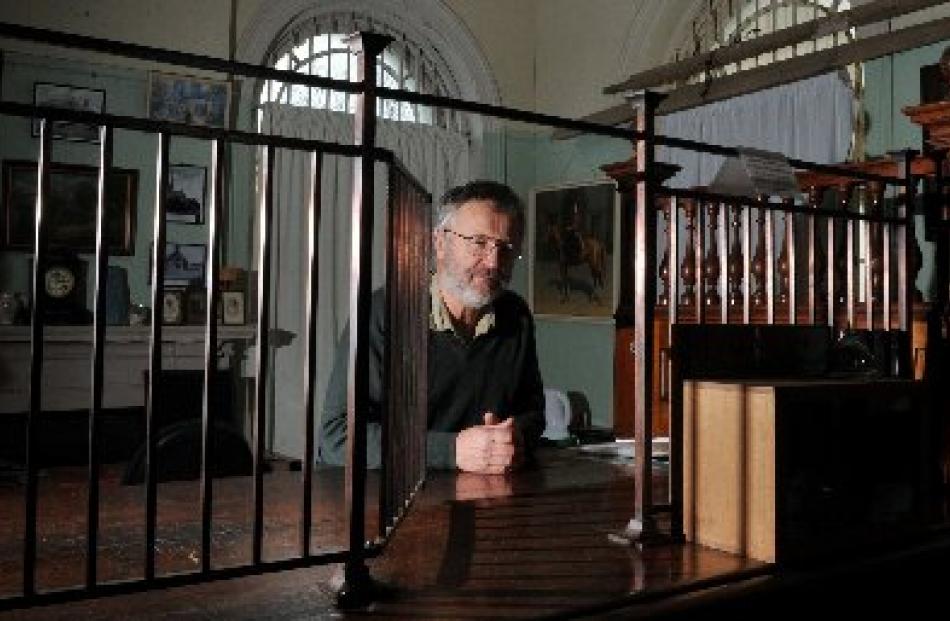 Bill Lang at the 6m-long counter made from rimu, kauri and totara and the grille which was restored in his garage. 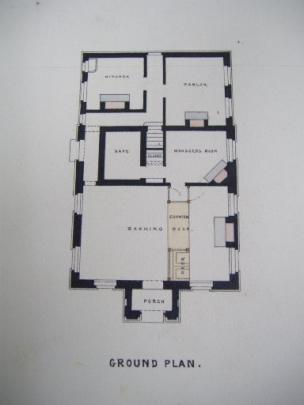 When plans for the bank were revealed, The Southland Times described it as a ''substantial building … 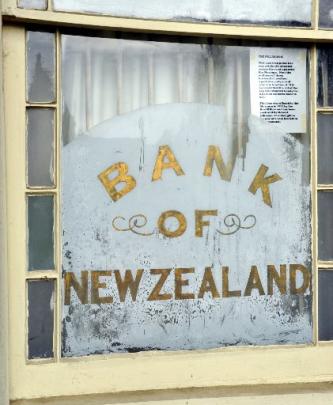 ... without much pretension to architectural effect'' but to be built from ''the beautiful light-brown Pleasant Valley stone''. 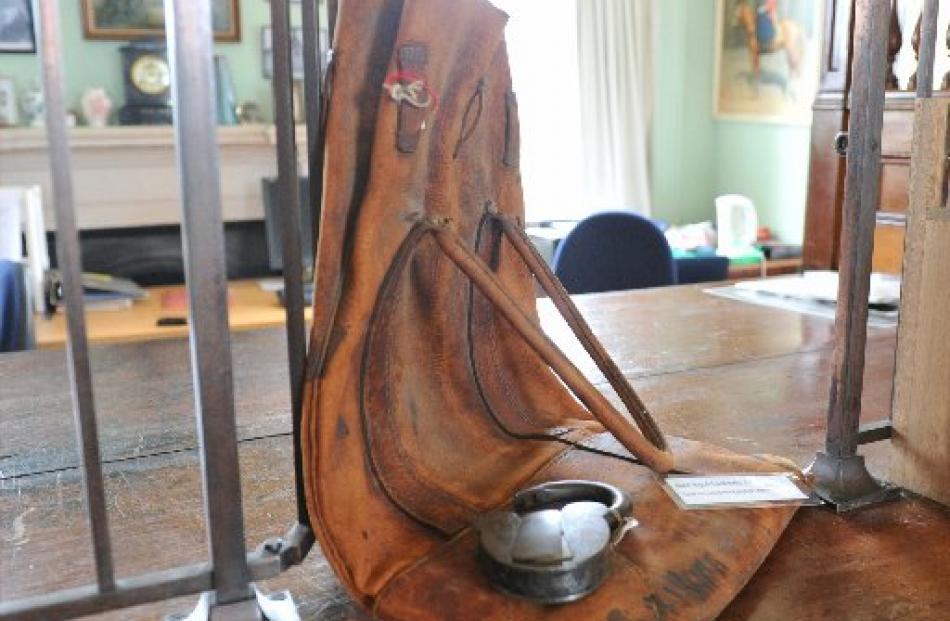 The museum's 9000 artefacts, collected in an area stretching from Evansdale to Goodwood, include a Cobb and Co leather gold bag... 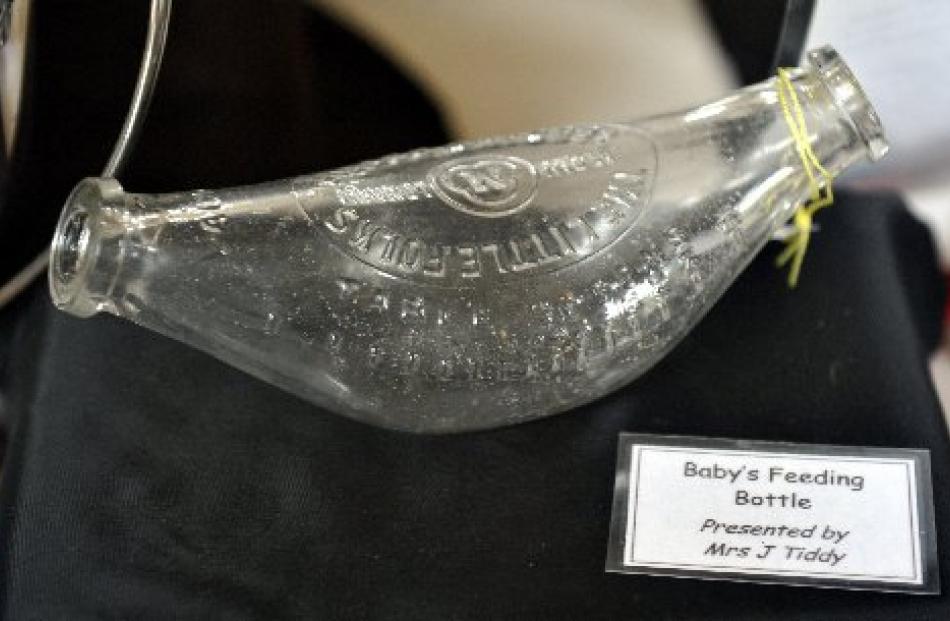 …. and a baby's feeding bottle. 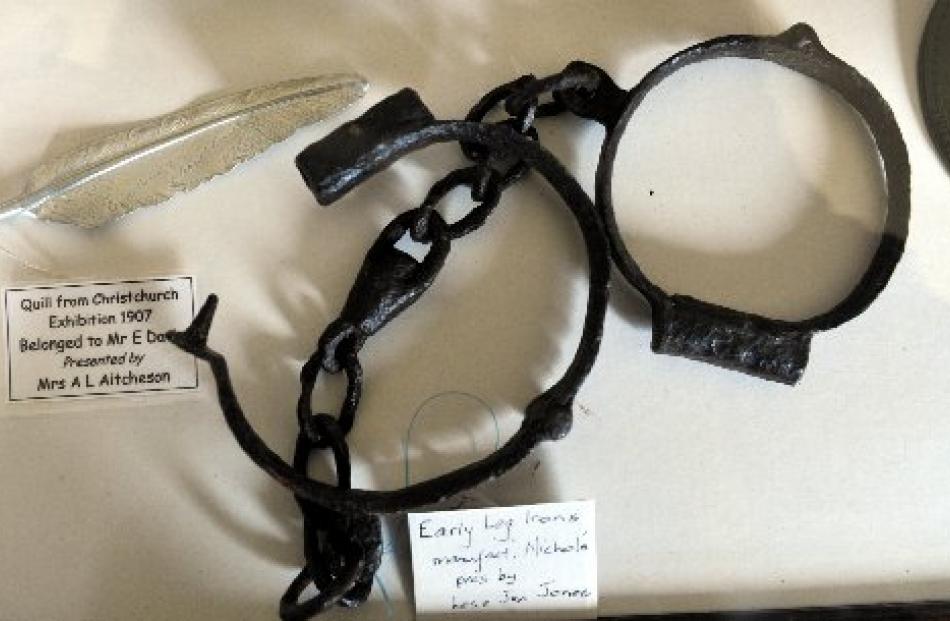 A pair of leg irons made in the United States in the mid-19th century were worn either by prisoners doing forced labour or by patients in mental institutions who were thought to be an escape risk. 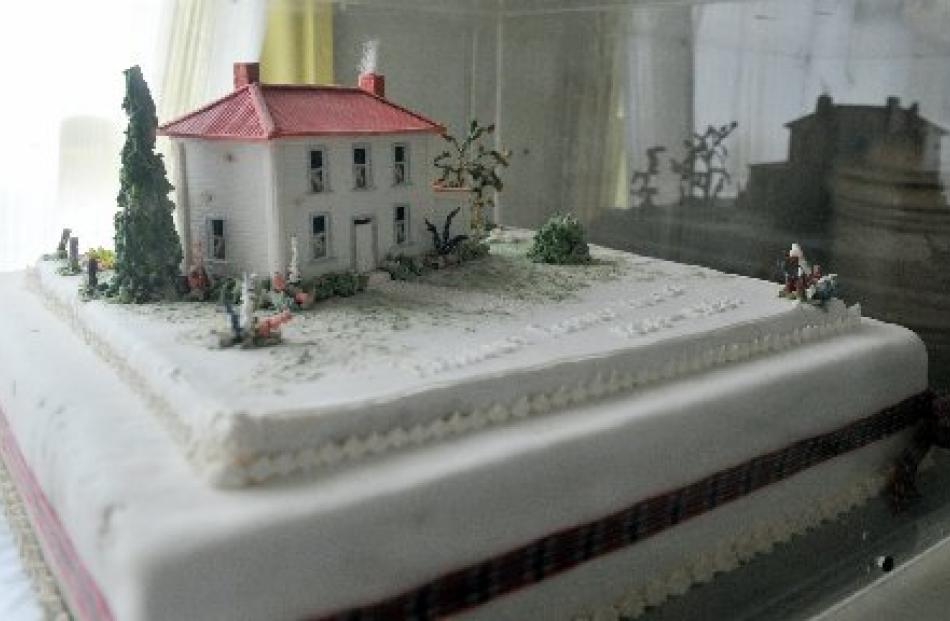 A cake made in 1988 for a local anniversary is preserved under glass. 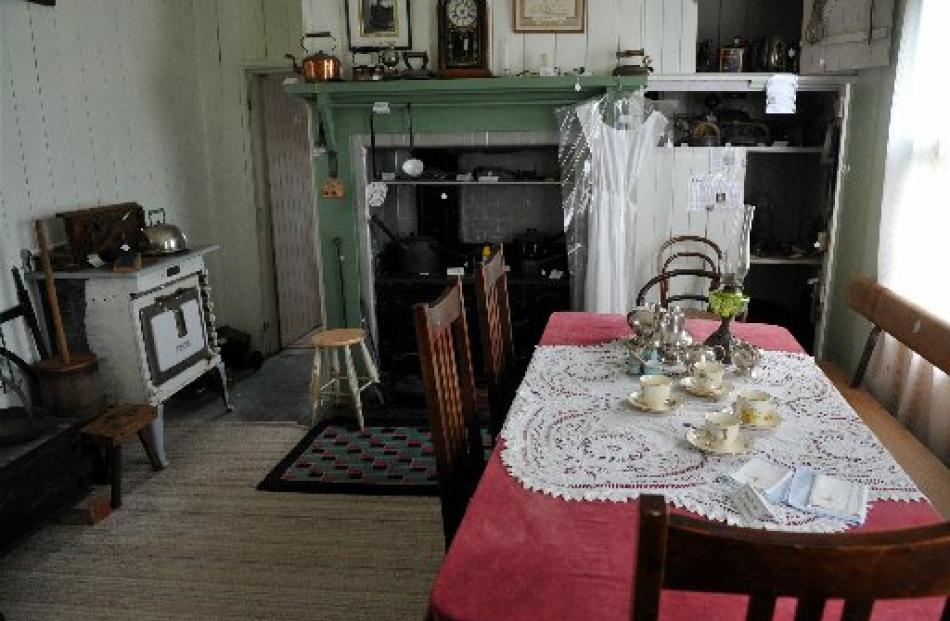 The re-created kitchen is popular with the estimated 1000 people who visit the museum each year. 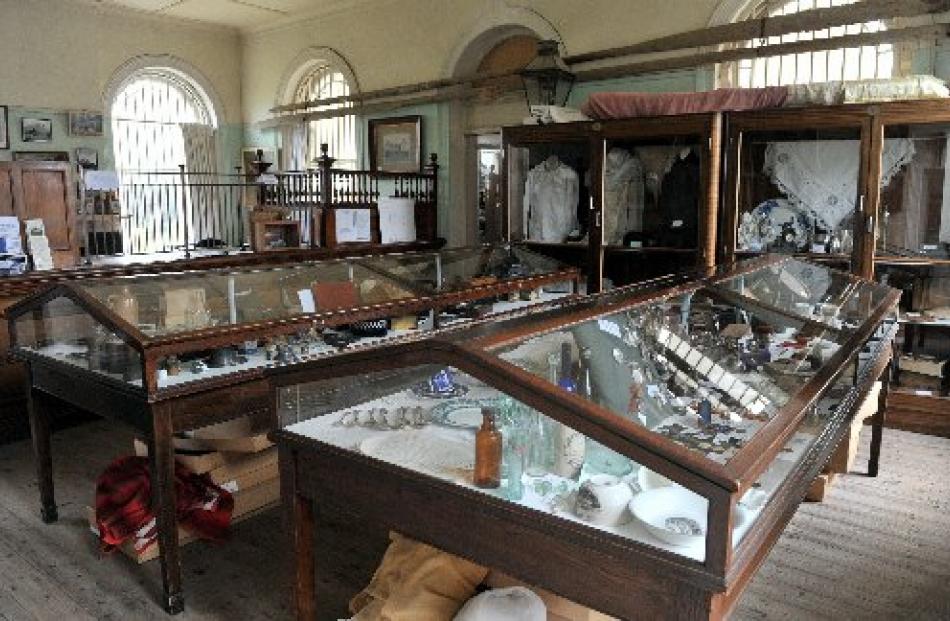 In the former banking chamber, oars from a whaleboat are mounted on the wall and display cases hold all sorts of items related to the local area.

The former Bank of New Zealand in Waikouaiti is a rare survivor from an early period in New Zealand's banking history. Kim Dungey steps inside.

The wooden counter gleams like the gold that once passed across it. The grille above has a hinged section through which customers handed their most precious possessions.

The banking chamber of the former Bank of New Zealand at Waikouaiti looks much as it did when the doors opened in 1869.

Now a museum, the property contains 9000 artefacts ranging from a leather Cobb and Co gold bag to a metal skull clamp from Seacliff Asylum.

But the star attraction is the building, which was recently given the New Zealand Historic Places Trust's highest heritage listing.

One of only four banks on its register dating from 1870 or earlier, the category 1 property has been largely untouched since it was last upgraded in 1927 - so the 6m-long counter made from native timber is original, as are the manager's office where loans were negotiated and the strongroom, with its heavy metal door and vaulted ceiling.

Now a quiet seaside town of about 1100 people, Waikouaiti was a long-standing Maori settlement before Australian merchant Johnny Jones bought a whaling station at Karitane and established a farm at nearby Matanaka in 1840.

The farming community was the first organised European settlement on the South Island's east coast, preceding Dunedin's by several years.

But it was in the 1860s that Waikouaiti (initially known as West Hawksbury) really boomed, becoming a landing place and a service town for the Dunstan goldfields at a time when the main transport route to Dunedin was by sea.

When the town's first bank, also a BNZ, opened in 1864, it provided a safe place for prospectors to deposit or exchange their gold while waiting for a ship to take them to Dunedin.

The timber building was in Beach St, then the town's main business area with 14 hotels and a shopping arcade.

Soon larger, more secure premises were needed and the two-storey bank that now houses the museum opened in the main street.

For many years, its vault was the only one between Dunedin and Oamaru, holding cash, bonds, deeds and jewellery, which came through the port of Waikouaiti.

The bank's classical design was from the pencil of Robert Arthur Lawson, the Scottish-born architect who moved to Dunedin in 1862 after winning the competition for the design of First Church.

Lawson would become one of the country's most significant 19th-century architects, producing Seacliff Asylum - then the country's largest public building - Knox Church and Otago Boys' High School, as well as the Bank of Otago and the adjoining Bank of New South Wales in Oamaru.

However, the Waikouaiti BNZ was, like many of the country's early banks, a modest building.

Mainly of cavity brick construction, it also used limestone, which was hewn with handsaws from a hillside between Goodwood and Pleasant Valley and carted by dray into Waikouaiti.

An exposed section of wall shows the shells, hair and other binding and filling agents that were incorporated into the mortar.

The manager lived on site, with family rooms at the rear and sleeping quarters above.

At some times in its history, the BNZ was a full bank branch; at others, merely an agency. In the 1960s it closed for good and was offered to the Waikouaiti Early Settlers Association for £1.

The association has since become the Waikouaiti District Museum Society and the museum, the Waikouaiti Coast Heritage Centre, but what has not changed is the commitment of the members.

They include a 92-year-old woman who, once a month, walks from the opposite end of town to clean the premises with a feather duster.

Twenty-five volunteers take turns to staff the centre, mow the grass and tend the garden, also turning their hands to maintenance and conservation.

Last year, when the grille from the counter was found at the back of a shed, it was taken to the garage of committee member Bill Lang and put through an electrolytic rust removal process in a tank he had made from offcuts of steel.

At the end of the procedure, 85% of the original copper finish remained and the yellow scum on the surface of the tank included whale oil, which would have been used to lubricate the grille's hinges.

The building might have gone up on the back of gold, but it is now run on a shoestring.

The $5 adult admission fee helps pay for the electricity, water and rates; the operating budget of about $3000 a year was until recent years covered by members' credit cards, and electricity was reinstated only in late 2011 after 50 years without power.

At that stage, the catalogue could be transferred from cards to computer, says Bill's wife and museum curator Kay Lang, drawing the curtains and throwing blankets over display cases to protect the contents from light.

Some visitors want to know about their great-grandparents - the museum holds information on about 200 families as well as school and cemetery records and registers of births, deaths and marriages, she says.

Others are intrigued by the collection, which includes agricultural implements, Maori artefacts, World War 1 memorabilia and domestic equipment such as washing machines and ovens.

One room has been furnished as an early schoolroom, another has equipment from Seacliff Asylum and a third houses photos of pioneers.

There's an assortment of family bibles, the fireplace from Johnny Jones' living room, and a pair of leg irons that members suspect were worn by a patient in a mental institution or by a prisoner doing forced labour.

Much more is stored in sheds around the district because of a lack of space on site.

While young girls love the prams and the cradles, the boys head straight for the guns, says Mrs Lang, adding that a young staff member once took the bank's revolver from its drawer when the manager was away and was playing with it in a back corridor when a bullet lodged in a post at the foot of the stairs.

Oars displayed in the banking chamber are thought to be from the whaleboat Maori Girl, which was built in 1871 for a co-operative venture by local Maori and is now held at Toitu Otago Settlers Museum, 40km away in Dunedin.

''We asked them for the Maori Girl back 'cause it comes from Waikouaiti,'' Mrs Lang says, smiling.

''There's a bit of banter goes between.''

Mr Lang, who has worked professionally in museums in Australia, said in many cases the objects are the only ones of their kind left in the region. But the cool, damp conditions make the building unsuitable for long-term storage of historic items, so once funding is secured, they will be moved to a $1 million, 400sq m exhibition centre to be built behind the existing museum.

The new premises will house an exhibition gallery, a workshop and storage and public research facilities, also serving as a visitor information centre.

The banking chamber, strongroom and manager's office will then be strengthened and refurbished and the two buildings linked by a glass atrium.

''It will be almost like Dr Who's Tardis. You'll go back in time and each room will be dressed in the period.

"It won't be something that's endowed with lots of electronics.''

The former bank is not just a building, but the society's ''major artefact'', he says.

''It's got context. It hasn't been messed around.''

See it
The heritage centre on the corner of State Highway 1 and Kildare St, Waikouaiti, is open 10.30am-2.30pm on Friday, Saturday and Sunday in winter (June 1-August 31), 10am-4pm from Wednesday to Sunday in summer, and on request.