Romance in the air 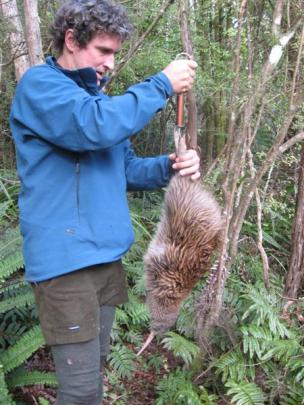 One of the young kiwi caught for weighing and measuring. Photos by Elton Smith/Image by Michael and Varlerie Fay. 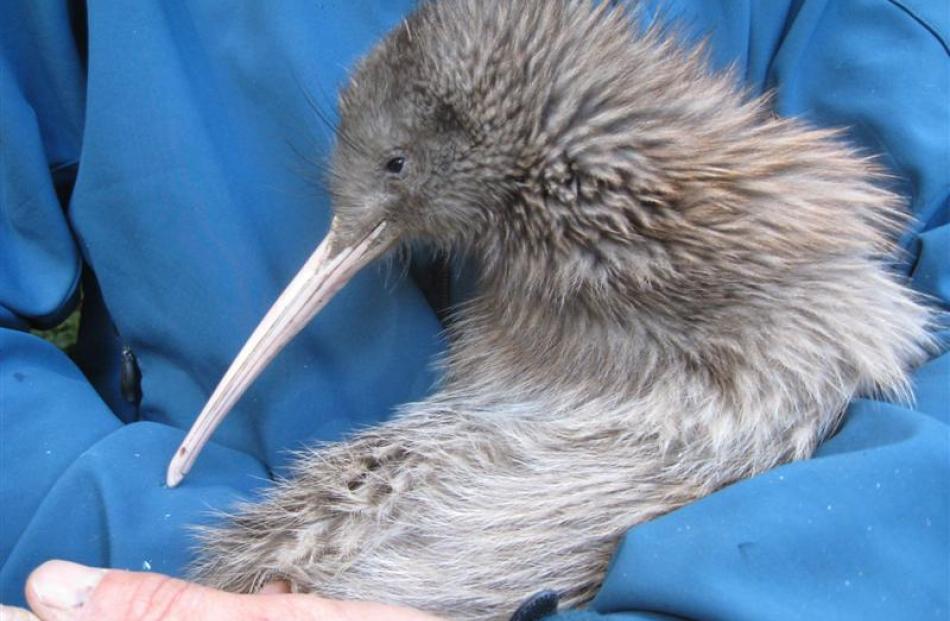 Chris Rickard weighs one of the Haast tokoeka at Orokonui Ecosanctuary. 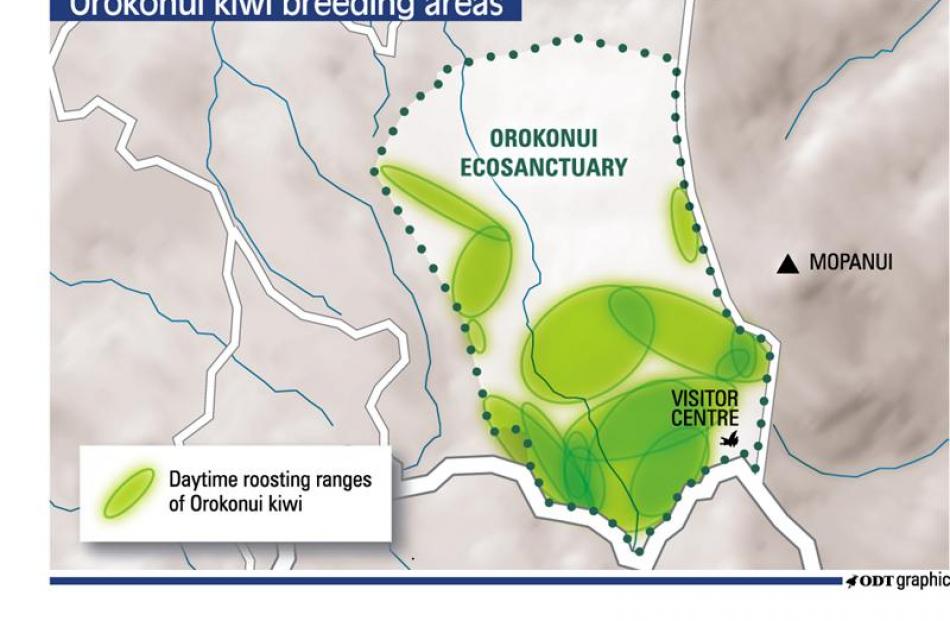 Graphic showing the distribution of Haast tokoeka in Orokonui Ecosanctuary. All 16 birds have settled into the upper (southern) half of the ecosanctuary. Blueskin Rd is shown at the bottom of the diagram, with the visitor centre and car park at bottom...

After two translocations in October 2010 and October 2011, the kiwi at Orokonui Ecosanctuary are poised to begin breeding.

The first kiwi to be seen and heard in a Dunedin forest in 140 years, the 16 juvenile Haast tokoeka released into the fenced, 300ha wildlife haven appear to be forming pairs.

No-one knew the gender balance of the 16 Haast tokoeka, the rarest kind of kiwi, at translocation time. They are so hard to sex as young birds and for all we knew, they could have all been male. But on the basis of bill measurements alone, taken recently when we recaptured all 16 to remove their transmitters, it seems there might be a fairly even split, perhaps even eight females and eight males.

The transmitters were removed because the previous scheduled recaptures reassured us the birds were thriving at Orokonui, in fact, putting on more weight than they might have in their usual habitat on South Westland mountain ranges; and because the process of recapture is intrusive for the birds and often arduous and time-consuming for the search team. The kiwi can run fast in the daytime through dense bush.

For each six-monthly recapture, kiwi specialist Chris Rickard was engaged to lead the exercise, with my assistance and the help of volunteer Valerie Fay and rangers Matt Thomson and Kelly Gough. Monthly monitoring of kiwi transmitter signals was carried out by Valerie Fay during the daytime, when the kiwi, curled up in their favourite burrows or ground-level dens in dense vegetation, were unaware.

These monthly checks, undertaken for the past 20 months, have generated a set of maps showing where the kiwi travelled in the ecosanctuary and their present home ranges.

They have all settled in the upper half of the ecosanctuary, and several visit the open grassland areas near the visitor centre at night, judging by the presence of probe holes and droppings.

At the recent recapture, four kiwi were found very close together, although in separate burrows, and in another area a male was found quite close to two females. All of which suggests we could have at least three pairs in the process of establishing territories.

All the kiwi were weighed and measured. Females are generally heavier than males and have longer bills. The heaviest birds were 3.1kg and 2.8kg, and the longest bills were 122.7mm and 120.8mm. Feathers from all 16 birds were taken for DNA profiling, which will confirm the sex balance and also give us excellent baseline data for when the Orokonui population of Haast tokoeka grows.

The plan now is to leave the kiwi to themselves for five years, until 2017, when another recapture will take place with the help of trained dogs. In the meantime, we can get an idea of their distribution through setting up call stations and listening out for their quite raucous calls. Kiwi respond vocally if they believe there is an intruder in their territory.

Haast tokoeka are among the slowest breeders of all six varieties of kiwi. Nonetheless, we are looking forward to being able to supply chicks back to their homelands, where trapping programmes are keeping a lid on predator numbers.

How many kiwi pairs could Orokonui hold?

Well, as many as 30 pairs has been suggested, certainly a lot more than the present population. A third transfer of juvenile Haast tokoeka is on the cards. It is probably essential to accelerate the breeding rate.

Members of the public have an opportunity to step into this newly created realm of the kiwi.

Orokonui After Dark tours, which take in twilight feeding by our kaka, the forest parrot, are being relaunched soon. These guided night tours are presented in two phases. A search for kaka is followed by a session listening and looking out for kiwi. Between the two phases, while waiting for darkness to properly set in and the kiwi to become active, the groups will spend time back at the visitor centre for refreshments and a talk about the extraordinary biological and cultural significance of kiwi. The speaker for the first few tours will be Dunedin natural history author Neville Peat, who has written three books on kiwi over 20 years, the most recent being Kiwi - The People's Bird, published in 2007 by Otago University Press.

• Elton Smith has been the conservation manager at Orokonui Ecosanctuary for the past six years. Valerie Fay has worked as a volunteer for a similar period, leading the kiwi monitoring work and the revegetation programme, and caring for 15 young tuatara in a nursery building.

Wild Ways appears in the Magazine section on the first Saturday of the month.