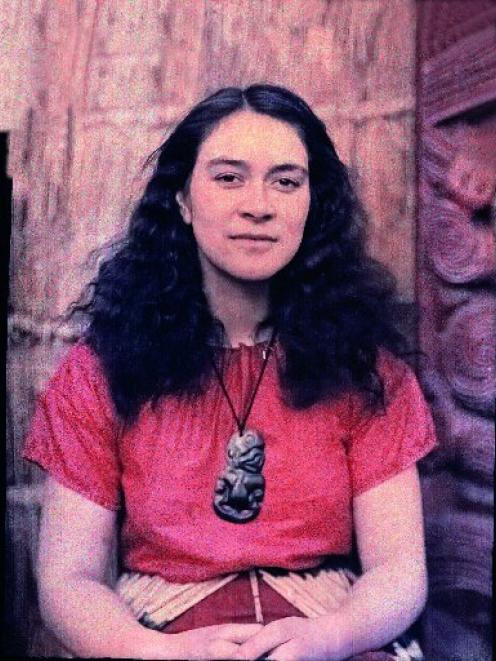 Evaline Skerrett in London in 1911 in a rare autochrome (colour glass plate) taken by the Lumiere Brothers, of France. Photo: Courtesy of Erica Thornton-Radal
Long before Kiri Te Kanawa was winning bouquets, a southern songbird had the musical world at her feet, Angela Skerrett Tainui writes in this extract from Tangata Ngai Tahu, People of Ngai Tahu.

Ngai Tahu songstress "Princess Iwa" was an ambassador for Maori culture, art and music who helped to shape the cultural perception of Aotearoa New Zealand on the international stage. Evaline Jane Skerrett was born at Rakiura on 30 October 1890, the fourth of George and Hannah Skerrett’s ten children. Both of Eva’s parents were Ngai Tahu, and she was a descendant of Pokene, a principal Ngai Tahu chief of Otakou. She also traced her ancestry through the American whaler Captain West, the Whenua Hou sealer Joseph Honor, and Charles Skerrett, of England.

Eva was raised in Rakiura, Bluff and Invercargill. She was still young when her whanau moved to Bluff to live with her poua, the artisan joiner Te Here West. An adventurous and resourceful man, Te Here was a formative influence upon the young Eva. Bluff had a significant Maori population, and Eva immersed herself in Ngai Tahu culture both at home and in the extended community.

Eva and her whanau were regular attendees at St Matthew’s Anglican Church, where they sang in the congregation choir under the direction of Mayor Nichols. She received piano lessons from the nuns, and performed with whanau in local kapa haka and community events.

The whanau participated in the annual titi harvest on Tia Island, and Eva learned the skills of making poha and weaving kete while sitting on the veranda, at the feet of her mother Hannah, singing waiata and speaking Maori. Hannah was fluent in Maori, and people often visited to hear her speak; one of them was Apirana Ngata, who noted the beauty of her Ngai Tahu dialect. As a "well known" Southland family, the Skerretts often found their home filled with "crowds" of visitors, who were always kept well fed with "dozens of buns and a cook up of mutton birds". Hannah and George were active in Ngai Tahu politics and land rights campaigns, and George held leadership positions within Bluff’s Ngai Tahu community.

In 1909, Eva was recruited as lead singer of Makereti (Maggie) Papakura’s Maori concert party for a world tour. Given the stage name "Princess Iwa" — acknowledging her chiefly lineage and giving her an "air of mystery and dignity" — Eva took with her the hei tiki and feathered korowai of her Ngai Tahu ancestors.

Her first international performance was to an audience of around six thousand people — swelling to eight thousand on the weekends — at the Melbourne Exhibition in 1910. The second was at a model Maori village in Sydney, where the "music critics were in raptures" over the "phenomenon" that was Princess Iwa.

In 1911, the concert party travelled to England to represent New Zealand at the Festival of Empire celebrations, and at the coronation of King George V. It was at these performances that Eva was discovered by leading operatic singing teachers Madame Nevada and Madame Blanche Marchesi; the latter declared she "did not believe there was a more beautiful voice in the world than Iwa’s". With their encouragement, Eva began to carve out a successful career in the music halls and variety stages that were both ubiquitous and popular throughout the United Kingdom and Europe, among them the Palace Theatre (fulfilling a childhood ambition), the Albert Hall and the Palladium. Her repertoire included national anthems, sacred songs, traditional English ballads and operatic pieces, alongside her signature songs, Hine E Hine (Princess Te Rangi Pai) and Waiata Poi (Alfred Hill). Eva also performed other waiata Maori, including Hokihoki Tonu Mai (Paraire Tomoana). She designed her own sets, props and costumes including korowai, poi and mats, and choreographed her own stage acts. Eva believed that her culture was in danger of becoming extinct, and in interviews with the British press she explained her intentions: "Above all," she declared, "I do wish to make my people’s history better known". While representing New Zealand in London, at the Daily Mail’s Ideal Home Exhibition in 1932, she demonstrated the art of traditional weaving outside a carved whare.

In 1914 Eva travelled to Salisbury Plain to sing to New Zealand soldiers who were already in England when war was declared. She toured with Lena Ashwell,who organised large-scale entertainments for troops at the front, and with Madame Ada Crossley’s concerts. She performed in hospitals and at benefit concerts; was a member of the Anzac Concert Party entertaining at soldiers’ camps and canteens; and sang at Victoria Palace in aid of the Anzac Club and Buffet. In 1916, two thousand Anzac soldiers attended a farewell reception at the Alexandra Theatre in Hackney, where Eva performed and then presented them with a bouquet. She also opened a sports event, singing the national anthem and Land of Hope and Glory: Her Royal Highness Helena Victoria presented the prizes.

Although Eva had made plans to return home, the outbreak of the First World War made this impossible. She regularly sent photos and gifts home to her family, but never returned to Bluff. Eva continued her charitable work during the Second World War, working closely with New Zealand High Commissioner William Joseph Jordan, and focusing on the "welfare of New Zealand servicemen and women stationed in Britain" by hosting groups on leave. She showed them around London, and provided food and entertainment. She performed for the New Zealand forces in 1942, and acted as contact point for the Red Cross parcels sent from Southland.

Described variously as beautiful, refined and stately, with a tender, haunting and electrifying voice, Eva, as "Princess Iwa", the "Maori Nightingale", captivated audiences with her charismatic performances for more than thirty years. When she died in London in 1947, aged fifty-six, it brought to an end a journey that had taken her and her culture from Rakiura to the world stage.