Simple treats your dogs will love 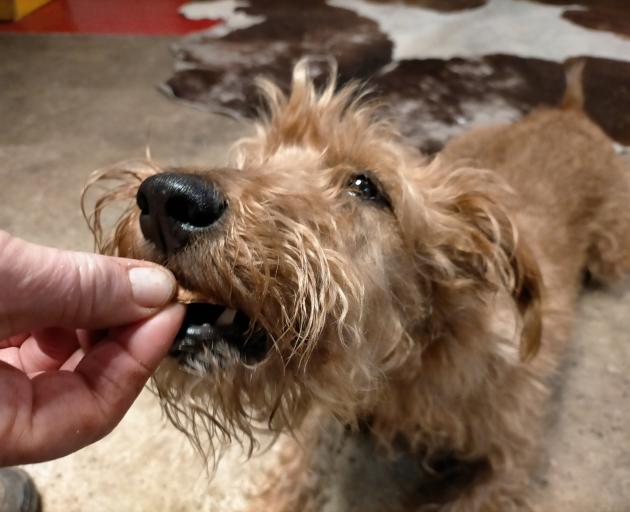 Fodla, the Irish terrier, gives the new doggy treats a try. PHOTO: HILARY ROWLEY
Our new but second-hand dog had no idea what these two strange humans were on about, and was completely confused about the rules in this new home of hers, writes Hilary Rowley.

However, there is something all dogs understand, it is a sort of universal language word for "good dog”. We humans call it a treat.

Overwhelmed by the excitement of having a new member of the household, we bought a packet of treats — little biscuity things in cute bone shapes and about as expensive as giving the dog oysters au naturale to reward her good behaviour. Actually, a dog could not give a stuff about cute shapes, all they want is the yummy meat flavour, but it is really not practical to constantly carry around bits of meat in your pocket (I have tried it with messy results).

To save money, I have had a couple of experiments at making tasty wee dog biscuits and they were very successful, both at turning out crisp and dry and good to store, and in terms of clever tricks from Fodla (an Irish name for an Irish terrier), such as sit, stay and come.

This is not a fussy recipe; dogs are not fussy, and as long as the treats stick together and store well they can be considered a success.

I use petfood mince, but not chicken as it is mostly too unethically farmed. The flour part of the mix can be any flour, but I prefer to feed gluten-free flours to dogs for their easy digestion. 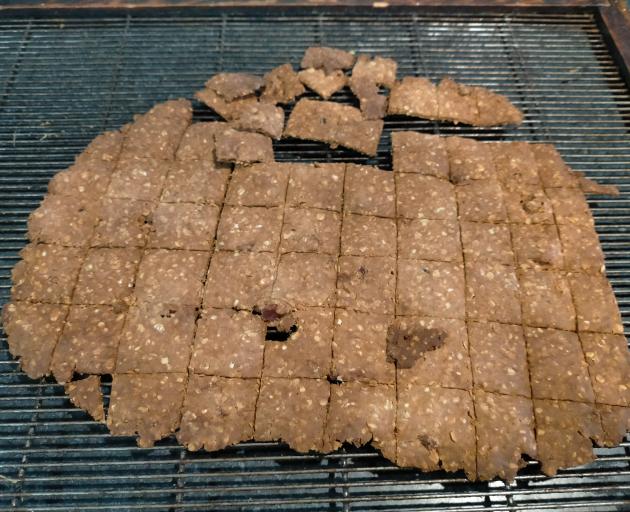 IN A BOWL PUT

2 Tbsp of peanut or other seed/nut butter

Knead ingredients into a stiff dough. Divide into two balls. Roll out on to two oiled baking sheets. Score into shapes with a knife.

Cool completely before storing. If they are not completely dry they will not store.

Carry a bag around in your pocket with a few treats in it. Hold out a treat and say ‘‘stop’’ firmly to your dog. The dog will stop all right, for the offered food if for nothing else, and before you know it your old dog will be doing new tricks.