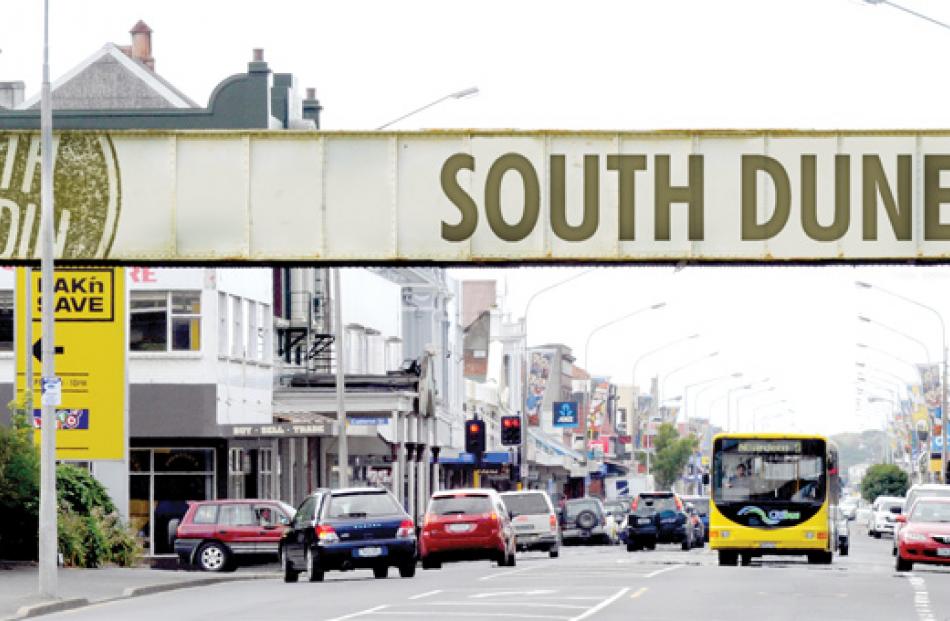 Among proposals to rebrand South Dunedin is to use the railway bridge on King Edward St. The logo at the left of the bridge in the top image was designed by Otago Polytechnic students.

Will some street alterations, and new seating and planting, be enough to pull the down-at-heel South Dunedin commercial centre out of the doldrums? Mark Price takes a look.

There is no jostling in South Dunedin's commercial heart.

There are generally few, if any, heavily-laden shoppers, men and women in suits or high fashion, idling teenagers, buskers, pushchairs, signboards and cafe tables.

In fact, at times, the footpaths are virtually a pedestrian-free zone.

The South Dunedin Business Association is well aware of that and wants change.

President Jane Orbell: "It is a harsh environment out here. We don't have a lot of trees and soft places, so to speak."

And, this year, the major part of the much talked about, much consulted on, much altered plan will be put into action.

The council's contribution will be to redesign some areas around intersections to make them more pedestrian friendly and to tackle some contentious parking issues.

It has already subsidised the painting of some of the area's buildings and made improvements to the Lorne St "pocket park".

But council urban design special projects manager Emma O'Neill says the council is not simply "throwing money at the problem".

"It's not as simple as putting some furniture in and some nice new planting in ..."

Ms O'Neill refers to a list of "actions" that encompass the seats and planting but also festivals, cycle facilities, marketing plans and dealing with vacant shops and parking issues.

"It's the cumulative outcome of all those actions that I think have been identified as being important rather than just a lick of paint," she says.

"But, the lick of paint and the physical works are sort of up there, and those are the ones we've wanted to get under way as soon as we can."

While some "actions" are complete and some are almost ready to go, others are still at "the head-scratching stage" - things such as a heritage trail and pedestrian links between King Edward St, the Mayfair Theatre and the Dunedin Gasworks Museum.

How to market the revitalised South Dunedin to the rest of the city and the rest of the world - and how to present its new identity to the media - is another "action" still in the works.

At the beginning of last year, the council set 24 third-year Otago Polytechnic student designers to work on a marketing plan for South Dunedin.

Their aim, says polytechnic school of design head Caroline McCaw, was to "highlight the rich working-class histories of the area for the benefit of the mainly working-class residents of the suburb today".

Gentrification, or turning South Dunedin into some trendy middle-class hangout, was not the aim.

The council planners, says Ms McCaw, want to "bring the centre alive" because of its rich history.

"They are really passionate about it," she says.

The students spent weeks studying the area from every angle and, from that, developed 14 concepts. These were narrowed down to three, which are now ready for use.

McCaw: "We wanted to create some designs that would inspire and delight the people of South Dunedin."

Perhaps the most significant of these was a South Dunedin "brand" that harks back to the "cast badges" on heavy steel components of industrial machinery, and allows for products and marketing material to be branded "South Dunedin".

The students suggested a "rustic" image to contrast with the nearby brightly coloured Warehouse and Mitre 10 stores.

The students also designed street furniture reflecting South Dunedin's industrial connections, and a series of images based on the natural environment of South Dunedin before human occupation, when it was a coastal swamp.

"They came up with a series of birds and trees that used to live in that area and they made the graphics to put on empty shop windows," Ms McCaw says.

Many South Dunedin shop windows are in need of something new and fresh if they are to attract more shoppers.

On a window-shopping expedition this week, the Otago Daily Times found frontages ranged from the pristine to the decrepit.

There are the clean, but bland, corporate faces of the banks, loan merchants and health centres.

There is the clutter of the 11 purveyors of second-hand goods - some interesting, even enticing, others dull and unimaginative.

There are shop windows that are grimy, featuring yellowed notices attached with tape and adhesive putty.

There are seven outlets for Asian takeaway food of one form or another and two offering Turkish food.

There are nine empty shops - four of them in the condemned Brocklebank Drycleaners building.

And then there are the South Dunedin businesses of long standing.

Owner Neville Chin says that as well as the empty shops, there are others that are "weak" and on month-to-month leases.

He remembers a time when South Dunedin was quite busy, with Thursday night and Saturday morning shopping to itself.

Now there is more competition and, also, those who come to South Dunedin to shop have less money to spend.

"Everybody is after that discretionary dollar, whether you be in retail or food or hospitality or entertainment."

So will the council's revitalisation plans help the retail community?

"It definitely will. Every bit helps," he says. "Last year, the city council spent a lot of money giving landlords subsidies to paint their facades. That did a world of good."

Lindsay Campbell, owner of Alex Campbell Menswear, says he has been "banging the drum" over redevelopment for 20 years.

He blames past councils, in part, for the decline of South Dunedin and believes they "actively dissuaded" development.

"I've heard there's various chain stores that have tried to open up in South Dunedin, and they needed to be slightly outside the zoning, and they were persuaded to go into more central areas."

Why?"Well they [the council] had vested interests in town with some of the property they owned."

He notes the amount of council spending on central-city parking buildings, while only two small parking areas have been provided in South Dunedin. Now he is looking forward to the council changing parking rules to make narrow side-streets around King Edward St less attractive to all-day commuters.

"That should have been done many, many years ago.

"[They are] filled up with commuters rather than consumers.

"There will be howls of protest when it happens but it's going to be great."

He believes restricting the time people can park will balance out the loss of 10 parks in King Edward St in the areas where footpaths are to be widened.

However, he and others are keen for parking to remain free in South Dunedin, and Ms O'Neill says: "At the moment, there's no proposal for paid parking."

One other thing not on the council's agenda at the moment is the library many in South Dunedin would like to see - something Ms Orbell believes would "complete the package".

"I think that we do definitely need areas in South Dunedin where people can congregate and do things and stick around and talk and chat."

She believes it is particularly important for the elderly, those without cars and those who do not like the busyness of town.

"There are a lot of people that don't like town."

The business association will continue to push for a library and she is "still feeling confident that it will come".

"But it won't come yet because we are all aware of the commitments the council has made to the city with other things and I know their money is stretched."

The new paint schemes - even the green and white of the Pacific Trust Otago building on the corner of McBride St - seem to have met with approval.

However, there are some reservations about the value of more seating in an area often affected by stiff sea breezes.

Tony McCarthy, of Mobility Scooters Otago, looks out on one area to be redeveloped.

"It'll be interesting to see if somebody sits in them."

And, he says, those who use the existing seats outside the South Dunedin hall leave the area littered with cigarette butts and chewing gum.

"It's usually just bloody disgusting. The more seats you have around, the whole place is just going to look more disgusting."

Ms O'Neill believes the physical work - due to begin this winter and be completed before the end of the year - will be a positive step forward for South Dunedin.

"It's providing an opportunity for people to spend a bit longer there and, hopefully, spend a bit more money.

"It's improving the pedestrian function - the safety for pedestrians and motorists and cyclists and mobility scooter users ... as well as creating more opportunity for people to sort of hang around a bit longer, and making the retail centre feel and look a more pleasant place to be."

Ms Orbell says there are businesses waiting to move into South Dunedin.

"I definitely don't think that South Dunedin is going to go down.

"I think it's already on the up, just with the people waiting to move here."