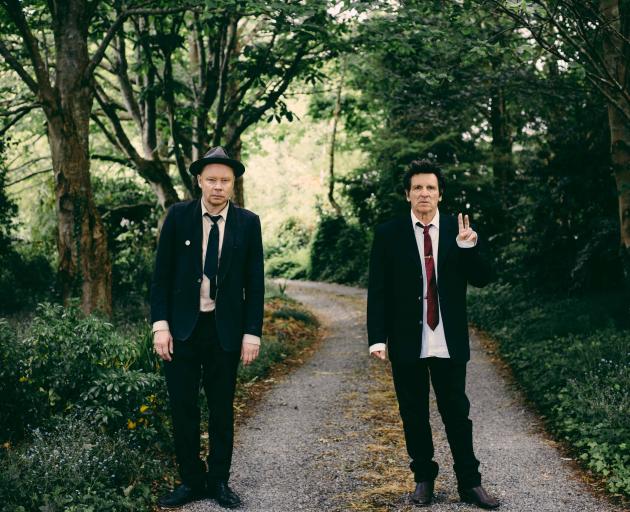 They don't make 'em like this any more. Nor write a song like these. Excuse the cantankerous slant but it is hard not to fall under the spell of the recent collaboration between two Kiwi journeyman songwriters.

Delaney Davidson and Barry Saunders have hit the Kiwi highway this month, fresh off the release of their collaborative full-length Word Gets Around. A rough and raw exertion with nods to Tom Waits and Hank Williams, you just want to grit your teeth while clutching a tumbler of scotch.

In the modern climate of saturated pop production and stylistic cross-pollination (don't get me wrong there is plenty of good stuff out there), sometimes you just want to hear something stripped to bare songwriting fundamentals.

"I've always made music as I saw it and heard it," says Davidson.

"And I had some belief for a long time that I was a sort of artist who could have a wider audience appeal. The longer I do it for, the more I feel how much of an illusion it is in a way."

Aside from a MOR audience's readiness for a good old fashioned blues jaunt, another myth is knowing everything about Davidson's fellow songwriting cowboy Barry Saunders.

For more than 30 years, Saunders has been best known as the longstanding frontman of Kiwi perennials The Warratahs.

Davidson and Saunders met while sound-checking for the Churches Tour with Tami Neilson and Marlon Williams in 2015. Divine intervention ensued.

"I think I saw a side of Barry that I hadn't seen before on tour," said Davidson.

"It was kind of darker than what I had seen before. He has a nationwide profile but spending a bit of an intimate time with him you can see all these flavours rolling around with his music and his presence. I felt like I wanted to uncover a bit more of that."

Davidson says this feeling "clearly" manifests itself in the record.

"You listen to that album compared to any Waratahs album, it's obviously a lot darker. It's rawer, it's more rocking."

Hank Williams and influential pulp writer Raymond Chandler are other touchstones on Word Gets Around.

Setting the tone is the music video for the album's title track, as a bucolic Kiwi setting is filtered through an old German expressionist lens, both artists with an occasional confrontational glare.

"We wanted to tell a basic story without giving away too much info."

Not over playing their hand is another approach the pair had in the studio. Davidson says they wanted to keep things immediate.

"The drums are super minimal, there is a lot of fills there, it's based on loops.

"It's just holding the beat and holding the groove. The other songs have had a similar treatment, we're not going for a huge variety of feels and flavours, we keep really stripped-down. I think it works for the whole album."

The duo wrap up their tour dates in Dunedin tonight alongside band members Mark Hughes and Chris O'Connor where they'll be playing album cuts and other material.

Davidson is playing a handful of local arts festivals before heading overseas to Europe in the coming months.