Within the predator-proof fence at Orokonui Ecosanctuary, 25 minutes’ drive north of Dunedin, many cherished New Zealand species roam and thrive. But 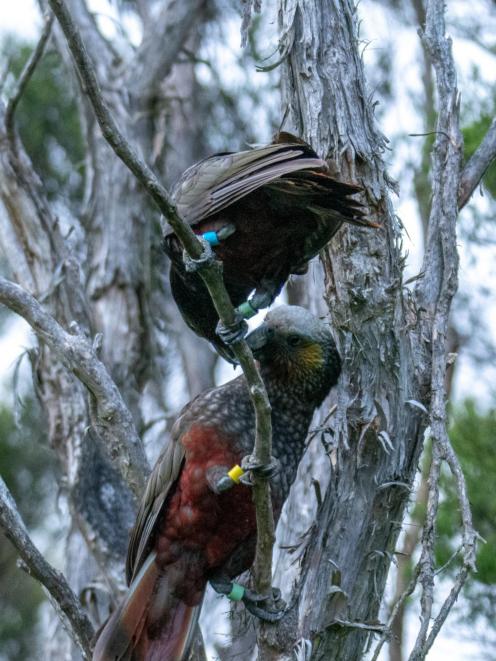 Kaka are social. These two are named after the coloured bands around their ankles: Blue-Army and Army-Yellow. PHOTO: OROKONUI ARCHIVE
unlike the kiwi, tuatara, jewelled gecko, Otago skink or takahe, the inquisitive kaka can leave the safe boundary of the sanctuary to explore the wider world, sometimes with deadly consequences.

Orokonui has recently launched a citizen science database for the public to report kaka sightings and to keep track of where their favourite kaka has been seen or heard. The website address is kakadatabase.orokonui.nz and has a profile for each individual kaka in the Dunedin population, identified by the coloured tags around their ankles; their left-foot colour written first, then right-foot colour. If there are two bands around the leg then the top colour is written first then bottom colour.

Kaka explorations have also been monitored by University of Otago postgraduate student Scott Forrest. In August, 10 kaka were fitted with Lotek PinPoint GPS tags by Scott and Orokonui staff, supervised by two Christchurch Department of Conservation staff who work with kaka and other species with this kind of technology. These GPS trackers cost $2000 each and will be on the kaka for four to six months, after which the batteries can be recharged. They record the kaka’s location every three hours, and using an accelerometer, it records the activity of the kaka every minute.

There is a window of a few hours daily when Scott can download the data using a receiver.

These GPS tags sit on the kaka a bit like a backpack; there is a loop that sits above the wings, and a loop that sits below, which are connected in front of their breast with a ‘‘weak-link’’ of a few light strands of cotton within plastic tubing. This weak-link will snap and release the tag if the harness gets caught on anything, and the harness will fall off after the cotton degrades. The kaka preen the harness and tag into their feathers, so all you can see is the aerial.

Scott’s findings so far show the kaka spending quite a bit of time around the forests at Mihiwaka and around Cedar Creek. This is quite different from the Kaka Database observations, which show kaka regularly visiting Doctors Point. Another interesting insight from the GPS data is the kaka consistently have an active period between about 1am and 3am, which illustrates there is still much to learn about their behaviour.

Results have shown that the kaka mostly spend their time within the sanctuary, where they can access specially formulated parrot pellets from tin hoppers fitted with a trigger-tread no other birds are heavy enough to depress.

Within the fence, they can nest in cavities of old gnarly broadleaf trees without the threat of stoats attacking incubating females or the vulnerable chicks. While some of the older kaka barely leave Orokonui, some of the younger kaka explore the landscape more widely.

Besides predator control there are a few things the community can do to help curb kaka deaths. To keep kaka safe outside the sanctuary, it is paramount that people do not feed the kaka. The wrong food, such as nuts, can have detrimental consequences, such as birth defects. Feeding the kaka may incite bad behaviour (like a seagull at the fish and chip shop), or encourage them to stay in unsafe areas where predators roam. Kaka need the stimulation of searching for food to keep their intelligent minds active or they may become victims of mischief. Bored kaka, who associate human structures with food, may tamper with the likes of powerlines.

Kaka need an environment with big old trees with dry cavities where they can lay two to four eggs in a bed of woodchips. They love the dark purple drupes of the native tree fuchsia, and are often seen using their powerful hooked bill to rip away bark and rotten logs to reveal delicious huhu grubs or tree sap. They are also equipped with a brush tongue for sipping nectar from kanuka or lemonwood flowers. They are sometimes seen using one foot to hang upside down from a branch and another to hold a mahoe berry.

If your place is not on the kakas’ rounds then you can always come and experience these wild entertainers at Orokonui ecosanctuary. The bird feeders often host hopping kaka displaying their playful antics. The cloud-forest canopy can be filled with melodious parrot calls, contented throaty ‘‘gong’’ noises and raucous squawks. Their acrobatics delight, showing off their distinctive white crown and flurry of scarlet wings.

Scott feels very lucky to be involved in the kaka project and would like to thank Dunedin City Council, OSPRI and High Country Contracting for their funding. Orokonui would also like to thank the Institute of Public Works Engineering NZ for helping towards plans to attach VHF units to 10 captive released kaka. Please get in touch with the sanctuary if you would also like to support this initiative. 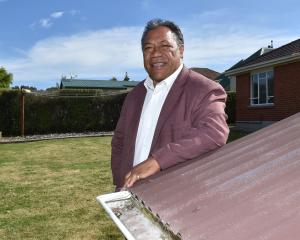 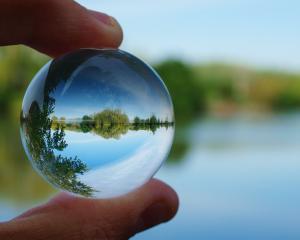