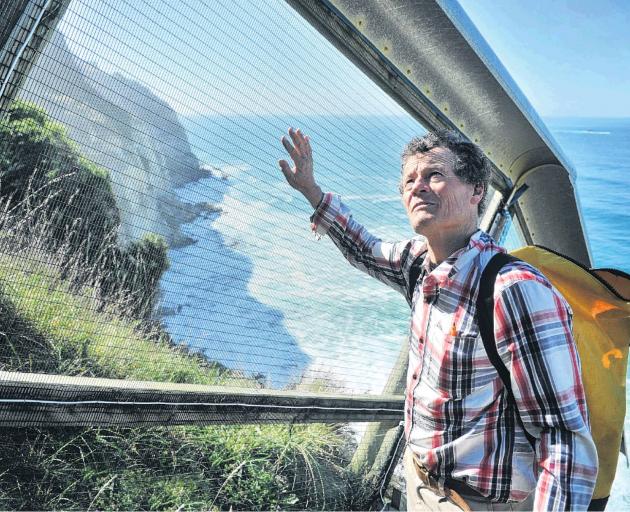 Graeme Loh and the fairy prion predator-proof fence above the St Clair cliffs. PHOTO: CHRISTINE O'CONNOR
Our own backyards provide great promise in the push towards predator-free by 2050, but we are going to have to get our hands dirty, writes Maureen Howard.

"They are the most gentle birds,'' Graeme Loh explains of the small colony of fairy prions that breed on the cliffs of St Clair, Dunedin. This is the only place on mainland New Zealand where these petite tube-nosed sea birds have established a breeding colony. The reason they are there at all is because it is a very difficult place for any mammalian predator to reach.

"It's a 25m free-fall to get to the breeding colony,'' Loh explains.

Loh, a proficient abseiler, former ranger with the Department of Conservation and recent recipient of Forest and Bird's prestigious Old Blue award, discovered the colony on the cliffs near his home. He has been studying the birds since 1994. In 2013, a predator-proof fence was built to expand their breeding area and protect their existing one. Bolstered by trapping within and outside the fence, the hard work is paying off. Sooty shearwater have set up a new colony and last year six chicks fledged. Loh is hopeful fairy prions will nest at the new area soon too. However, he is willing to wait. Despite the fence and predator control efforts, there have been a few fence breaches and he does not regard the area as completely safe just yet.

An estimated 25 million birds are killed every year by introduced mammalian predators. At least 51 species have been lost since humans and their mammalian companions arrived on New Zealand's shores. While most of the remaining species hang in there in a state of slow decline, some conservationists are now arguing that with a changed human mindset and renewed determination these species could once again flourish.

Imagine a tuatara sunning itself on your rockery by day and a kiwi fossicking through your leaf litter by night. It is not impossible according to urban ecologist Assoc Prof Yolanda van Heezik and reintroduction biologist Prof Philip Seddon, of the University of Otago. In a recent paper, they published the responses from 18 conservation professionals in New Zealand about what could be returned to urban areas in New Zealand. The list reached 80. It turns out that urban areas are particularly well suited to supporting significant biodiversity, including threatened species.

But first we would need to remove invasive mammalian predators; such as rats, stoats, mice and hedgehogs.

"Unfortunately, conservation in New Zealand is all about killing things,'' Loh says. "It is grim. I've been involved in the biodiversity part of things for many years, and most of my work has been working out better ways to kill more of the right stuffs at the right time.''

When it comes to trapping, people power counts. In towns and cities there are more of us to set and check traps regularly to reduce predator populations enough to allow biodiversity to flourish. 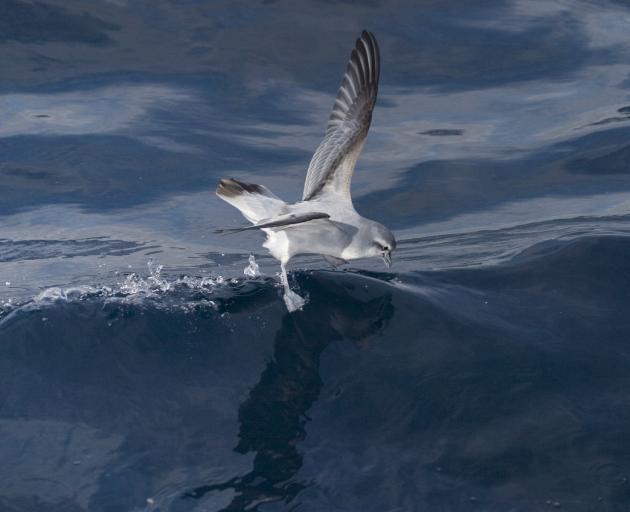 A fairy prion skims across the water. PHOTO: IAN SOUTHEY

Film-maker and former Otago Peninsula Biodiversity Group chairman Rod Morris believes "it's only in places where people can control the predators that native birds and insects and reptiles can stand any chance of surviving''.

Lowland areas, where people live, also have richer soils and a much greater carrying capacity for biodiversity compared with our largely mountainous national parks.

For Dunedinites, urban wildlife recovery begins at home. According to van Heezik, gardens make up 36% of the total urban area of Dunedin. Collectively they are the single largest area of green space in the city and have the potential to connect significant high biodiversity areas. In Dunedin, home gardens essentially link the Dunedin Botanic Garden with the Town Belt and Orokonui Ecosanctuary.

There has been renewed interest in trapping since 2016, when then Prime Minister John Key announced that New Zealand had adopted the goal of becoming predator free (of possums, stoats and rats) by 2050. Despite scepticism, the goal reignited passion for eradication among community groups, and even suburbs, across New Zealand. A boost of $80 million in the Labour-led Government's May Budget has also helped.

In the capital, Predator Free Wellington is a collaborative project between councils and the Next Foundation. A key impetus for change there is the predator-proof Zealandia sanctuary, from which kakariki, kaka and other birdlife has been spilling out into surrounding suburbs. Volunteer trapping by 140 households in the adjacent community of Crofton Downs means these birds are managing to survive and breed outside the fence.

AT the other end of the country, Predator Free Dunedin (PFD) has a vision to make Dunedin the first predator free city in the South Island. The group is a newly formed umbrella body that includes 20 organisations, such as Ospri, the Dunedin City Council, the University of Otago and a range of community groups.

"It's a huge partnership of a diverse range of organisations,'' says co-founder Rhys Millar, who is also a founder of the predator-trapping Halo Project that surrounds the Orokonui Ecosanctuary, and the Predator Free Peninsula project.

Earlier this month, the umbrella group received $4.33 million over five years from Predator Free 2050 Ltd as well as $1.5 million from Otago Regional Council and $850,000 from the DCC over the same period. Together with funding already received by Ospri, PFD now has an operational budget of $15 million.

Ecosanctuaries in Wellington and Dunedin have helped advance the cause of biodiversity in those communities, a lesson not lost on those in other areas. 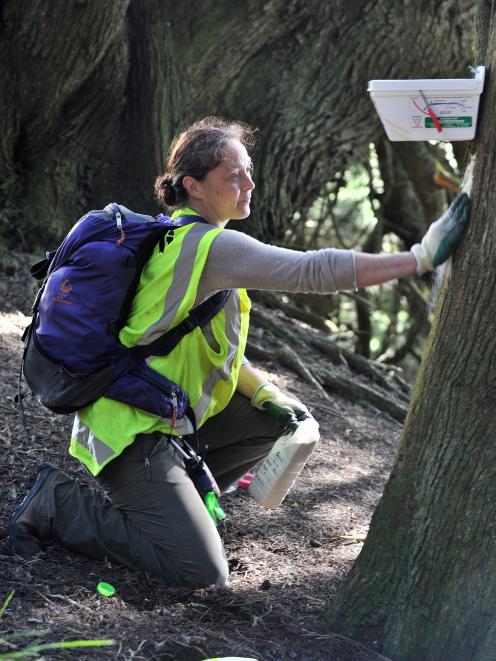 Canterbury does not yet have a similar facility, which some Christchurch conservationists think disadvantages their efforts to bring back native wildlife.

"Canterbury is the biggest region and population centre in the country that doesn't have access for its citizens or its visitors to our charismatic and endangered wildlife,'' says Dr Colin Meurk, of Manaaki Whenua Landcare Research. "There's a certain degree of jealousy.''

Meurk is an enthusiastic advocate for multiple ecosanctuarys in the region. One he champions is the Waitakiri Sanctuary proposal at Avon-Otakaro red zone, that includes Travis Wetland, the biggest urban wetland in the country. Another could be on Banks Peninsula, he says.

For all Meurk's enthusiasm, the goal of predator-free by 2050 can still seem remote.

However, Morris is increasingly optimistic. On his own property there has been a marked increase of birds from long-term trapping for possums. He is also heartened by other examples, such as the increase in kiwi that has been experienced by Backyard Kiwi, a community-led initiative at Whangarei Heads.

For an effective pest eradication mission, not every backyard is needed. Morris estimates that just one in five backyards needs to have a trap for effective possum removal.

"I'm not telling anyone what to do on their property.''

And not everyone has to trap.

Putting out a "chew card'' or ink tunnels to collect data about predators' whereabouts and habits is also useful.

Loh is enthusiastic about the informational value of trail cameras.

"I had a couple of rats in my house and despite having several types of traps, it wasn't until I put out a trail camera and saw where the rats were getting in that I was then able to successfully trap them.''

It is early days for the Otago Peninsula Biodiversity Group's outreach work in urban Dunedin. But so far, gentle education is working. Morris is optimistic about their chances of removing possums from the peninsula.

"It's absolutely amazing how quickly the community is buying into this. Ordinary people are now starting to put out a possum trap as regularly as they mow their lawns or put out their recycling.''

Building that sort of support for the return of native biodiversity involves a profound feat of imagination: people have to believe in a world they have never seen.

In doing so, they overcome what Prof Peter Kahn, of the University of Washington, calls "environmental generational amnesia''. It is the idea that each generation perceives the environment it is born into as normal, even though it is an impoverished version of what previous generations experienced.

Environmental generational amnesia makes the work of ecosanctuaries vital in creating a glimpse of generations past, allowing us to connect with species no longer able to survive in a "predator rich'' New Zealand.

Fortunately, urban ecological restoration creates its own momentum. As people experience more contact with wildlife on their own turf, their sense of stewardship over native biodiversity increases.

With such momentum, once rare species can once again become part of everyday lives.

Long before 2050, we are likely to have fairy prions breeding behind the predator fence at St Clair, and possibly beyond it. With intensive trapping and other measures, species such as kaka from Orokonui Ecosanctuary could breed outside the fence again. South Island Robins are already exploring beyond the fence and showing signs they are starting to breed.

Their fate lies in our hands.

Totally agree with exterminating rats, mice and opossum. But we seem to have missed the effects of the 1.6m domestic cats and possibly 14m feral cats that take 10-50 birds a year. We should also look at totally restricting cats and dogs that take our birdlife.