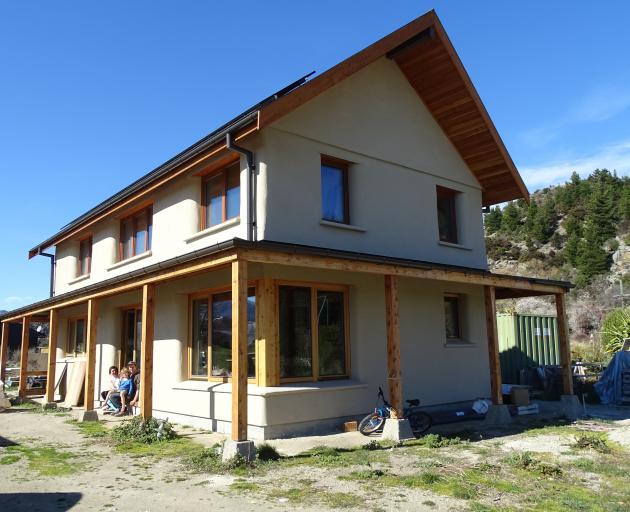 The Eyers’ soon-to-be-completed straw bale house in Luggate. PHOTOS: KERRIE WATERWORTH
There is no place quite like home, but  one Otago family knows no other New Zealand home will be quite like their house when it is finished, Kerrie Waterworth reports.

The days are starting to get longer and warmer but the heat is on for builder Ben Eyers to finish the fit-out of his straw bale house in Luggate by the beginning of November. Ben is one of the organisers of the 2019 Earth Building Association of New Zealand national conference in Cromwell from November 2-3, and his home will be open for a conference tour of "natural built'' houses. 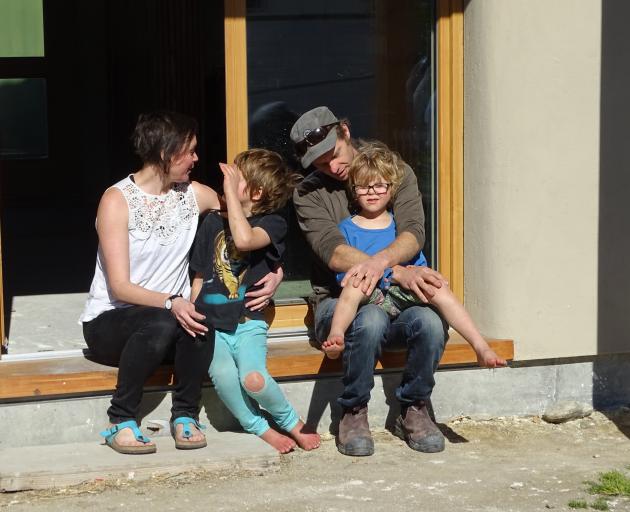 The Eyers family, Jessica, Finn (8), Louis (6) and Ben.
It will be the fourth straw bale house Ben has built but what makes this one unique is his wife Jessica has designed it to meet the criteria for a Passive House.

"We feel it is like the crux of everything, the holy grail of sustainable building. There are no others in New Zealand and only a handful of straw bale Passive Houses in the world,'' Jessica says.

A passive house is one in which the interior climate of the building is maintained at a comfortable temperature with virtually no heating or cooling - hence passive. Its core features highly insulated walls, roof, floor, windows and doors and an airtight building wrap. It has no thermal bridges (heat-loss areas such as window frames). It incorporates a whole house ventilation system that removes moist, warm air from bathrooms and kitchens and, via a heat exchanger, the warmth in this air is used to heat fresh air being vented into the house from outside. 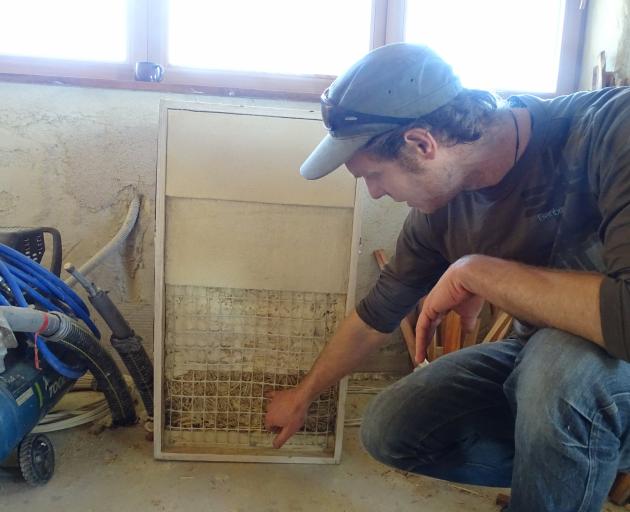 "It is great to see Jessica and Ben collaborating on such a really ground-breaking project, and really focusing on trying to use local materials such as straw and earth plasters,'' Jason says.

Jessica Eyers studied straw bale building as part of her master's degree in environmental architecture in England before moving to Wanaka in 2005 and meeting Ben in 2006. Ben came to Wanaka via the Coromandel where he "built some random things,'' before deciding to undertake a building apprenticeship. Having always had an interest in sustainability, Ben didn't find building conventional houses very inspiring. So, in the final year of his apprenticeship he built a house for his parents designed by Jessica and using alternative building materials - their first project together.

"It was a rammed-earth and lime plastered timber-frame house. I had done heaps of research and reading on airtight construction, so it was kind of a passive house with a highly insulated envelope. Mum and Dad have never needed a winter duvet on their bed in that house.'' 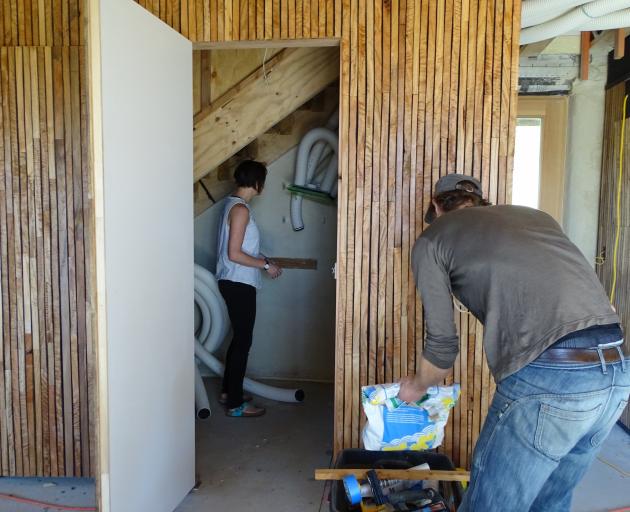 Much of the ventilation system is out of sight under the stairs.
In 2014, Ben and Jessica bought a block of land in Luggate big enough for two buildings and started "experimenting'', building a straw bale garage in the front.

"It was really just working out formulas for the plaster pump and the earth floor and just being willing to make a few mistakes and see what happens,'' Ben says.

Both the Eyers had done some "Wwoofing'' (labour in exchange for food and accommodation on sustainable and organic farms and properties) in Europe where they had stayed in straw bale homes and on their return completed a straw bale building course in Geraldine.

"We'd known for a number of years that straw bale construction was the way to go in Otago because it ticks all the boxes,'' Jessica says.

"It is local, it is natural, it is low in energy and it gives you incredible R value (the thickness of the wall and the straw combine to give a very good resistance to heat loss or increased heat) and we love how it looks aesthetically, as well,'' she says.

In 2017, they both attended the European Straw Bale Gathering in Venice, where Ben presented a paper on straw bale building for passive houses and in January 2018 he began construction on their own passive straw bale house, designed by Jessica.

"You have to model the energy of the building so you can put the whole design into an energy model software and make sure you are reaching the passive home targets, such as airtightness and an efficient ventilation system to be certified,'' Jessica says. 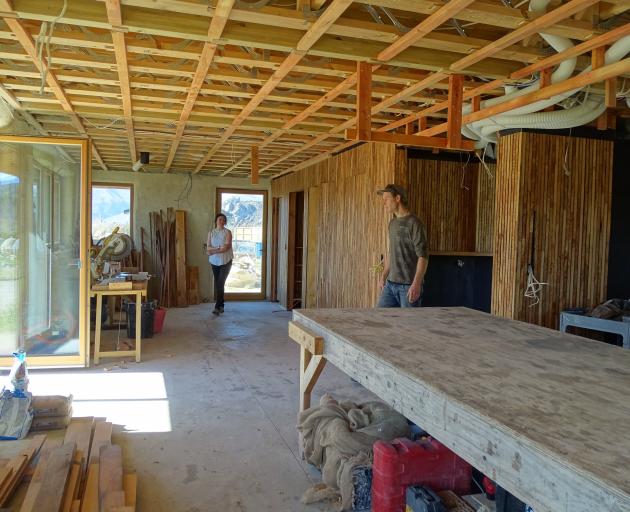 Jessica and Ben Eyers in the main room of their yet to be certified passive straw bale house.
The durability of straw bale buildings depends on the straw being kept dry throughout its lifetime - damp straw will rot. However, if it is kept dry there are no emissions, it is non-toxic and when it reaches the end of its life it will biodegrade. Some straw bale houses overseas have lasted for more than a century and the good news for New Zealand is they can absorb seismic activity.

"In fact, I think it is the most cost-effective for that level of technical performance and the most economic method of construction.''

The Eyers paid $10 a bale for their straw from a farm in Hawea Flat just 6km away. So far, their straw bale passive house has cost $400,000 to build, but Ben made the point the labour was free, the design costs were minimal and "I have been collecting native timber for years''.

There are different ways to build a straw bale house but whichever way is chosen, the straw must be kept dry during construction and then compressed to stop it settling.

Ben decided to do both at the same time.

"I built the entire tin roof structure on the ground, including the gib, an attic, a storage area that was all lined and insulated, all the electrics, wiring and the gib, and the PVC solar panels on the roof. I had put the trusses up using a stepladder so I didn't have to pay for scaffolding. In the morning we got all our mates to come and help stack the straw in between the posts and then in the afternoon we got a crane to lift the roof up and put it on top.

"It was great. We had Worksafe turn up afterwards because we had a two-storey building and no scaffolding and they were like, `how did you do that?'.'' 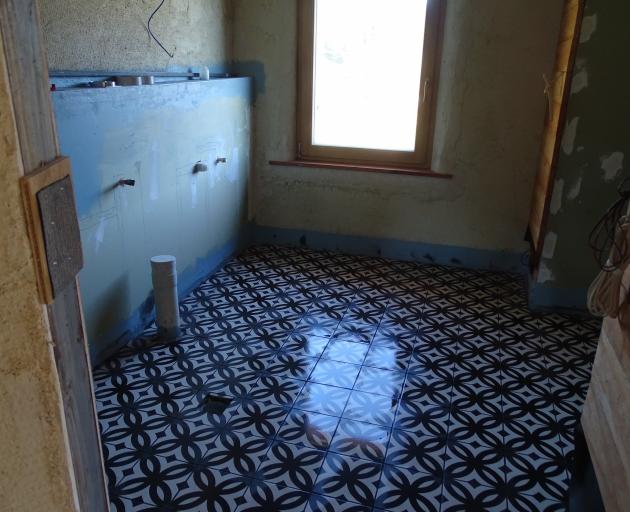 The bathroom will look like any other bathroom but the walls will be made of straw.
The next job was to waterproof the exterior. Ben sprayed pure clay directly on to the straw followed by a coat of lime-stabilised earth plaster, then stretched a geogrid over the plaster, filled it out to about 40mm, followed it with a lime coat and then a silicate paint over everything.

Jessica admits creating the passive house model and design for a straw bale passive was "tricky''.

"Usually in passive houses you use membranes and tapes to create the air-tight fabric but in this kind of straw bale passive house we are using the internal plaster, which is your finish, so we have to be really meticulous to make sure there are no little gaps to allow air through.''

"We can then use that data to prove durability of our systems,'' he says.

Ben says he is on track to finish the house by November, but that cannot come quickly enough for their sons Finn (8) and Louis (6) Eyers. Both boys describe conventional houses as "flat and boring'' and their new straw bale house as "bumpy'' and when it is finished they will have their own bedroom each for the first time.

Former Nasa engineer Jason Quinn will speak at the One Summit, in sessions on Building Better, in Wanaka on October 30 and Queenstown on October 31.