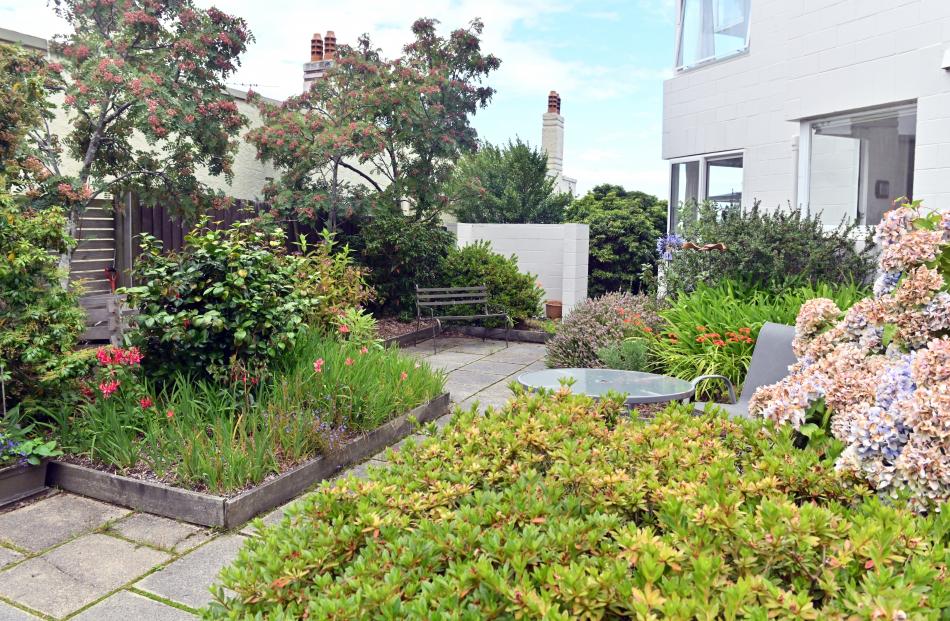 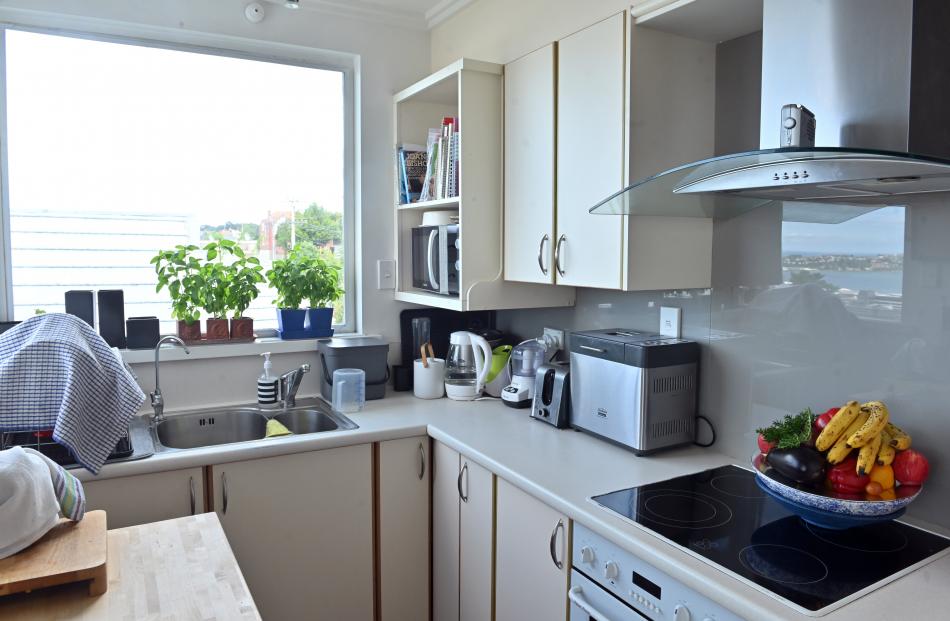 The compact kitchen has a compost collector bin, a bread maker, and a slow cooker that uses less electricity than an oven. A soda stream means the couple avoids buying plastic bottles. The extractor fan is "an essential in a small living space". 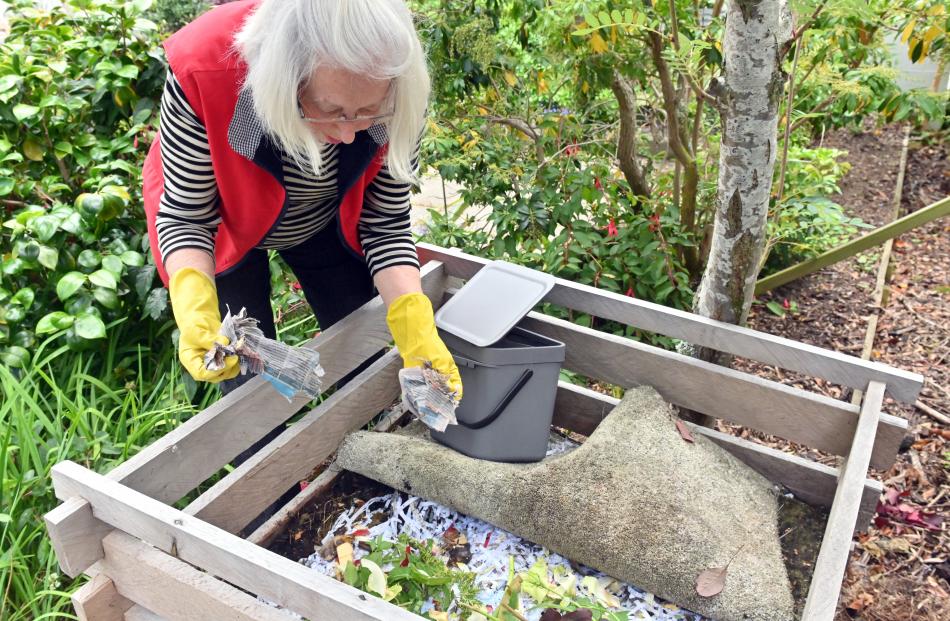 Mrs Angelo-Roxborough learned to make compost when she lived at Burkes Pass where there was no rubbish collection. 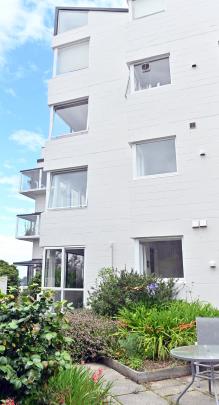 Cargill Court was designed by McCoy and Wixon in the 1970s. 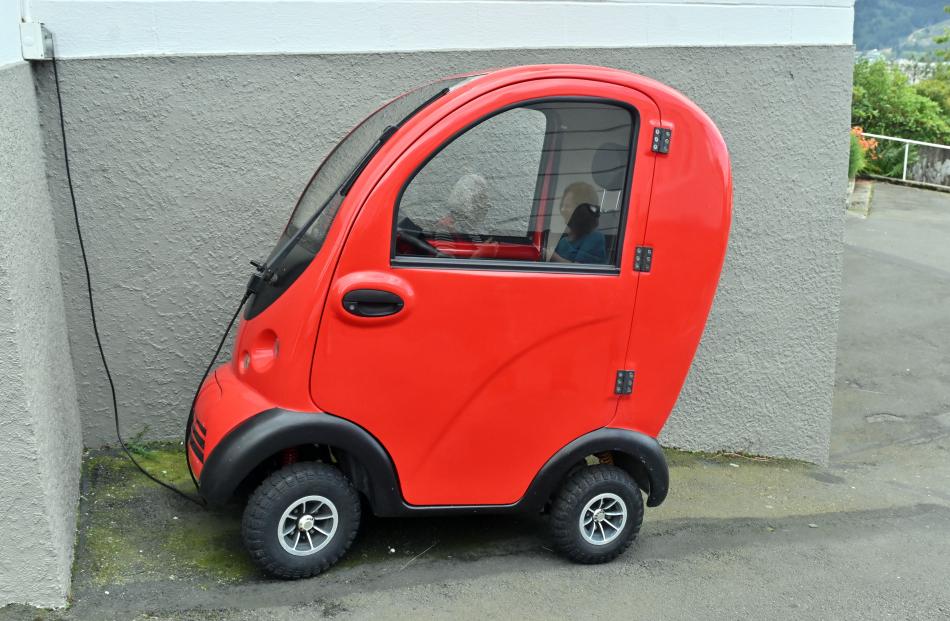 Dunedin is home to a small but growing number of apartments. Kim Dungey talks to a couple who own one of them and who enjoy living with less.

Maurie Angelo and Liz Angelo-Roxborough have discovered an upside to downsizing.

After nine years living in a Dunedin apartment, life has never been easier.

The retired couple no longer mow lawns or clean out guttering. Their City Rise location puts them close to shops, cafes, galleries, theatres, the university and the library and they enjoy having a vibrant mix of younger and older people, home owners and tenants, as neighbours. If they want green space, they only have to venture to the nearby town belt or to their communal garden. 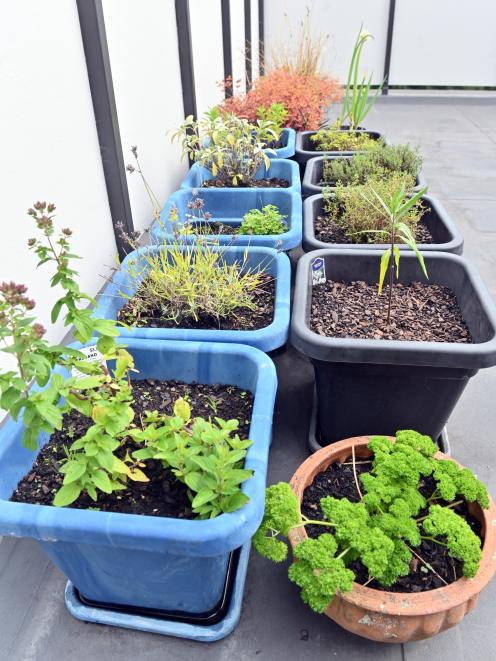 Parsley, oregano, sage, thyme and chives grow in pots on the roof-top balcony. Photos: Linda Robertson
For many, moving to a 100sq m apartment from a 300sq m home on 0.5ha of rural land would be a step too far. But the couple knew they could happily live in a smaller place. Deciding the money and effort they put into heating their 1876 concrete home would be better spent travelling each winter to somewhere they loved, they bought an apartment in rural Italy in the 1990s. Earlier, they lived full-time in a Christchurch Arts Centre apartment.

Mrs Angelo-Roxborough (75) said a lift and a view were both on their check list but having bus stops nearby was "No1" because at some point they would not be driving.

Her husband had mobility problems so they have an electric vehicle but she did not want to be "car centred".

"When you’re walking, you actually start thinking, planning, having ideas and looking around you."

Being close to medical care as they aged was important and they appreciated the security of having other people close by. Cleaning the two-bedroom unit took a minimum amount of time; maintenance and insurance of the building were handled by the body corporate and covered by its annual fee.

Mr Angelo (87) said he might get a little "cabin bound" if he did not get out every day or two but living in a smaller space did not worry him, particularly as the unit’s large windows looked out on an expanse of sea, sky and city.

His wife saw a "big gap"in Dunedin’s housing market for well-designed apartments for people of all ages — either new properties or repurposed heritage buildings. However, they needed to be managed by people who cared about the properties and the behaviour within them as many rentals with absentee landlords were being "trashed".

"In Dunedin, anti-social student parties drive families to live in the suburbs." 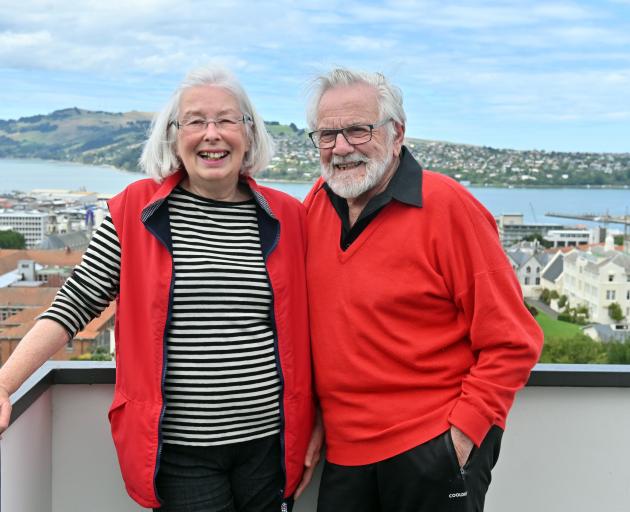 Maurie Angelo and Liz Angelo-Roxborough love the view from their City Rise apartment building.
Built in the mid-1970s, when many companies still had head offices in Dunedin, the Cargill Court Apartments in Arthur St initially served as "company accommodation".

While the architecturally-designed building was "ahead of its time", new apartment blocks could have eco-smart features such as solar power, triple glazing, grey water systems and plugs for electric vehicles, she said. Shared internal walls meant less heat loss. Views were important as they added a sense of space and they would ideally have shared social areas as well as good sized store rooms for items not needed on a daily basis.

The couple have a smaller second apartment, which they have used as Mr Angelo’s art studio and for visiting family and friends. But before moving in they gave away and sold many of their belongings, keeping only what they "loved, needed and used".

"I came to New Zealand [from Britain] with a backpack on my back so it’s a sense of freedom for me, not to have stuff ... " Mrs Angelo-Roxborough explained.

"There are also lots of things in a big house that you don’t need in a small place. For example, there are 13 homes here but we have only one tall ladder and one set of gardening equipment between us."

Having no rubbish collection at their previous house in the Mackenzie Country, they were mindful of what they brought into their home and how they would dispose of it. 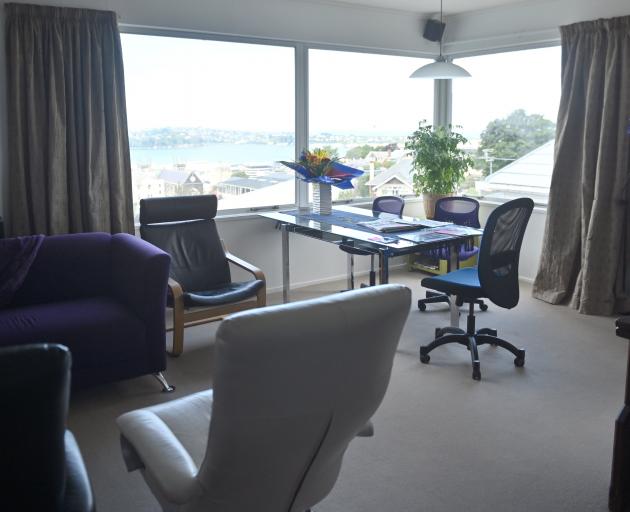 The 100sq m apartment is much smaller than their former home but the owners say the large windows and elevated views are a good compromise.
Even now, she did small, frequent shops, taking their groceries home on a bus, avoided plastic packaging as much as possible and rather than waste food, made uneaten food into other meals. She also thanked charity shops for "40 years of recycled treasures".

"It’s about not buying so much stuff."

There were some disadvantages to apartment living. Maintaining a lift was expensive, having pets, especially dogs, was not really practical and because they lived in close proximity, residents had to consider how their lifestyles affected their neighbours. However, they rarely heard any noise from other residents.

On the morning resilient visited, the sun was pouring through the large corner window by the dining table and Mr Angelo, a former educator and landscape architect, was preparing to drive his mobility scooter to Moana Pool.

A retired nurse specialist and educator, Mrs Angelo-Roxborough is now the Cargill Court property manager and has streamlined the recycling system. She has also restored the property’s gardens.

These include a courtyard garden complete with compost bins and vegetable plot, and a roof-top area where residents gathered late last year to watch fireworks and welcome in the new year.

The roof top has potted herbs, flowers, seating and a clothes line and Mrs Angelo-Roxborough plans to reinstate a worm farm. But the main attraction is arguably one of the best views in Dunedin.

Looking out over the city and harbour, Mr Angelo said he would prefer to be living in the mountains but when people got elderly or unwell, it was good to be close to services.

"Originally, we thought about getting a house but I’m glad we didn’t.

"I love open spaces and this really is great for that."