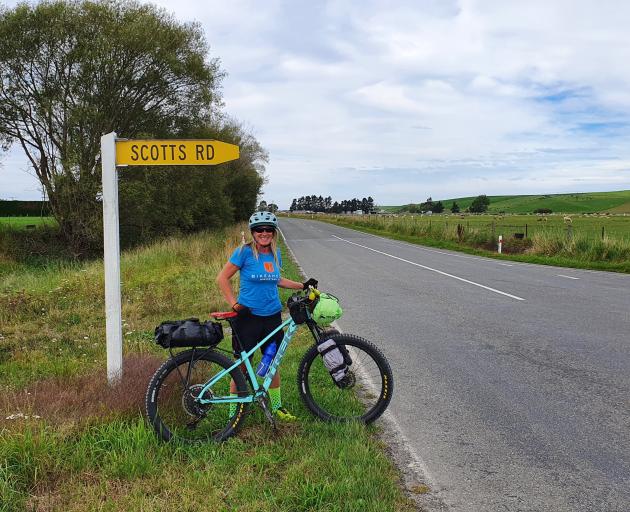 Always a moment for a picture with a sign bearing her name. Photos: Supplied
Gravel gut-busters, pleasant valleys and one weird wallaby. For her first bike-packing trip, Lisa Scott attempts the Ti Kouka Traverse, a 195km South Canterbury route climbing into the Hunters Hills.

Just so you know, bike-packing is not the new golf - despite the fact that New Zealand bike shops are being inundated by punters of a certain age fitting out their mountain bikes for this popular pastime. 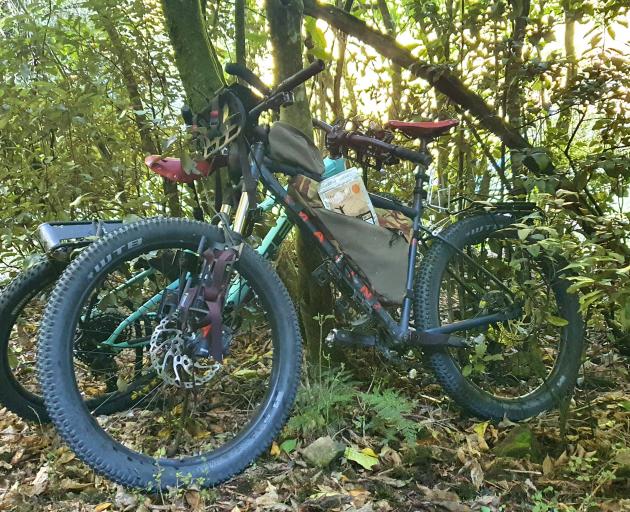 Back-country bike-packing requires well-equipped bikes.
Before setting off, we had our bikes outfitted by the very kind Matt Quirk at Good Rotations. Kit included: feedbags to fasten around your handlebars so you can munch while you ride, a cradle to strap a dry bag on to containing essentials like an EpiPen (good thing too, the number of bees that clonked into us), a rain jacket and Sweet Cheeks Butt Butter to prevent chaffing, because bike-packing is a leisure activity that gives you sores and boils. Two cages were mounted to the bike forks - mine carried the tent on one side, roll mat and cooking pots on the other.

Like all newbies, we took too much stuff. My bike hit around the 25kg mark, which you only notice if you fall over in a dry riverbed and it lands on you because this is also your first time wearing SPD (cycling) shoes and you haven’t quite mastered unclipping. 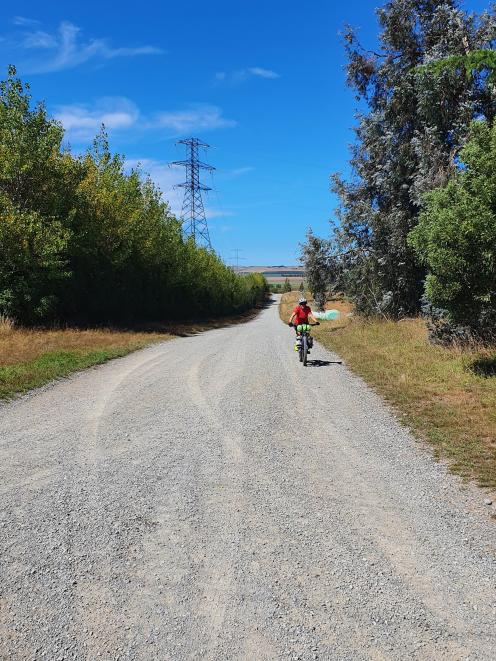 Lisa Scott, all packed up with 25kg of provisions, as she heads off on her big adventure.

Pareora to Mt Nimrod reserve, and the only way was up.
The gravelled steeps of Backline Rd had us almost puking at one point. The last 15km of 50 were hellish: climbing and climbing and pleading, "Please let this be the top". It never was. We were so exhausted, dribbling into the campground at Mt Nimrod, I thought the large grey wallaby standing on the grass staunching us out was a hallucination.

Setting up our night’s accommodation, I thought someone had shrunk camping since I last did it. Everything packs down to next to nothing; I even had a teeny blow-up pillow. The tent was essentially a mesh bag covered by a thin green tarp, which provided plenty of protection from the sudden wind and rain, but not the noise of the wallaby crashing around outside. What did he want? Huffs, moans and grumbles sounded close by, but sleep overtook us before we could worry about it. Waking to a bellbird dawn chorus, a pair of sunglasses were missing. The wallaby, of course.

We had bitten off more than we could chew by aiming to cover 195km in three days - our fitness just wasn’t up to it. However, the great thing about bike-packing is that you ride your own ride, so we tailored the route to suit. As a consequence of which, may I present the Team Lames’ (Lisa and James’) 143km and a bit. 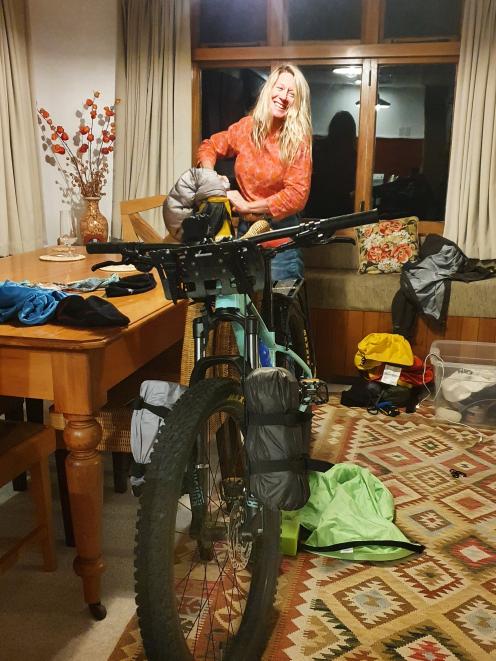 Packing is a bit of an art when you have to carry everything you need.

Mt Nimrod reserve to Pleasant Point, was an absolute cruise in comparison, the lack of ultra-steep hills making us almost evangelical in praise of fields of sunflowers, spooling back-country roads and the biggest of blue skies.

We made it to Cave by lunchtime. There was not a scrap of food to be had, but a friendly publican (who must hear "there’s no Wi-Fi?!" said incredulously about 25 times a day) provided us with a cold glass of beer that went down a treat.

Cows bellowed in the distance as we carried on to Pleasant Point - a compelling advertisement for small-town life. A cricket match was being played on the domain. Spectators sitting under the old oak trees whose branches shaded the campground, too.

We stretched out on the grass and watched the sun sink as three busy little boys armed with shovel, fork and hoe industriously built a BMX jump on the edge of the domain - until their mum called them in and they blithely abandoned Dad’s tools and went home.

The freedom to go off under your own steam and have a bit of an explore appeals to the Kiwi psyche; and of course, there’s the gear. Kiwis love gear. Plus, bike-packing is sort of a pedalling Mad Max. Lone survivor, pitted against the hills, only his roll mat between him and the elements.

Bike-packing burns around 5000-8000 calories a day, so eating for energy is super important. We strapped bunches of bananas to our handlebars, filled our feedbags with boiled eggs and a mix of cashews and dried apricots, dined on Local Dehy’s excellent vegan jambalaya and easily polished off the gargantuan Pleasant Burger from the Pleasant Point Hotel, a tower of double beef patties, fried egg, bacon and cheese.

Our third day, Pleasant Point to Timaru, we plotted a route avoiding the main stage highway. Making our way through Timaru’s industrial area we passed the headquarters of the Devils Henchmen, a palisaded fortress that looked like it could withstand a zombie apocalypse. Winding up through the suburbs, suddenly there was the sea. Lifting our bikes (now, as we were weary, weighing as much as Jumbo the elephant) over the stile, we rode the coastal path to Caroline Bay - who knew Timaru had such a fantastic shoreline? - for ice creams eaten sitting on the grass beside the model train.

My knees felt like two glass vases that had been bashed with a hammer, the pieces loosely collected in plastic shopping bags. 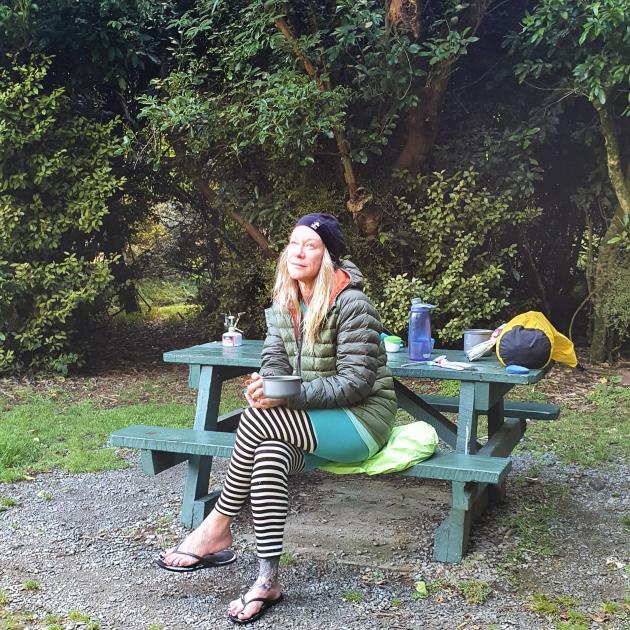 Making it to the end of each day is a triumph.
Rain threatened, black on the horizon, but the weather held its breath. We had a little trouble rejoining the path, as some of it had been eaten by coastal erosion but in the finding we discovered a beautiful old velodrome, woven and wooden-planked and open to the sky like a wicker trug.

Pushing our bikes up the sandhill we refound and followed the path, which now ran beside an estuary populated with geese, swans and shags, each species maintaining a discreet distance, past rowers sculling on the river, pulling backwards as we plodded forward on the final leg into the rising southerly.

With nothing left in the tank, I was reduced to drafting my larger companion, weakly making offensive hand gestures to display my enjoyment level.

Nothing less than total euphoria was experienced at Pareora and the finish. As we laid our bikes down, the heavens opened. Clearly in the grip of insanity, we were already talking about the next trip and where it might take us.