Confessions of a freedom camper

Wanting to stay in the wilderness and get away from it all, Sam Shead was stumped by freedom camping laws. Photo: Supplied via NZ Herald

We risked it in our camper van just outside Wanaka. We'd found a patch of grass that we thought we might be able to freedom camp on, just off a road by Glendhu Bay, where Silicon Valley billionaire Peter Thiel owns a 193ha farm.

"I'm scared Sam," my girlfriend, Ally, tells me before she attempts to drift off to sleep in the back of the converted Ford Transit we're renting. She's worried someone is going to come knocking on our door and give us a $200 fine we can't afford for breaking New Zealand's freedom camping laws. 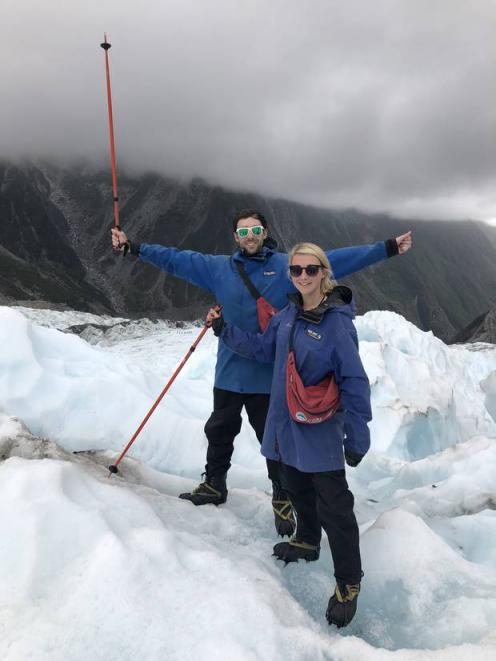 Sam Shead and his girlfriend. Photo: Supplied via NZ Herald
As a Brit who has spent close to a month travelling around this beautiful country in a self-contained camper, I have to say I found the whole experience to be rather stressful and unnecessarily expensive.

My girlfriend and I are respectful people who care deeply for the environment. As are, I suspect, the overwhelming majority of campers who travel around New Zealand. We don't want to poo in your bushes, urinate in your rivers, or leave litter on your roads. We want to leave places as we find them. We also want to stay in the wilderness and get away from it all.

Today, campers travelling around the South Island typically have to pay to stay with hordes of others at designated Department of Conservation (Doc) campsites or other official campsites.

London, which we've recently left, is a busy city full of people and cars. But, it turns out, so are many of New Zealand's campsites.

What's worse is many of the campsites are also a rip-off. We paid more than $60 in some towns. When you're trying to travel on a backpacker budget and you're already paying more than $150 a day to hire a basic, self-contained camper that allows you to stay practically anywhere, these camping fees are annoying.

In Dunedin, one of the more accommodating cities for freedom campers, we managed to park overnight for free in a carpark outside The Kensington pub. Photo: Stephen Jaquiery

The campsites we paid for often had slightly better facilities than the ones on board our camper but we could have lived without them, and we often did. There were several occasions where we forked out for an expensive campsite and didn't use anything there as we were perfectly happy in our van. Occasionally we got lucky and found a free campsite just outside a town, but many of New Zealand's most popular tourist spots don't have free campsites.

In some parts of the country, we found we could freedom camp outside campsites — on roads and in other public areas — but it wasn't always easy to tell when it was allowed and the rules change everywhere you go.

When we inquired about freedom camping in Tekapo, a rather rude lady working in the iSite told us it was strictly forbidden and that we'd have to leave if we didn't want to pay to stay in the local campsites. We got the impression that lots of Kiwis hate freedom campers. We left Tekapo and stayed at a Doc campsite at Lake Alexandrina, where we paid $10 each (and didn't use any facilities).

When we inquired about freedom camping in Tekapo, a rather rude lady working in the iSite told us it was strictly forbidden. Photo from Wikimedia Commons.

As for the rest of the trip, we ran the gauntlet in Kaikoura and slept on the side of the road in a cul-de-sac just outside town but we lay in bed nervous that we were going to be woken up by a local and ordered to move somewhere else. In Wellington, we paid $29 to sleep in a noisy carpark called Cuba Street Motorhome Park, and we had to leave by 8am the next morning. In Dunedin, one of the more accommodating cities for freedom campers, we managed to park overnight for free in a carpark outside The Kensington pub. In places such as Queenstown, we had no choice but to stay in Top 10 Holiday Parks, where we paid more than $60.

We must have spent hundreds of dollars to stay in campsites that, in our heads, we didn't need to stay at. When you're already spending extortionate amounts on experiences, the trip ends up costing a fortune.

Finding peace and solitude in the New Zealand countryside turned out to be harder than we'd anticipated because of the country's ridiculous camping laws.

Something needs to change.

Your experience reflects our own and we are a responsible retired NZ couple, and I agree with everything you said. I well recall the unhelpful, accusing change in tone when asking about places we could free camp. We were scum! Its even more difficult when you own a dog, very few camps take you so it all becomes too hard. Easier to stay at home and save your money. People think freedom campers don't spend money, not true.

I am not sure what to make of this. This is a British person objecting to not being allowed to pitch camp where they like. Presumably they expect laws to be different to those at home when they go on holiday.

I'm a Brit myself, but not for a while. Back in the day one would have a 'life expectancy' of five minutes if you tried to pitch camp on the village green or in some leafy back lane in Little Snodderinton. In the Lake District or similar location it would be more like five seconds. Being a New Zealand tourist would not help in negotiations. My understanding is that things have not changed.

However, I hear them about the campsites. We camped in one last month. It cost us well over a hundred dollars for a single small unpowered site on which we pitched three small tents. Everything, including the loos, was under pressure and had to be accessed by PIN, which meant that anything you were carrying, including food, had to be placed on the floor.

There was no indoor dining room, the place was sardine like, covered in threatening notices and generally exuded a hungry attitude of 'Give us ya money and now piss off' - Not a good advert for the country at all.

Is an English Village Green not a 'Common', ie is it private property?

With recent analysis showing freedom campers spend twice as much money as regular tourists we need to stop giving them such a hard time. Most people travelling the world respect it, that's why they want to travel. People by nature want to do what is right so we should stump up for proper facilities for them.

Having just returned from the UK, I am amazed to read of these people's dismay at having to pay $10 each to stay at a campsite. The article does not reveal whether or not they are from London, or if they just visited, but when you consider the cost of parking in the UK and London in particular, you have to wonder where these people are coming from?. Paid $150 a day to hire a camper van and hold the rest of us up on the roads?- ah diddums. Why would you expect the rest of us to care?- you should stay in a motel and hire a car or fly like the rest of us. My heart bleeds for the poor dabs that use the roads that are provided for tourists (eg Nugget Point sealed road, so tourists can drive their hired vehicles on it) but from which the rest of us ratepayers (who paid for it) derive no benefit and then they have the neck to complain about paying to use a campsite. There are plenty of cheap package deals around Europe that might be more fitting of their "backpacker budget"- perhaps they might prefer to go to Benidorm next time- bless!

Have you joined the throng of the rude? There's nothing bludgy about these young Brits.