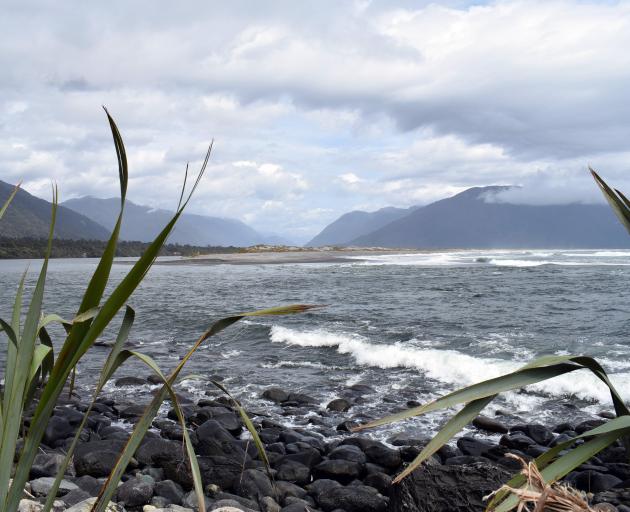 The treacherous mouth of the Hollyford River. PHOTOS: KERRIE WATERWORTH
Fiordland attracts more than 1.2 million visitors each year and has been described as the walking and sight-seeing capital of the world. The majority come to see Milford Sound or hike the Kepler, Milford and/or Routeburn Tracks. But there is another, less well-known track in New Zealand’s Fiordland National Park that is an absolute gem. Kerrie Waterworth discovers the Hollyford Track.

It was August in Wanaka, snow was on mountains, frost was on the ground and we had accumulated a winter layer of fat - it was time to book a physically active summer holiday.

My neighbours suggested the Ngai Tahu Tourism three-day guided Hollyford Track Wilderness Experience. They had walked it the previous summer.

Intrigued, we booked for the end of November, which turned out to be pre-peak season and entitled my husband to a gold card discount - even better!

Six weeks before departure our information pack arrived, including a gentle reminder that a reasonable level of fitness "would ensure we would get the most from the experience". 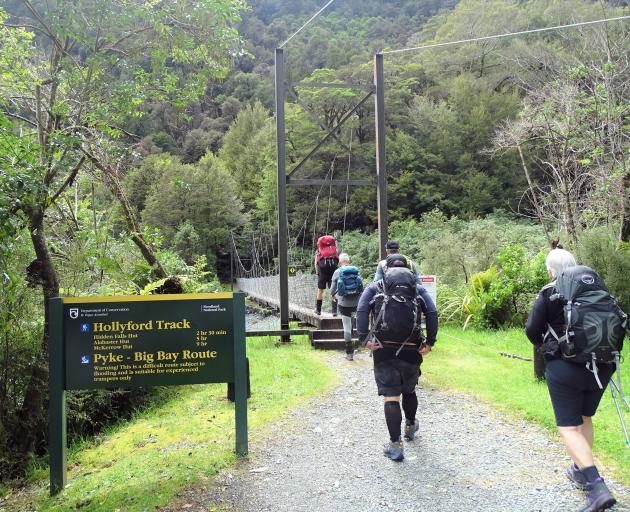 The treacherous mouth of the Hollyford River. PHOTOS: KERRIE WATERWORTH
Unfortunately, the complexities of daily life took over and we managed only a few long walks before the day arrived when we had to drive to Te Anau for a pre-departure briefing and meet others in our walking group.

The good news was the weather forecast.

Our lead guide, Becs, had guided seven Hollyford Track walks this season and she told us it had rained on both days one and day two every time.

The next morning, at 8.30, we rendezvoused at the Te Anau Distinction Hotel to meet our other guide, Robyn, and the other four members of our 12-person group who had started their journey in Queenstown at 6.30am.

We were a mixed bunch but all Kiwis, ranging in age from 30-something to 70-something, but most were in their 50s and 60s.

We climbed aboard our bus for the 85km drive, with commentary from Becs, along the Milford Rd through the Eglinton Valley to Marions Corner and Camp, the site of the Milford Road construction community in the 1930s.

We turned right on to the Hollyford Valley Rd and headed down to Gunns Camp. We were to hear much about Davey Gunn during the next three days, a legendary back-country cattleman who ran Herefords further down the valley and who, in 1951, had bought the remaining Public Works Department camp huts to use as a base for his farming and tourism ventures. 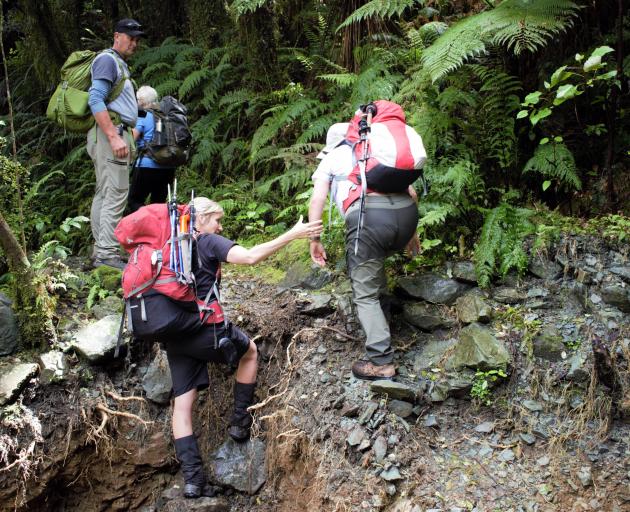 The treacherous mouth of the Hollyford River. PHOTOS: KERRIE WATERWORTH
We were given a few minutes to look around the Gunn museum, buy a souvenir or use the last flush toilet until tonight - difficult choice.

Then it was a quick 10-minute drive to the end of the road and the start of the Hollyford Track.

Today we had to carry all our belongings and hike 19.5km, the longest daily distance. Starting the walk at 11am wasn’t ideal but for those fitter and faster it was no big deal to hike the track which wound its way along the valley through undulating native beech forest and past tumbling waterfalls. There were one or two tricky places where the guides helped us and regular stops where Becs or Robyn displayed their impressive botanical knowledge and told fascinating stories about the Maori inhabitants and traders and the early pioneers who between them had forged trails through this dramatic landscape and created the Hollyford track over hundreds of years.

It was a glorious day, sunlight dappled forest ferns that sparkled with dew. We stopped for our packed lunch on the gravel banks of the Hollyford River with idyllic views of the valley and, across the river, the soaring summits of Mt Tutoko (2746m), the highest peak in Fiordland named after Chief Tutoko, and Mt Madeline (2537m).

The longest swing bridge in Fiordland.
We were still only halfway, so it was back on the track and a quick side trip to Hidden Falls, where the thundering roar and the spray hit us before we saw the 31m-high waterfall. Then it was a slow climb to the highest point of the track. Making it to the summit of the 168m Little Homer saddle didn’t seem such an achievement when surrounded by 2000m or more peaks of the Darran Mountains.

Following the Hollyford river, it was now downhill to Pyke Lodge. It had been a long day but the warm welcome from our hosts, a hot shower, sumptuous pre-dinner antipasto platter followed by roast venison and a cosy bed with fresh sheets and hot water bottle made it all worthwhile.

Day two started with a short side trip to Lake Alabaster, a walk across Fiordland’s longest swing bridge and a stop beside the memorial to Davey Gunn. Then it was back to the lodge for a muffin before a jet-boat ride down the Hollyford River and up Lake McKerrow - a great way to experience this wild and remote country. We were hiking a total of 15km today but carrying less, as we’d swapped our big packs for smaller day packs. From now on our big packs would be transported for us.

On the far northwestern shore of Lake McKerrow we stopped at the abandoned settlement of Jamestown, an attempt to establish a west coast port to service the Otago goldfields in the 1870s. The settlement’s failure can be attributed primarily to the isolation and weather, and the notorious river entrance where many supply ships foundered or refused to enter in rough conditions.

Hollyford’s idyllic views captivate.
Our jet-boat took us further along the lake and we disembarked into an ancient podocarp forest of thousand-year old giants such as native rimu, totara and kahikatea.

For the first time we heard varied birdcalls, including the song of the previously locally extinct South Island robin (kakaruai) which the Hollyford Conservation Trust translocated from Chalky Island in Fiordland to the lower Hollyford Valley last year.

We made our way through low scrub and patches of grass, remnants of paddocks created by the settlers. We were approaching Martins Bay and we could hear and smell the sea. After hiking along the Hollyford to the river mouth, we came to a bay of boulders where we saw a pair of Fiordland crested penguins returning through the thunderous surf to feed their young. We were fortunate to see seven of these rare penguins, one preening itself, unconcerned about our presence. Further on at Long Reef point a colony of native fur seals lounged on the rocks.

A return walk took us to our waiting jet-boat and a short ride to Martins Bay Lodge, where hot showers, a gourmet dinner of poached salmon and a roaring fire were waiting for us.

We donned our wet weather gear and after a short jet-boat ride across the river disembarked on to one of most important dune systems in the South Island. Becs and Robyn guided us through to middens and evidence of Maori occupation and into the forest, where almost nothing remained of a settler homestead. It was almost impossible to imagine how pioneers Daniel and Margaret McKenzie managed to feed, clothe and raise a family in such an extreme and isolated environment.

As we made our way back along the beach, with lowering skies and driving rain, we sensed just how remote and wild this place is and our respect for all those who made a living here grew. Back at the lodge, we had a last lunch together before the first group departed by helicopter to Milford Sound. The 15-minute chopper ride hugged the rugged and spectacular coastline, but it was the myriad waterfalls flowing down the sheer mountains into the sound that took our breath away.

Back in Te Anau, we all agreed the Ngai Tahu Tourism Hollyford Track wilderness experience was like no other guided walk we had ever done.

Discovering Hollyford is far more than just a great walk. Its an immersive experience in New Zealand’s spectacular Fiordland National park with its rugged grandeur, amazing diversity of plants and birds and unique history.