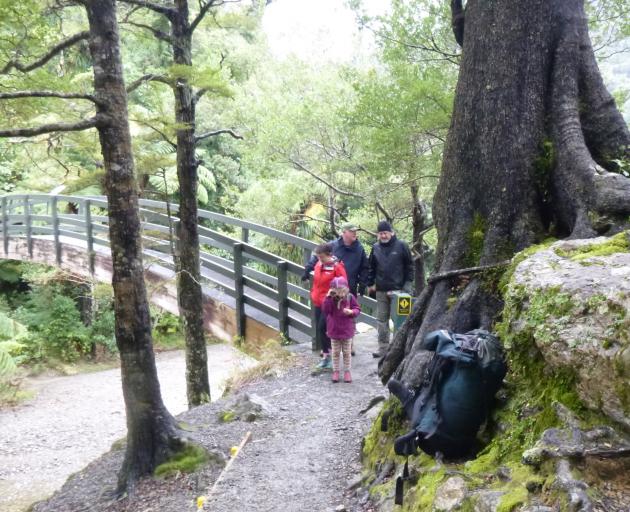 The gracefully arching Turere Bridge. PHOTO: CLARE FRASER
Although there is undoubtedly a lot of suffering going on at the moment, these times are bringing bonuses. One is the fact that restricted travel leaves us appreciating the beauty of our backyard.  And boy is Wellington’s backyard beautiful, writes Clare Fraser.

Where else in the world can you drive an hour or so from a nation’s capital and find yourself in old forest so accessible that three generations can do a mini tramp to a hired hut?

Like lots of Dunedinites, members of my whanau have shifted to Wellington and recently we had a get-together in a quirkily Kiwi fashion — we went on an overnight tramp.

Previously our catch-ups had revolved around helping care for the next generation but they’re independent now and we needed a new practice after the recent death of our patriarch. So one of my brothers had a brainwave.

Opposite the harbour from Wellington is the Remutaka Forest Park. You might know of it as Rimutaka but that name has always been wrong so in 2016 was corrected as part of Rangitane iwi’s treaty settlement. "Remu" means "to gaze about" and "taka" means "to sit down". Now the name recalls Haunui-a-Nanaia’s historic journey across the southern North Island.

Huts are available for hire, only a few hours from the most popular entrance to the park at Catchpool Valley, south of Wainuiomata. We hired Haurangi Hut and rebranded it as going to "Uncle Steve’s Hired Hut’.

Drizzle and wind in Wellington could have put us all off but the walk to the hut is protected by mountain ranges and was perfectly sheltered. The bush dripped but warmth radiated from our bodies and surprisingly, our clothes stayed dry.

And talk about amazing bush. After some disillusioning gorse, quickly you’re passing by exotic-looking nikau palms with a West Coast feel. The forest is distinctly northern, with kawakawa and rewarewa, even a thick, lush grove of ground-dwelling kiekie. There’s lots of old red beech and some very mature podocarps that seem centuries old.

The track starts off as footpath standard, makes an undulating climb and towards the end throws a few mud patches at you. There’s a tame little river crossing to add to the adventure.

Impressive swingbridges are fun for children and scenic for adults. The gracefully arching Turere Bridge, bordering a gaping great gorge and surrounded by delicate red beech, evokes a Japanese vibe. From here you can access the wide river flat of the Orongorongo River to fill up your water bottle or to just play. Try chucking down empties for people to throw back up once full.

At this point you enter the Turere catchment kiwi zone. Remutaka Conservation Trust is working with partners to restore the park’s kiwi population, starting with a stoat-trapping network in 2003. The first six kiwi were released into the park in 2006 and as at August 2020, Remutaka Forest Park has an estimated 150+ kiwi from a total founder population of 24.

Following the river’s edge now, there can be the occasional bizarre glimpse through the trees of a four-wheel-drive booting it up the river bed. Just like with jet-boats, the etiquette is a friendly wave. On the other side of the river enticing huts peep through the bush and before you know it, you’re at Haurangi Hut.

It cost $100 and we had it to ourselves. Luxury. And to top off the luxury, the previous occupant had set the fire ready, in true tramping tradition. Further luxury is that on such a short tramp you can carry in fresh food and the hut has all the cooking and crockery you need. Platform bunks in two storeys sleep 10 people, so bringing ear plugs for all is a lightweight gift that’s a bit of a crowd pleaser.

Funnily enough, the fact there is no cellphone coverage on the track is a bit of a luxury too. It leaves plenty of time for intergenerational games such as cards or teaching the young ones how to quickly pass your finger through a candle flame.

Another activity was lighting a candle using a near-50-year-old promotional book of matches from our late father’s car yard, VIP Motors. Do they still make those things? His 13-year-old grandson had to be shown how to use it. Quietly special, anyway.

At three hours, the walk is ideal for a breadth of ages, with the youngest two in our group being 9. Children get the experience of overviewing the route mapped out on a clear entrance sign, they get to carry their own wee pack, taste having to push themselves a bit and have the “perspective-expanding” experience of a sleep in a bush hut with no electricity and an outside toilet. The hut has plenty of room for physical play.

Having three generations under one roof was so lovely we’re talking about Matiu/Somes Island in the middle of Wellington harbour next. Without the bush walk in, the second grandmother can come this time too.