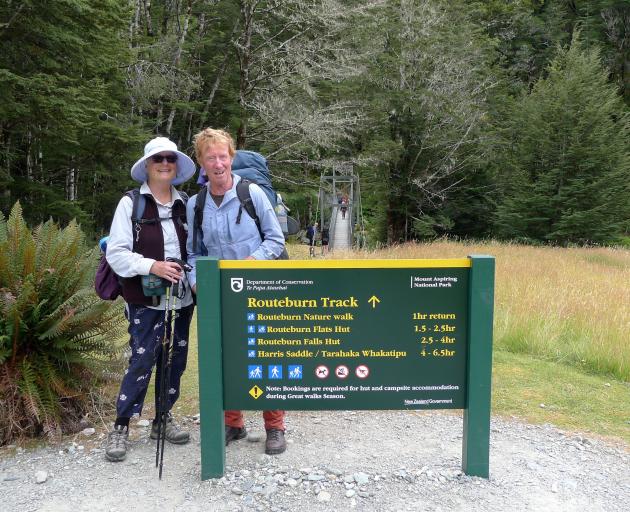 Geoff Chapple and his wife Miriam depart for the Divide on the Routeburn Track. PHOTOS: GEOFF CHAPPLE
With just two weeks  to go before Great Walks season begins, Geoff Chapple extols the virtues of the Routeburn Track.
The Routeburn is one of New Zealand's most popular tracks, but my wife Miriam and I had never walked it. We figured also, in these years of trouble, there'd be mainly Kiwi trampers on the way, and so in late February we took the shuttle from Queenstown to the Glenorchy trailhead, and set out for Routeburn Flats Hut.

It struck me soon after we started that the Routeburn was such stuff as dreams are also made of. Leering barriers - near-vertical towers of black rock - that blocked our passage, yet there was a way opened up, and it was the gorge, its long sequence of deep pools an impossibly pure aquamarine. Otherworldly beauty, but nagging oddities too - the prim toilet poised above those pools, and trees that grew where no tree should, their feet deep in the tumbled grey debris of rockslides. And finally the river flats that glowed gold beyond the bars of a dark forest. What were river flats doing up here at 600 metres elevation anyway? 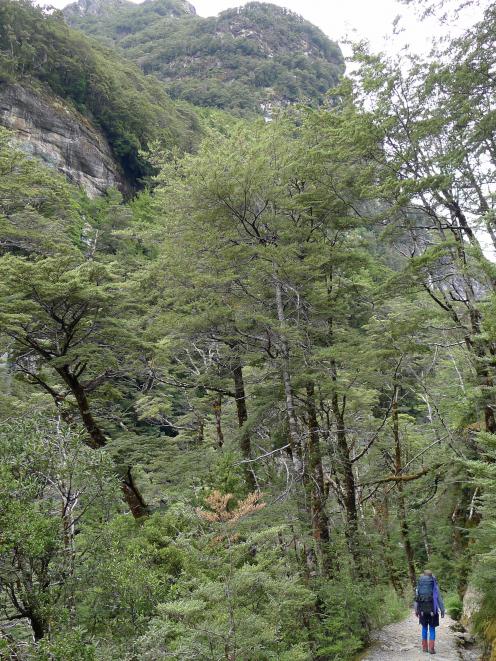 The tree that grew where no tree should.
And then, I can't promise anyone that it'll happen to them, but from arrival that first afternoon right through until next morning, the hut was ours alone. Ours to clean away the dozen legs-in-the-air dead blowflies that lay on the interior sill. Dead until swept into the dustpan, but who rose again, quick as a wink and furious at the interruption to their - I'm guessing here, sunbathing or sleep - and went back to assailing the windows.

From the ribbonwood tree beyond the window, Aotearoa's smallest bird dropped down to alight on a post and stare through the glass. Staring upwards at us, the country's tiniest beak tilted to behold - whatever. Tiny eyes either side, gleaming black. The rifleman, perfect as a pin. Beyond the bird stood the high ice fields of the peak named for the Greek god of sleep, Somnus, a gable of dark rock supporting its great snowy roof. The moon rose that night between Somnus and Momus, and in the morning, as Celeste, the Doc hut warden, came calling and wrote out the weather forecast I felt a twinge of that over-the-horizon anxiety common to dream: 120kmh gusts up on the tops.

We climbed through forest next morning to Falls Hut, lazing about on the tree line to watch the Routeburn disgorge over a chasm. Tanned figures bathed in the pools below as the small river collected itself and went coursing on downhill. But the wind stayed high, and at the Doc briefing that night, hut warden Tom asked the 30-odd Harris Saddle trampers to taihoa (hold on) until he got the new weather report. He lifted the curfew about 10am the next day, and we set off into the rain, topping out above the hut into a hanging valley. I looked back at Miriam. She'd donned her $2 Shop plastic poncho. She rose on to the new elevation as a bright blue bird, all rustle and snap in the wind. 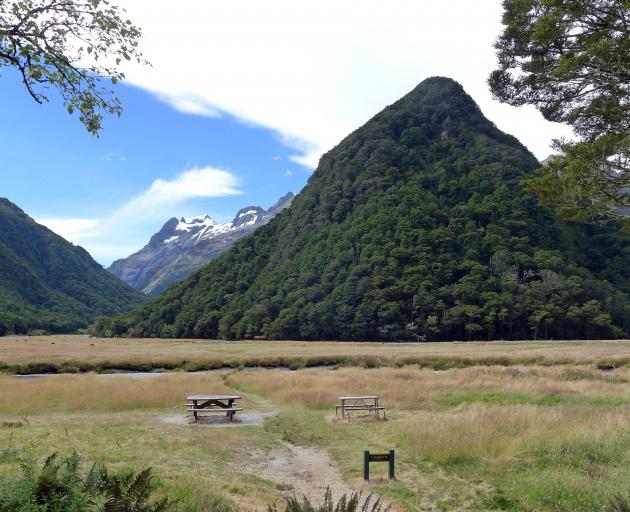 Routeburn Flats.
We relaxed into the tramp then, through a valley where huge blocks of stone had rolled out of the steep walls either side, and we climbed in small degrees until the track steepened towards Lake Harris.

We stopped for a drink of water, and Miriam gazed around. She took a swig and gestured at the surrounding wilderness. ‘‘Look! Like a bridal path.

‘‘Gentians, mountain daisies, harebells, gaultheria,’’ said my wife. I looked. The track was bestrewn with old moraine rock. It gleamed ahead with wild and romantic bespoke floral arrangements either side, and vanished into mist.

We sidled then above a 100-metre drop down to Lake Harris, climbed to the saddle, lunched at the shelter there, then stepped out on to the Hollyford Valley's long eastern face.

Wind and rain tugged at us, as we followed along a narrow path, and paused, wondering before a sourceless thrumming in the air, as of heavy traffic. Around the next knoll gouts of white water descended by leaps and bounds, gushed beneath the iron fretwork of the trail bridge, then poured away through the mist and over the vertical drops below.

At this height, the U-shaped valley is three kilometres wide. In zero weather, still we'd sometimes glimpse its far wall. Glaciers off the mile-high Darran Mountains once converged along this great thoroughfare, to trundle with their cargo of splintered rock to the sea, and you could still sense the cavernous presence of that long-ago ice-age cleanout.

You could sense also its cleansing effect.

The Routeburn Track.
Paul Theroux, travel writer, walked this same vertiginous face in 1992, a troubled man. As he recounts in his 1992 book The Happy Isles of Oceania, his marriage was on the rocks, and the London publishers he'd recently visited were more pettily concerned with pecking order and parties than proofing and literature. Whatever loose relationship our vocabularies have with human emotion, the Routeburn has the knack of delivering the right word for the moment. For Paul, who suddenly raised his face to the heavens, it was a single divesting shout - ‘‘Bullshit!’’ A natural misanthrope, he loved this track. For me, on a wind-assisted roll down this same long stretch, the word was joy.

For a very few though - terror and regret. The trail is administered by Doc to reduce risk, but it climbs to 1300 metres, and for reasons that are usually clear in retrospect, some tramps don't end well. Doc discourages winter passage when the track is closed to all but parties with proven alpine skills. In July 2016, a Czech tramper ignored Doc advice, lost the track in heavy snow and succumbed to hypothermia along this same stretch. His companion pushed ahead for two more days before she reached Lake Mackenzie and forced open the warden's hut, remaining stranded there for a month. 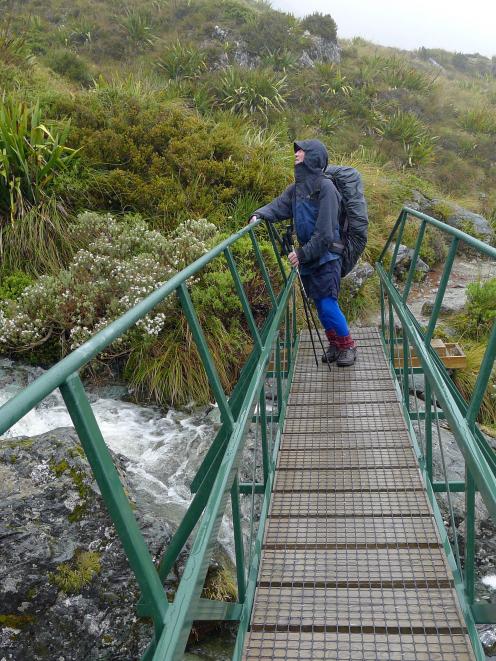 A bridge on the way to Lake Mackenzie.
We went down that long final zig-zag ourselves on uneven and often slippery slab surfaces. Even on a good day it'd be a wearing last hour, with Lake Mackenzie Hut always visible as a stubbornly small matchbox in the distance. Yet even here the dream kept throwing up its random marvels - the trees as we approached the hut so thick with moss they seemed a pneumatic bouncy forest. We arrived wet and tired, but the $2 Shop poncho had proved itself. Miriam had tested it as an overlay to her new parka, with merino under that. She was merely damp. Before leaving Auckland I'd waxed an old parka, and also had warm layers beneath, but was sodden to the skin.

The firebox inside was surrounded by wet boots, a common enough sight, except for the Buddhist monk drying his saffron robe on that same flat firebox top, mindfully turning it against the scorching heat, folding it into a neat rectangle as each section dried, and topping it off with a carefully arranged pair of gloves. Outside, the kaka tore lichen from the trees above, and cast great lumps at our feet.

And then, on the final day's tramp out to the Milford-Te Anau Road, we came across a kea gang sitting above another trail sunny dunny, willing us to leave the door open. We latched the door closed upon exit, and the gang whirled away, then as we came on down the track, settled above us on three dead trunks. It was a natural sunlit dais for prizewinners one, two and three. They puffed out bright green chests, scolded us as spoilsports, then took flight, their piercing cries measuring out the big blunt Fiordland spaces.

‘‘And look,’’ said Miriam, after a long bus ride via Te Anau back to Queenstown and the familiar crags of the Remarkables, ‘‘the keas have been ripping the tops off those mountains’’. We both knew what we’d come through, and were willing the dream to continue. 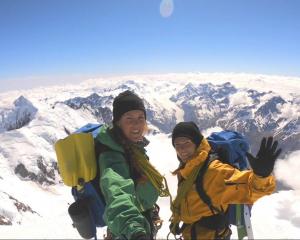 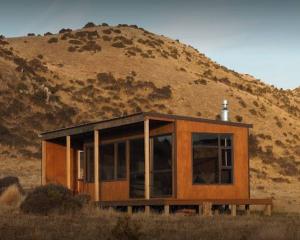