Cycling from the west coast of the United States to the east coast of Canada was no easy ride.

We set off from the pretty coastal town of Astoria, Oregon, on June 1. My husband Kel and I had cycled for a week, two at the most, in Europe, however this was our first attempt at crossing a continent. Or cycling for more than two weeks!

Our Hungarian-made Gepida touring bicycles each carried two front pannier bags, two back pannier bags, a bar-bag and rack-pack. Included in there were our tent, camping stove, food, tools, clothes and water. When we weighed in at the Adventure Cycling Association's headquarters in Montana, Kel's bike and baggage was a hefty 56kg and mine, 45kg. 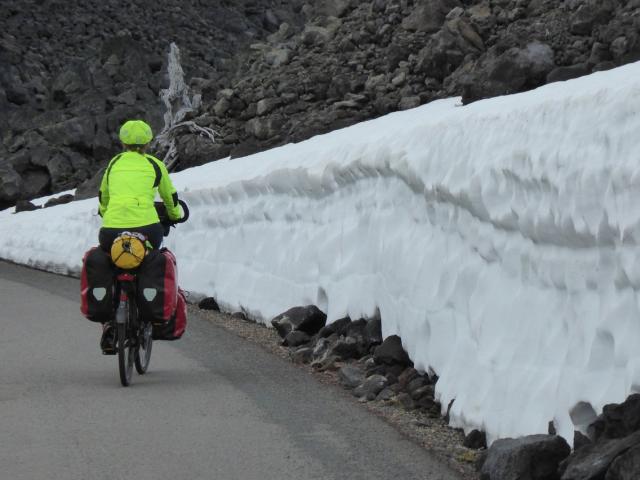 Sharon Fowler cycles the McKenzie Pass in Oregon. PHOTO: KEL FOWLER
Oregon was the first state we traversed and it was beautiful. Forested coastal hills and rhododendrons edging the Pacific Ocean made way for mountains, wide rivers and deep rapids, which in turn made way for dry valleys edged by distant snow-capped mountains.

After heading inland, we spent two days following the McKenzie River and gently ascending, before starting a six-hour ascent of the McKenzie Pass. The Old McKenzie Highway was closed to vehicles, but still open to bicycles, for a month because of weather. We rode in silence on a slow, gradual climb from 305m to 1524m through spruce, fir and pine trees, then sub-alpine flora and mist. It rained, it hailed. Machine-ploughed banks of snow lined the road.

The summit was exhilarating and felt like being on top of the world. Tips of snow-covered peaks surrounded a flat volcanic plateau scattered with black, dark-brown lava rocks. The sun came out, snow gleamed and two other tour cyclists joined us to celebrate reaching the summit. Descending was much speedier than ascending!

Oregon was also the location of one of my worst days. This was in Hells Canyon. Having ridden through this canyon, we then cycled along the Snake River in temperatures of more than 37degC and into a headwind. It seemed an incredibly long, lonely road. The heat was remorseless and shade was almost impossible to find.

There was little consolation upon arriving at the unfriendly McCormick Park campground: the hiker-bike camp sites were useless unless you carried a heavy mallet. The park seemingly catered only for large recreational vehicles (RVs). Expanses of irrigated grass were for decoration, not camping. Although we had already paid, the camp ``host'' suggested pitching our tent outside the campground; presumably on gravel beside the dam reservoir. We could not leave, as steep hills surrounded the camping ground and our only way out would be a half-day's ride up the side of the dam. Thankfully an RV owner took pity on us and offered the awning beside his huge home on wheels.

Montana and North Dakota were the next two states we cycled across, and Montana was the hardest of our journey. We crossed the Rocky Mountains and Continental Divide, although this wasn't too bad compared with our five significant mountain crossings in Oregon and Idaho. What was bad was the heat. We cycled for eight days in temperatures ranging from 37degC to 48degC. The landscape was vast and desert-like. Towns, shops and ranches were few and far between.

Kel carried seven litres of water and I, one litre. Although we rose at 4am to beat the heat, it was stifling by noon and shade was almost impossible to find. We drank and drank. Deer, antelope and snakes were our most visible companions.

When we did stop at towns, they were tiny. They had names such as Winnett, Coffee Creek or Sand Springs, which consisted of a store with a post office and a petrol station, church, school and about four homes, plus some outlying properties. People in this desolate, remote area were kind. Most ranchers we met were reserved, genuine and displayed a quality we didn't experience elsewhere in the US: perhaps a resilience born of farming in very tough conditions. 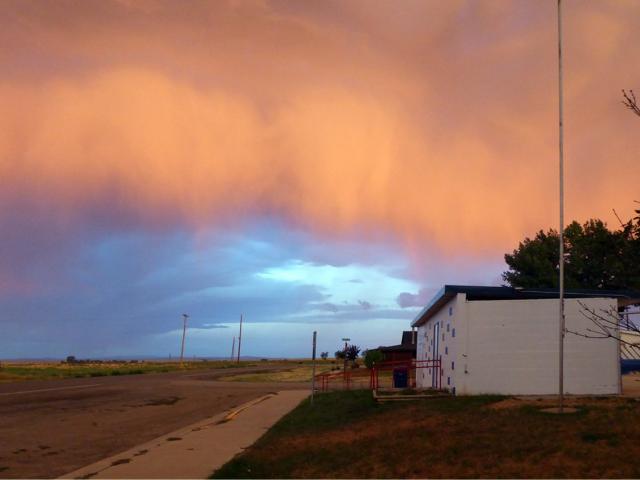 A storm approaches at sunrise in Winnett, Montana. PHOTO: KEL FOWLER
In Winnett, we awoke at 4.45am to heavy winds and an approaching storm. As we quickly packed our tent, a thunderstorm started around us. Volunteer firefighters pulled into the Kozy Korner Cafe to buy coffee. We cycled off with dark clouds all around and lightning in the distance. Another time, a severe electrical storm occurred while we camped in a town park in Circle. Needing to rise at 4am, we went to bed at 7pm. It was still 35degC. A few days later and the huge wildfires ignited by these storms could have halted our ride.

After the isolation of Montana and the straight roads of North Dakota, Minnesota's more than 10,000 lakes were most welcome. However, the accompanying mosquitoes were not! We then cycled down the Mississippi River to Iowa, across Wisconsin and Michigan, into Canada's Ontario and back down to New York state. 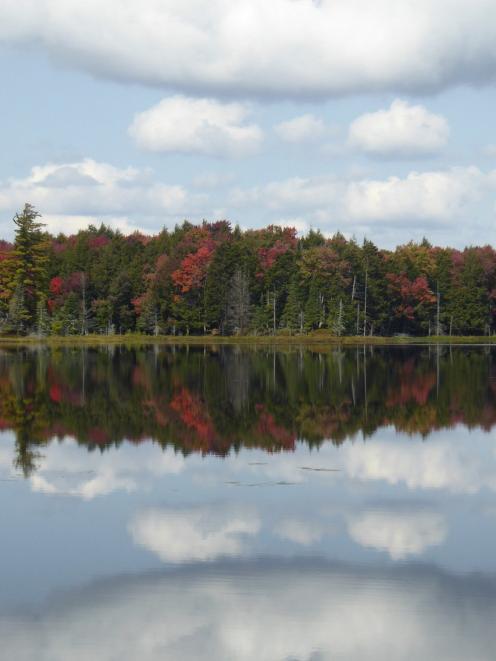 The beauty of a lake in New York state, USA. Photo: Kel Fowler
New York state was another favourite. The people were friendly and, as in Oregon, Iowa and Ontario, some invited us into their homes to sleep or offered their backyards for our small tent. We particularly enjoyed cycling along the Erie Canal Towpath Trail and later the Adirondack Mountains. In brilliant sunshine and under blue skies, the forests shimmered with brilliant autumnal red, yellow, burnt-orange and purple leaves. We rode past apple and peach orchards, quaint Amish farm stalls selling maple syrup, squash and other autumn vegetables and ponds reflecting the season's beauty.

We cycled through Vermont and New Hampshire in two days each, then Maine took much longer. Our usual daily distance was 80km, although we initially rode about 50km a day, including over Oregon and Idaho's serious mountains. Once we'd got to the east coast, in one day we rode 99km over New Hampshire's startlingly beautiful 870m Kancamagus Pass. Our longest day was 135.5km, when a strong tail-wind sped us along. 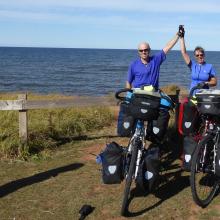 Kel and Sharon Fowler with their trusty bikes on Prince Edward Island, Canada.PHOTO: SUPPLIED
After 16 weeks' cycling across the northern states without seeing the sea, we excitedly greeted the blue Atlantic Ocean in Maine. I wrote: ``We have smelt and sensed nearing the ocean. So blue and on a sunny day, lovely.'' The Atlantic Coast of the US, and particularly Canada, was another highlight of this transcontinental trip. Canada's provinces of New Brunswick and Nova Scotia delighted with their deep-blue sea bays, autumn colours, lobster nets and fishing villages.

Our destination was Prince Edward Island and we reached it on October 6. We rejoiced upon reaching the red cliffs near Cavendish, then Green Gables Heritage Place, home to the fictional book Anne of Green Gables. However, for several reasons it proved simpler to keep cycling; so we did, onwards at first by ferry then bikes to Halifax in Nova Scotia. Thus our big bike ride ended in Halifax on October 14, having cycled 8000km through 12 US states and four Canadian provinces. 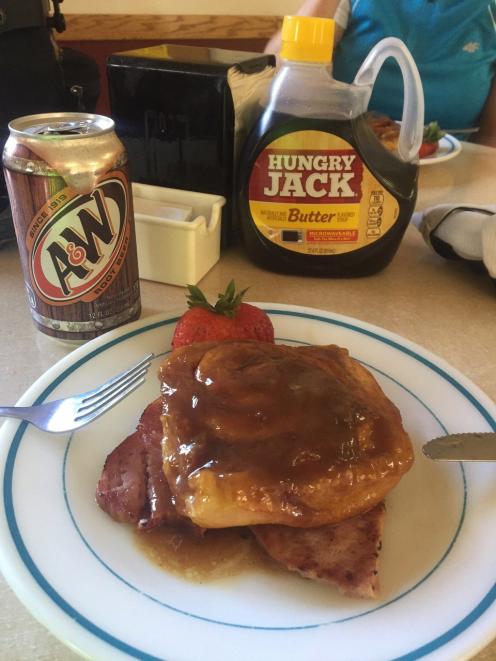 Caramel pig served at the Marion Community Cafe in North Dakota, USA. Photo: Kel Fowler
It had been a dream and we are grateful we could fulfil this. Despite hail, heatwaves and sometimes boring straight roads, we enjoyed most days. We stayed with good friends, made new ones and experienced small-town America at ground level. Often literally, as we slept in these town's parks for free. We talked to hundreds of strangers wanting to know about our ride and were privileged to glimpse their lives. While we usually cooked our own meals, we occasionally sampled local delights, such as one man's Caramel Pig invention: a large cinnamon roll placed on a slap of cooked ham and covered in caramel sauce - only to be eaten while cycling across a continent!
Comment now