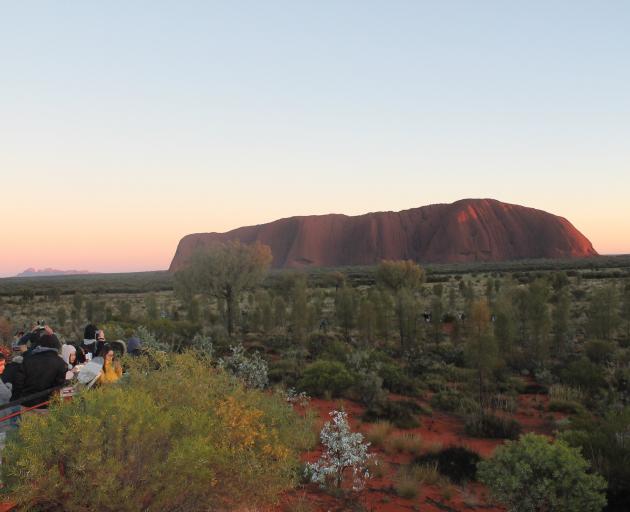 View from the sunrise platform . . . crowds waiting for the sun to hit Uluru with Kata Tjuta (the Olgas) in the background. Photo: Kerrie Waterworth
From this weekend tourists visiting Uluru, or Ayers Rock, in central Australia will no longer be allowed to climb the popular attraction. Kerrie Waterworth explains why she believes banning climbing and walking on Uluru is long overdue.

As an Australian-born naturalised Kiwi, I can tell you climbing Uluru has been a popular activity for tourists for as long as I can remember.

It actually dates to the 1960s when a local cattle station put a chain along a section of the climb and tourist numbers started to increase.

Growing up in Sydney in the 20th century, I had only ever known it as Ayers Rock, named after South Australia’s Chief Secretary, Sir Henry Ayers.

I was aware it had a special place in Central Australian Aboriginal culture, but like almost all non-Aboriginal Australians, I had no idea which tribe claimed ancestry to the rock or why it was important.

It was probably mentioned in the news media if someone fell to their death climbing the rock, but it really only hit the world headlines following the disappearance of baby Azaria Chamberlain.

The bright orange hue of Uluru at sunset. Photo: Kerrie Waterworth
I was in my teenage years and in another world when in the late 1970s traditional owners, the Pitjantjatjara Council and the Central Land Council lobbied the then PM Malcolm Fraser and Aboriginal Affairs Minister Fred Chaney to amend the Aboriginal Land Rights Act (NT) to allow an Aboriginal land claim.

I was expecting my second daughter when the official name of the park was changed to Uluru-Kata Tjuta National Park in 1993, and totally immersed in child-rearing when the park was listed as a World Heritage site for its cultural landscapes in 1994.

Fast forward to the winter of 2016 and my husband and I are visiting Uluru for the first time with my sister and her then partner Aboriginal Australian activist, artist and community leader Vincent Forrester who is a traditional owner and was working there as a guide.

A few months before our visit, Vincent had been interviewed by the media about whether tourists should be permitted to climb Uluru.

‘‘Uluru is our most sacred site, and that people are still ignoring that and climbing that, just shows that people simply aren’t listening. 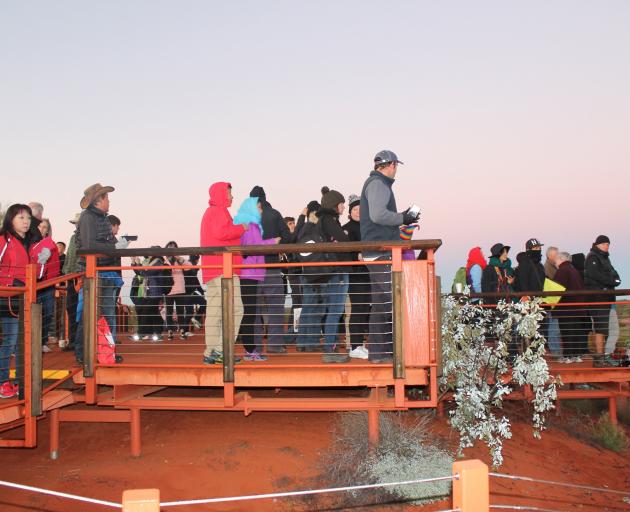 Hundreds of tourists waiting on the sunrise platform to take that early morning photo of Uluru. Photo: Kerrie Waterworth
‘‘There’s more stories around the base of the rock anyway.

‘‘Plus we also have a duty of care, people could fall off that rock and die, and we want to stop that.’’

Out of respect for Vincent, other traditional owners and Tjukurpa and Anangu culture, we had no intention of climbing Uluru but ironically it had recently rained so the morning we visited it was closed to climbing for safety reasons.

Earlier that morning, we had stood shoulder to shoulder with the hundreds of other tourists on the sunrise viewing platform to photograph that magic moment when the first rays of the sun hit the top of the monolith. 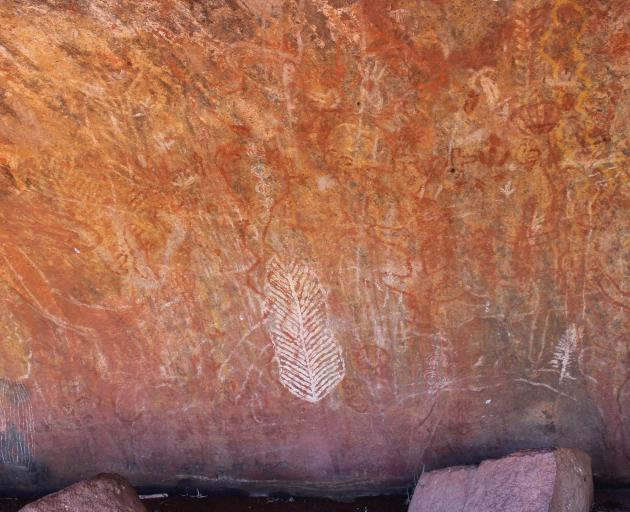 Some of the art found at the base of Uluru. Photo: Kerrie Waterworth
Then after breakfast we rendezvoused with my sister and niece for a guided tour of the Malu section by Vincent, where he explained the significance of particular formations in the rock, Anangu rock art and at a waterhole at the base of the rock, he pointed out petroglyphs, concentric rings just at the water level, saying they were incredibly ancient, and predated the time of his people. We continued walking the 10.5km track around the base of the rock taking note of the signs asking you not to take photographs at sensitive sites, marvelling at the different contours of the rock and enjoying the carpet of wildflowers that had sprung up following the rain.

Unfortunately, by the time we had reached our starting point the rangers had reopened the rock and we could see and hear a long line of tourists heaving themselves up by the chain immediately behind the signs asking them not to climb the sacred rock.

As well as spiritual and sacred reasons for not climbing the rock, there are practical ones too. An Australian National Parks Fact Sheet warns:

Traditional owner Vincent Forrester guiding around the base of Uluru. Photo: Kerrie Waterworth
‘‘The climb is physically demanding and can be dangerous. At 348 metres, Uluru is higher than the Eiffel Tower, as high as a 95-storey building. The climb is very steep and can be very slippery. At least 35 people have died while attempting to climb Uluru and many others have been injured. Every year people are rescued by park rangers, many suffering serious injuries such as broken bones, heat exhaustion and extreme dehydration.’’

The arrogance, the ignorance, and the selfishness of those who climb the rock was really brought home to us at sunset when so many stumbled down the rock in near darkness.

The next morning, we walked to a permanent water hole at the base of Uluru on the south side that had been a source of fresh water for millennia but was now polluted due to human waste coming off the rock up above. 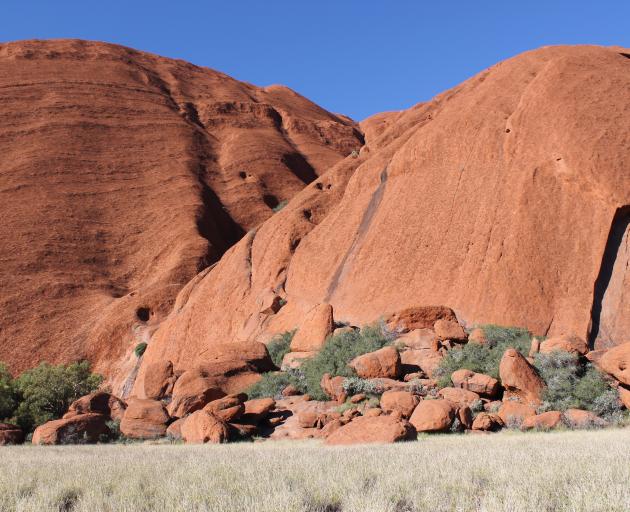 Uluru seen from the base perimeter walk. Photo: Kerrie Waterworth
There are no toilet facilities on top of Uluru, and no soil to dig a hole, so when it rains, everything gets washed off the rock and into the waterholes where reptiles, birds, animals and frogs live and depend on that water.

As a tourist who chose not to climb the rock and whose visit coincided with a period without climbers for a few hours, I can honestly say it made our visit to Uluru so special and so moving.

Three years on and the Uluru-Kata Tjuta National Park board of management have at last announced that tourists will be banned from climbing Uluru from today.

Chairman of the park board, Sammy Wilson, said in an interview with The Conversation website in Australia, https://theconversation.com/why-we-are-banning-tourists-fromclimbing-ulu... ‘‘some people, in tourism and government for example, might have been saying we need to keep it open but it’s not their law that lies in this land.

‘‘It is an extremely important place, not a playground or theme park like Disneyland. We want you to come, hear us and learn. We’ve been thinking about this for a very long time.’’

As a nation, Australia should have been thinking about it for even longer and never have allowed it in the first place. 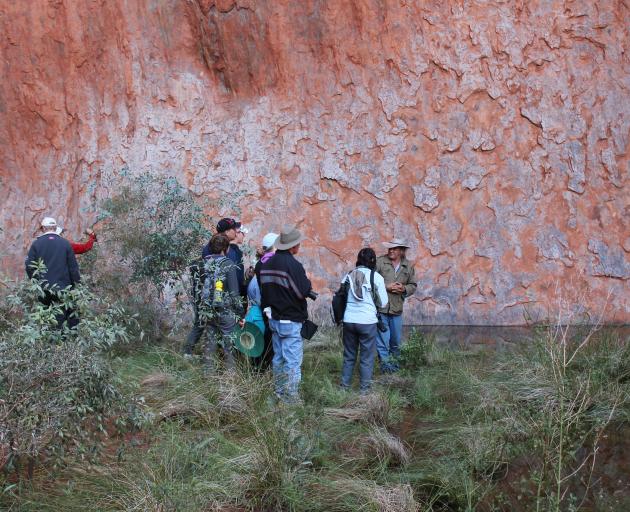 Tourists gather around traditional owner and guide Vincent Forrester at a water hole at the base of Uluru that is now polluted from human waste from climbers on the top of the rock. Photo: Kerrie Waterworth
kerrie.waterworth@odt.co.nz
Comment now