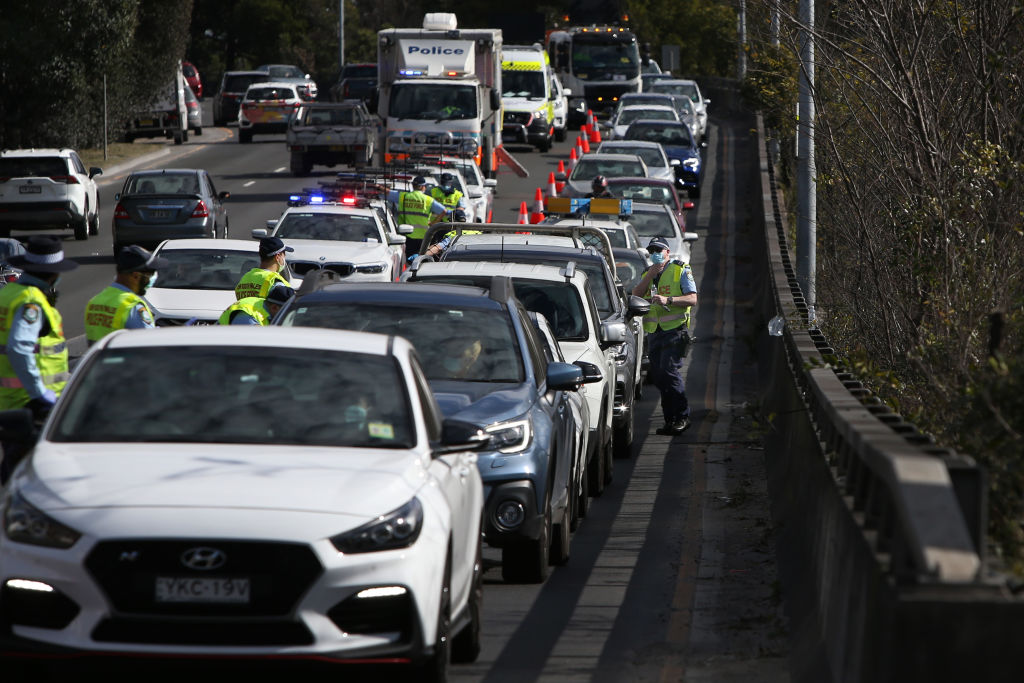 Police conduct roadside checks with drivers heading towards the Anzac Bridge in Sydney over the weekend. Photo: Getty
Australian officials have extended a snap three-day lockdown in the city of Brisbane and some neighbouring regions, while hundreds of army personnel began patrolling Sydney to help enforce Covid-19 lockdown rules.

Sydney, Australia's largest city, is into its sixth week of a lockdown as it struggles with a spike in infections that added nearly 3,500 cases since the first one was detected in a limousine driver who transported overseas airline crew.

Officials in New South Wales, of which Sydney is the capital, have implored residents to stay home to prevent more surges and brought in the military to help police enforce compliance after some defied lockdown rules.

Some 300 army personnel, who will be unarmed and under police command, will go door to door to ensure people who have tested positive are isolating at their homes.

New South Wales reported 207 locally acquired cases of Covid-19 on Monday, down from 239 a day earlier. Of the new cases, at least 51 spent time in the community while infectious, state Premier Gladys Berejiklian told reporters in Sydney.

After a steady rise in new cases, the lockdown rules in southeast Queensland, which includes Brisbane, will run until Sunday as officials fear there could be more undetected cases in the community and urged residents to get tested. Restrictions were due to end Tuesday evening.

Thirteen locally acquired cases were detected in Queensland state, up from nine a day earlier.

Australia is going through a cycle of stop-and-start lockdowns in several cities after the emergence of the fast-moving Delta strain and such restrictions are likely to persist until the country hits a higher vaccination coverage.

Prime Minister Scott Morrison has promised lockdowns would be "less likely" once the country inoculates 70% of its population above 16 years, which now stands at 19%. Morrison expects to hit that mark by the end of the year.

Although Australia's vaccination drive has lagged many other developed economies, it has so far fared much better in keeping its coronavirus numbers relatively low, with just under 34,400 cases and 924 deaths.