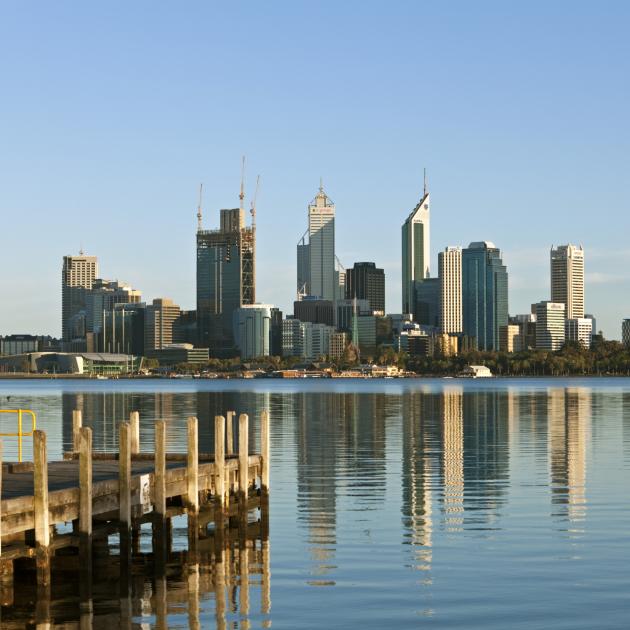 Perth. Photo: Getty Images
Metropolitan Perth and the neighbouring Peel region will go into a three-day lockdown from midnight on Friday after a hotel quarantine outbreak led to community transmission of Covid-19.

Premier Mark McGowan says the lockdown is a necessary measure after two people, including a man who stayed in the hotel and completed quarantine before flying to Melbourne, spent days in the community while infectious.

Anzac Day dawn services will be cancelled and all people in the affected regions must wear masks when leaving their homes from 6pm on Friday.

"I know this is hard to take and I wish we didn't need to be doing this," Mr McGowan told reporters.

"But we can't take any chances with the virus. We just can't."

The Mercure, which will no longer accept returned travellers, is one of three Perth quarantine hotels deemed to be of "high-risk" for ventilation issues.

Genomic testing has confirmed the virus spread in the corridors of the hotel from a couple who had returned from India.

A pregnant mother and her four-year-old daughter who were staying across the corridor tested positive and remain in quarantine at the hotel.

Victorian authorities on Friday confirmed a man who was staying in the room adjacent to the couple had also tested positive.

The man, who is asymptomatic, arrived in Melbourne on Wednesday after completing 14 days of quarantine at the hotel.

The premier on Thursday announced the Mercure would no longer accommodate returned overseas travellers.

It will instead transition to a "low-risk" quarantine hotel for a flight-load of seasonal workers expected to arrive from Tonga and Vanuatu next month.

Documents released by the government have revealed the extent to which it was aware of risk factors at its quarantine hotels.

Chief Health Officer Andy Robertson received a report on April 8 which identified three hotels - the Mercure, the Sheraton Four Points and Novotel Langley - as being "high risk" for ventilation issues.

Dr Robertson wrote to the premier last Friday advising that the Mercure was the highest-risk of the three hotels and it should no longer accommodate returned travellers.

The mother, who is six months' pregnant, and her daughter at the Mercure returned positive tests that day.

In his letter to the premier, Dr Robertson said the risks could be mitigated by changes such as installing HEPA air filters in rooms with positive cases.

"Assessment of the three higher risk hotels indicates that the Mercure Hotel is probably the most difficult to mitigate, given positive pressure rooms, opening windows and the age of the facility," he wrote.

The ventilation report was commissioned after a security guard at the Sheraton contracted COVID-19 in January, prompting a five-day lockdown.

Air New Zealand couldn't be contacted this evening, but according to Perth Airport's website, an Air New Zealand flight from Perth to Auckland is due to leave at 7.45pm local time (11.45pm NZT).

NZ176 is due to land in Auckland at 5.50am NZT tomorrow, according to Auckland Airport.

The flight is the return journey of NZ175, which arrived in Perth from Auckland today at 1.40pm today local time (5.40pm NZT).

The next flight from Auckland to Perth is NZ175 at 10am on Sunday.

At 7.20pm, Air NZ still had flights for sale between Perth and Auckland in both directions. It is, however, unclear if the flights will still take place.

As of yesterday, approximately 14,500 travellers have arrived from Australia since the bubble began, the Government said in its Covid-19 update today.