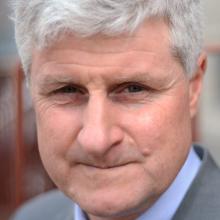 Peter Crampton.
The University of Otago is allowing a controversial anti-vaccination film to be shown on campus despite concern its message puts children at risk.

Otago University pro-vice-chancellor of health sciences Prof Peter Crampton addressed the controversy in an email sent to staff, in which he said the makers and distributors of the film were guilty of "scaremongering, and behaving in an anti-child manner".

However, the university chose to allow the documentary Vaxxed: From Cover-Up to Catastrophe to be screened on campus this Sunday to uphold its belief in free speech. The documentary, directed by discredited scientist Andrew Wakefield, claims the United States Centres for Disease Control and Prevention (CDC) covered up data showing a link between the measles, mumps and rubella (MMR) vaccine and autism.

Prof Crampton said several people had contacted the university with concerns about the film being shown on campus and vice-chancellor Prof Harlene Hayne had asked him to explain the university’s position.

"The screening here is able to go ahead simply to uphold the principle of free speech, but the university does not condone the movie or its contents."

He condemned the film, saying he and other health experts at the university had strong moral and scientific objections to its content.

"We believe the makers and distributors of this movie are scaremongering, and behaving in an anti-child manner, showing no regard for the health and wellbeing of children."

Truly Godfrey, a member of the anti-vaccination group promoting the film, Warnings About Vaccine Expectations,  defended it when contacted yesterday.

She encouraged critics to watch the film before making judgement and said much of the information health professionals, including in New Zealand, had on vaccinations came from the CDC, which the film argued was guilty of fraud.

There were hundreds of parents in New Zealand who had children  who ‘‘changed’’ after being vaccinated, who were ignored by medical professionals, Ms Godfrey said.

The group kept the exact location of screenings of the film around New Zealand, including in Dunedin, secret until hours beforehand to try to avoid some of the controversy which disrupted screenings offshore.

Dr Joanna Kirman, of Otago University’s microbiology and immunology department, said the claims in the movie had been discredited and put children in danger.

New parents were especially vulnerable to misinformation about vaccines because they genuinely wanted to do the best for their children and not put them in harm’s way, Dr Kirman said.

"It’s dangerous in the sense that we need to have high vaccination rates in order to protect not just individuals, but communities.

"When those rates drop then the community becomes vulnerable to getting diseases that we have been able to prevent in the past through vaccination."

While some parents believed in connections between their child being vaccinated and health problems, large population studies had discredited assertions made by anti-vaccination groups.

It was understandable parents searched for an answer to their child’s misfortune, but good scientific studies showed vaccines were safe.