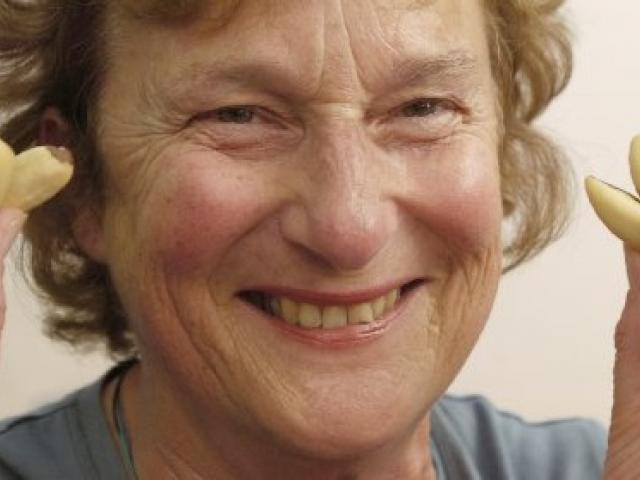 And good for you, too . . . Prof Christine Thomson, of the University of Otago human nutrition department, is nuts about the health benefits of regularly eating a few of the big Brazilian kernels. Photo by Peter McIntosh
A Brazil nut kernel a day will keep low selenium levels at bay, according to University of Otago researchers.

Eating one of the shelled nuts each day was enough to raise the average New Zealander's selenium intake to internationally recommended levels, and having two could lead to added health benefits, researchers said.

But you should not eat too many of them either.

Prof Christine Thomson, of the Otago human nutrition department, said new research showed the food was a simple, effective and relatively low-cost way for people to boost their levels of an essential micronutrient.

New Zealand soils had low levels of the element, meaning New Zealanders had a marginal selenium status compared with most Western countries.

There was mounting evidence marginal levels of selenium in the body could contribute to an increased risk for several conditions, including cancer and cardiovascular disease, she said.

Prof Thomson and colleagues have undertaken the world's first study of how much selenium people can obtain from eating Brazil nuts and the resulting levels of antioxidant activity in their bloodstream.

The research was recently published in the American Clinical Journal of Nutrition.

About 60 volunteers in Dunedin were divided into three groups. Members of one group ate two Brazil kernels a day, with the other groups given either a daily 100 microgram selenium supplement, or a placebo.

After 12 weeks, testing showed blood selenium concentrations in the nut-eating group were up by 64.2%.

The activity of a key antioxidant, glutathione peroxidase - production of which by the body depended on how much selenium was available - also rose 13.2% in that group.

Blood selenium in the supplement group was up 61% and the antioxidant activity increased by 5.3%.

Prof Thomson said people had long talked about Brazil kernels being high in selenium, but there had previously been no ‘‘really good evidence'' that consuming the nuts actually increased biologically available selenium levels in the body.

This provides the evidence that the selenium in Brazil nuts is bio-available. ‘‘It wasn't an old wives' tale,'' she added.

She warned about the dangers of excessive consumption. ‘‘People should be careful to limit themselves to no more than a few Brazil nuts per day, otherwise selenium could potentially accumulate to toxic levels in body tissues.''

The nuts also contained relatively high amounts of elements barium and thorium, and it was unclear what intake of these might be harmful, she noted.