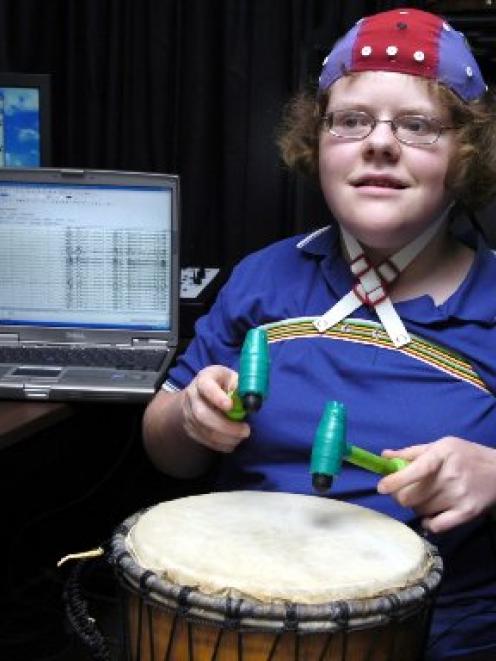 Complex tasks proved no problem for Gemma Stewart during testing. Photo by Jane Dawber.
Remarkable new evidence of the brain's adaptive power is emerging from University of Otago research involving Gemma Stewart, a teenager who was born without the usual band of fibres linking the brain's two hemispheres.


The corpus callosum is a band of millions of fibres which provides the major pathway connecting the left and right sides of the brain's cerebral cortex.

Some activities, such as tying shoelaces, peeling an orange and typing, require spatial coupling between the hands and are known as ‘‘bimanual actions''.

Many years of research have shown these skills depend on the integrity of the corpus callosum.

However, Gemma's recent impressive performance of a complex bimanual task during testing at the university psychology department has sparked excitement among researchers.

The outcome is also likely to contribute to some scientific rethinking and to generate wider international interest.

Associate Prof Liz Franz, who directs the department's Action, Brain and Cognition Laboratory, said: ‘‘Special people like Gemma, who was born without a corpus callosum, have provided tremendous challenges to our current thinking.

‘‘It was absolutely exciting and fascinating.

‘‘It was one of the most exciting observations that I've had,'' Prof Franz said.

In the laboratory, Gemma had faced a bimanual task designed to be one of the most difficult for a person with callosal agenesis - the complete or partial absence of the corpus callosum.

The researchers were amazed to see Gemma could perform without difficulty the novel task, involving manipulating a small object with high spatial precision, using both hands. She was also successful when her hands were blocked from her view, potentially making the challenge much greater.

Prof Franz said Gemma was ‘‘a delightful person to work with'' and ‘‘one of nature's reminders of how truly remarkable the human brain is''.

‘‘It is clear to me that some form of neural reorganisation would have to occur to compensate for the lack of direct interactions between her two hemispheres; otherwise, she would not be able to do these tasks with such precision,'' she said.

Gemma had shown a ‘‘lack of rudimentary interactions between the hemispheres'' of the brain in some of the very basic bimanual tasks being tested.

However, it also seemed clear that Gemma's brain had compensated for this lack of interaction in the more complex bimanual skills, she said.

Prof Franz has published some of the key findings in this research area during the past 15 years.

The research team is now busy analysing electroencephalographic (EEG) recordings taken when Gemma was undertaking the tasks, including some rhythmical bimanual actions.

The researchers are also testing other people with callosal agenesis.