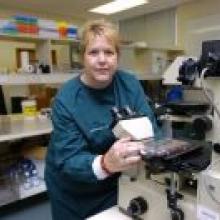 Researcher Dr Sarah Young was tempted to go overseas due to a lack of funding. Photo by Jane Dawber.
Several senior academic leaders at the University of Otago, as well as award-winning emerging researchers, have signed an open letter to Science Minister Pete Hodgson urging that the Marsden Fund be trebled to counter brain drain worries.

The letter's author, physicist Prof Jeffery Tallon, of Victoria University of Wellington, said the country's lack of basic research funding was a ‘‘slow-burning catastrophe'' that was contributing to the brain drain.

A total of 460 of New Zealand's leading scientists had signed the letter, including about 50 people at Otago University's campuses in Dunedin, Christchurch and Wellington, Prof Tallon said yesterday.

Otago University signataries include Prof Don Roberton, the pro-vice-chancellor, health sciences and dean of the Faculty of Medicine, and Prof Greg Seymour, dean of the School of Dentistry.

Prof Roberton said international studies showed every dollar invested in basic research eventually returned $3-$5 to society, including through employment gains and in improvements in community health and welfare.

The 7% success rate for Marsden applicants was far too low in terms of national capacity building.

He was also concerned some young researchers who could not gain sufficient funds were switching to more reliably funded work or heading overseas.

‘‘We cannot afford to lose that sort of expertise,'' he said.

In the open letter, Prof Tallon said the Marsden Fund was New Zealand's leading fund for basic research in science and the humanities, providing about $39 million each year.

‘‘Highly-ranked research proposals are rejected year after year simply because there are insufficient funds to dispense,'' he warned.

Dr Sarah Young, a Senior Research Fellow in the Otago microbiology and immunology department, said she had been unsuccessful in gaining a Marsden grant about two years ago.

Research funding problems could have forced her overseas, but she had since gained Health Research Council and Lottery Grants Board funding, securing her immediate future, she said.
Dr Peter Dearden chairs the university ‘‘Ozone'' group, which comprises awardwinning young researchers.

Dr Dearden, who signed the petition, said the Marsden Fund played a crucial role for young researchers because it was based on excellence.

Such researchers often had trouble accessing other funds because they lacked the necessary ‘‘track record'' of earlier research.

But the high Marsden rejection rate sent a negative message.

‘‘You're really saying to those early career researchers, ‘Don't bother','' he said.