"The crazy story is I actually got on a plane and flew to Italy to help run an international fire-dancing festival for a month. 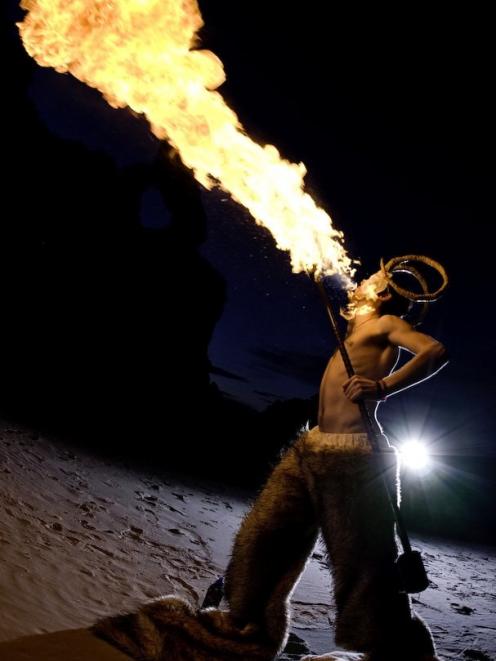 Highly Flammable Ltd creator Logan Elliott gets fired up at an event organised by his events business. Photo: supplied.
"Then I ended up flying back to New Zealand to land just in time for the 2011 Rugby World Cup and it was around that time that I had the Richard Branson gig as well."

He says being involved with the Virgin Airlines staff party in Christchurch was a major coup for his one-year-old entertainment business.

"I met someone who was the Virgin marketing manager and they ended up getting us on board because I told her about the business."

The Christchurch native says when he started a biotechnology degree at the University of Otago in 2006, entering the business world was something he had never considered.

"I think probably pretty early on I realised I wasn’t a typical science student.

"Science students tend to be a bit more introverted, but I’m probably a bit more extroverted so I wanted more social events and to have science students along to things where we could have serious seminars and free pizza afterwards."

While studying, he started the Applied Sciences Students Association, a project which saw him ‘‘running all sorts of events’’ including science balls, lectures and seminars.

He says forming the association equipped him with the basic skills necessary to run events.

However, it was only when he joined the Otago University Students Association (OUSA) fire club in 2007 that his passion for mixing entertainment and business was ignited.

"I got involved with that kind of as a fun, crazy hobby, playing with fire and stilt walking and then effectively I started performing."

He recalls running late into lectures with face paint still caked around the edge of his face during his undergraduate study.

"One of my good friends would have luckily prepared some of the experiments for me already and I think the lecturers kind of went ‘OK we are just not going to say anything, we are not even going to ask’."

The world of fire performance exposed him to people who had not followed a traditional academic path.

"I kept on meeting these interesting people who were doing amazing things around the university ... and I kept on finding out that lots of them had been studying the master of entrepreneurship and I thought, ‘That sounds great, I want to do that’."

He says he did not have a specific goal in mind when he started his entrepreneurship master’s in 2010 but  just a few weeks after starting, the opportunity to turn his fire performance hobby into an entertainment company became obvious.

Later that year, he began the "relatively full on" task of co-founding his entertainment company, Highly Flammable Ltd.

It took some people in his life a few years to understand the fire performance-based company was a viable, and even successful business idea.

"A lot of people early on didn’t take it seriously.

"They kind of went ‘Oh, OK,  this is a bit of a random hobby’, and I think, to an extent, even my family were thinking it’s just a phase, this random thing that Logan’s doing."

His playful business developed a serious side when he finished his master’s in May 2011 and began fielding requests from throughout the world for his company to do "some pretty outrageous" performances and events.

"We have done stuff for the All Blacks, big pyrotechnic shows with dancers and exploding pyrotechnics coming off the props they are holding.

"Another really memorable one was we have a character called Mirror Man, which is a full-body human disco ball.

"We lowered him into a boxing ring on a harness, dancing in midair with lights and lasers bouncing off him."

Six years on, the company employs 100 performers around New Zealand to entertain people at  corporate, private, community and sporting events  as well as running events abroad.

Now the main owner of the company,  he says a recent visit to the island of Stromboli, in Italy, provided a rare chance for him to feel the heat of the flames again.

"I was doing the performance co-ordination and stage management for it, which was incredible because the best fire dancers in the world come together to put on these big shows on this active volcano.

"I don’t actually get to do a huge amount of work like that any more, that was sort of an extra thing on top of Highly Flammable."

Eighteen months ago, he founded his second business, Lifetime Creative, which focuses on helping creative people hone their business skills.

The entrepreneur says he has no fixed place of residence, but returns to New Zealand over the summer to run events and give guest lectures to University of Otago entrepreneurship students.

"The year after I graduated, they invited me back as a graduate to speak about what I’ve done since finishing my masters ...

"I said to the organisers of the programme  the master’s is great but I think it’s missing a few things around business and they offered for me to share my experience with students."

He intended to return to the department again to tell students about the latest developments in his businesses early next year.

He says there is little science involved in either of his businesses, but he does not regret studying in that field.

"I try to say there is but, realistically, my specific science, no, there’s not.

"The analytical mindset of a scientist and the learnings of science have helped in my business life as well.

"I am very happy I did my science degree.

"Maybe I’m not in the specific science-related field now but the experience I had at Otago [was]  very well rounded, with a great atmosphere and social life but also lots of sport and cultural activities. I think it is an absolutely great place to study."

Course at the University of Otago: Applied sciences and master of entrepreneurship.

Favourite memory of living in Otago:  Running events for the uni (uni balls etc), performing at uni events, while a science student. In and out of the labs with face paint around the edges of my face.