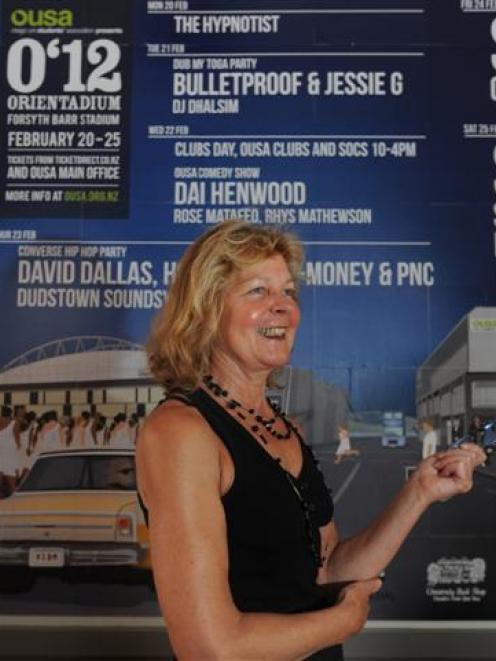 Star of the show . . . Donna Jones is this weekend celebrating her 21st anniversary of starting work with the Otago University Students' Association. Photo by Peter McIintosh
A photo-covered wall in the office of Donna Jones at the Otago University Students' Association headquarters says all you need to know about the self-confessed "people person".

She proudly points to pictures of past student presidents, bygone OUSA executives, and her favourite former colleagues and talks about the many memories she has from working for an organisation tasked with delivering services for those studying at the University of Otago.

"What's always attracted me about working here is the people contact, which I love.

I've met so many bright young things who have all gone on to do wonderful stuff," Mrs Jones says.

She is preparing to celebrate an important personal milestone with OUSA this weekend.

She is unsure how many 21st parties of her office colleagues she has attended, but knows many of her past OUSA associates are looking forward to being involved with her own 21st celebration this Saturday.

Mrs Jones - she is affectionately known by her workmates and members of the student executive as "DJ" or by the nickname on her favourite coffee mug "Mumma Donna" - has been a friendly fixture of the student association since she started work there in 1991.

She admits the close bonds she has developed with all those "bright young things" during her time at OUSA have inevitably led to her fulfilling many more roles than her administration position as association secretary demands.

"You can't help it. You're their friend first and foremost and when you like to talk with people the way I do, then they confide in you. Sometimes - and don't you dare write this - I've thought I should have a psychiatrist's couch in here, I've given so much advice during the years."

The 57-year-old widow and mother of two adult sons remains a close friend to many of the students with whom she has come in contact.

"I still keep in touch with everyone who has been president of OUSA down through the years. Some of them more regular. Many have become lifelong friends.

"I've been invited to their weddings, I've had trips overseas to visit them, and I've always enjoyed following their progress," she says.

While she talks, she points to the various photos on the wall, gesticulating and recounting anecdotes - most of them have to do with the experiences she has had with her colleagues and past associates outside the office.

Random meetings for lunch in a Lambton Quay park in Wellington - "I just bumped into a whole group of former execs sitting on the grass", weddings, restaurant dinners, birthday parties, and social occasions at the local pub.

A recent trip to the capital and a visitor's tour of Parliament saw her meet up with seven former OUSA student executives and a couple of past presidents, who all have existing roles within New Zealand politics.

Bubbly, bright-eyed, friendly, and enthusiastic, Mrs Jones can also be lioness-like in her protection of her young colleagues among the student executive and staff at OUSA.

She recalls the changing ides of university life and change in campus culture from the passionate political protests and campaigns of the 1990s, to the more off-beat political stunts to draw awareness to current issues facing students.

The at-times colourful campaign waged by the OUSA executive last year against the threat of voluntary student membership (VSM) was akin to the "heyday" of student protests when politically charged occupations of the University of Otago registry building were de rigueur.

"They were very visual affairs back in those days. I remember the occupations of the registry building. The protest placards. It was all very exciting. The VSM campaign had elements of all of that."

A fitness fanatic - one of her adult sons is a personal trainer - she likes to motivate her colleagues and office buddies, often organising fun runs, staff triathlons and tramping trips.

OUSA usually has about 40 people on its staffing roster, although this swells during the busy Orientation Week, when numbers can be up to 80.

She was a secretary at two Dunedin schools before she joined OUSA, and being surrounded by a constantly changing annual rotation of students has helped keep her young, Mrs Jones says.

"I really do feel very blessed to have come into contact with such a wonderful group of people."