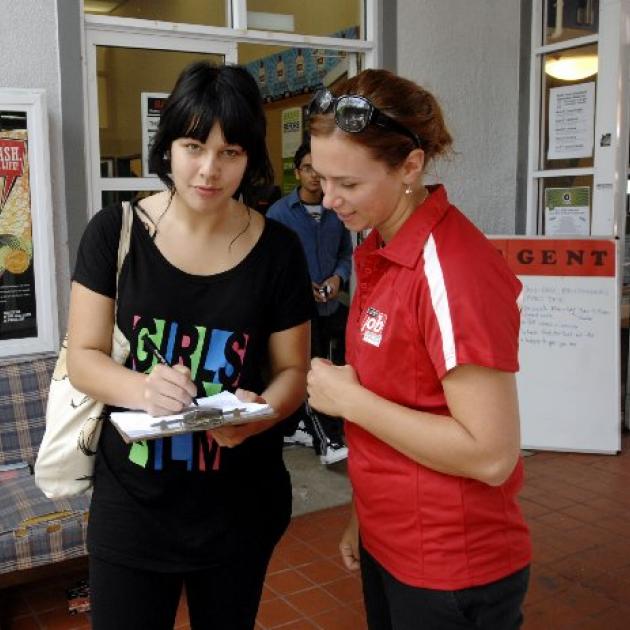 Sasha Ward-Faint (18) (left) fills out an enrolment form assisted by Lucy McAuliffe (21) from Student Job Search. Photo by Linda Robertson.
Working for a minimum wage, cleaning out scum from a Hamilton water tank may not be everyone's ideal job, but it was just one of the many thousands of jobs students find each year with Student Job Search.

‘‘We have been really busy, we have a new web system which can take a bit of time and we have still received 300 paper forms.''

She said students interested in employment could log on to their website, input their details and their skills would be matched up in a suitable job if it was available.

While SJS was well known to students and businesses, Mrs Barclay said it wasn't so well known with casual employers, particularly people in Otago and Southland looking for odd jobs to be done around the house.

‘‘Providing they can pay the minimum wage to the student, we can help them out. A few hours work is extra money for a student after all.''

While not every job was for everyone, such as the one for cleaning scum out of a Hamilton water tank, most students were just happy gaining employment.

One of the better jobs on offer in Dunedin over the last few months was working as a production runner on a film set, ‘‘they often call on a Friday wanting people for that Saturday''.

She said while the students were eager, she was often surprised to find out many had never worked before, or had never prepared a CV.

Student Ivan Larsen (22) said he was looking for part-time work and had sourced jobs with SJS before. Obtaining his bus and passenger license, Ivan said he always looked under the transport section for jobs because ‘‘not many students have these licenses''.

‘‘It is a good skill to have and it helps me earn some extra money while studying.''

SJS employment consultant Lucy McAuliffe said she got her job through SJS, and over summer ran a temporary office in her hometown of Lower Hutt.

‘‘I have worked a lot of jobs, but this is definitely one of the best.''