Police say they are taking “very seriously” a security threat that forced the postponement of two University of Otago graduation ceremonies today.

The university said it had received the threat electronically earlier in the week and advised of the postponement  - which affects 553 students - in a statement today.

In a standup outside the Dunedin Central Police Station at midday, Southern District Commander Superintendent Paul Basham said the threat was aimed specifically at the university's graduation ceremonies.

However, Otago Polytechnic chief executive Dr Megan Gibbons said they were continuing to monitor the situation and were having regular discussions with police ahead of the tertiary institution's own ceremonies which were scheduled for Friday.

Supt Basham said police were working with the polytechnic regarding their planned ceremonies and they would review their advice "on an almost hourly basis in order to get to a point where as quickly as we can we can provide authorities with the right advice so they can make good decisions on whether they go ahead or not."

Dr Gibbons said the safety of students and staff was their number one priority.

“We expect to make an announcement tomorrow morning – Thursday 10 December -- following an update from police.” 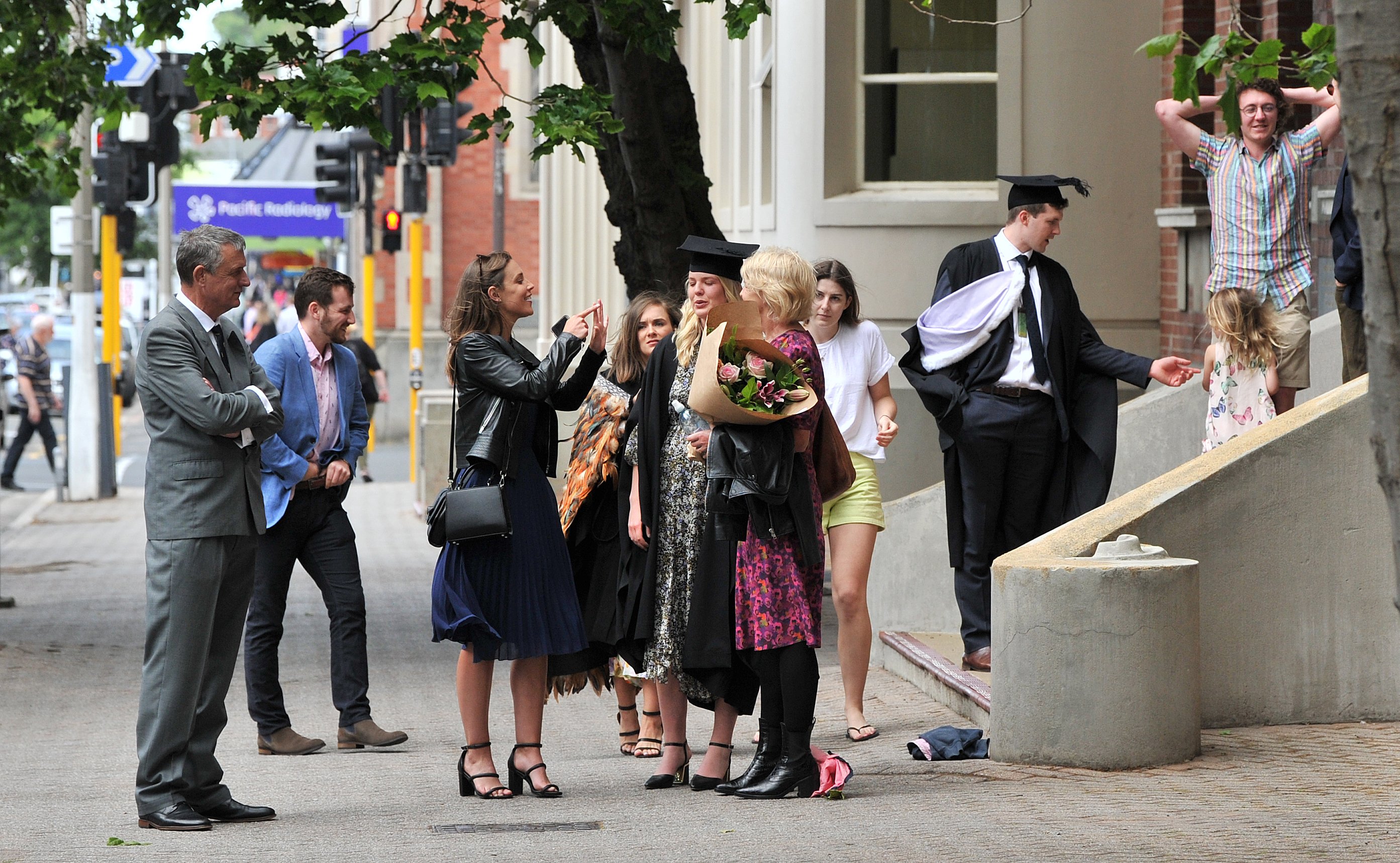 A student is comforted outside the Medical School building on Great King St on Wednesday morning. PHOTO: CHRISTINE O'CONNOR
Supt Basham said police and the university could not talk about the specifics of the threat and did not confirm that it had been made online.

"That said, we have increased the police presence at the campus, through the CBD and the high street. We have extra visible patrols out there and we have other specialist squads contingencies in place."

He appealed to the person or people who sent the threat "to come forward and bring this to an end".

Otago Daily Times staff outside the university's dental school were earlier asked by a member of the proctor's office to leave the area because "they are under threat here". He would not specify why.

People wearing graduation regalia told a reporter they were asked by a man to leave the area and disperse into the central city. Several were in tears. 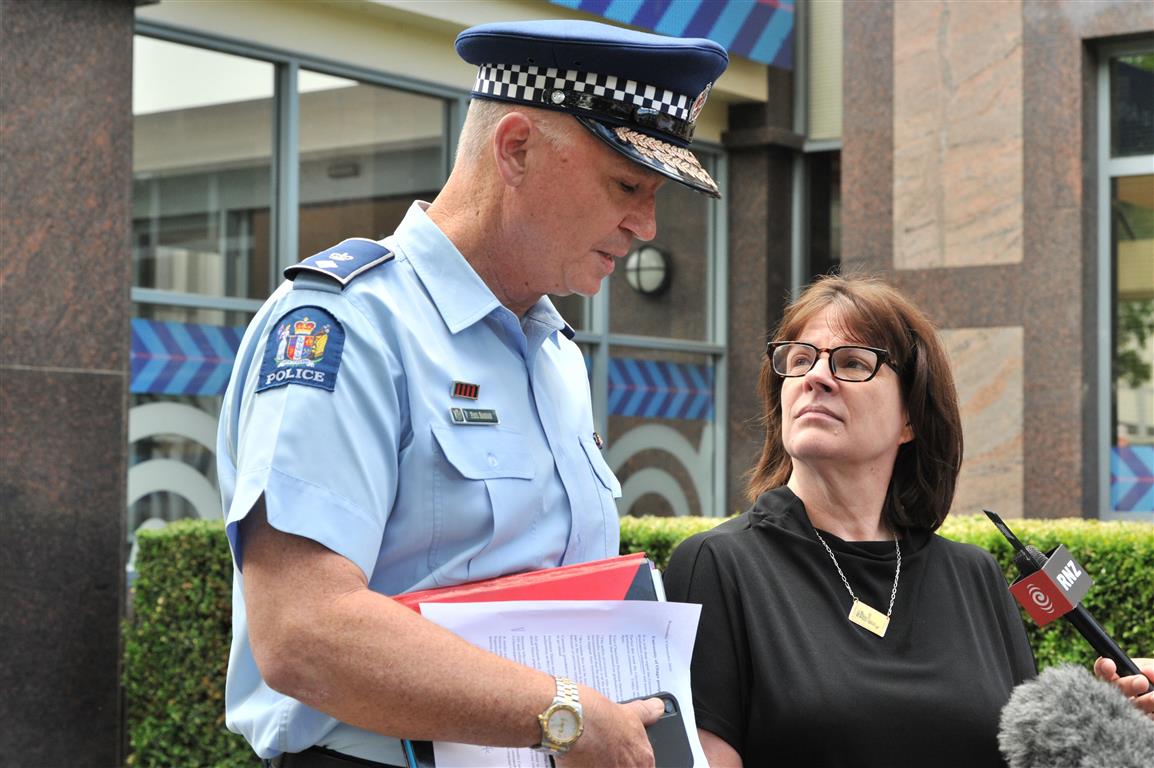 Supt Basham said he could not talk about when the threat came in, but police were working with the university "with urgency".

"The number one concern that we have is for people's safety... The threat is, at this stage, specific to the graduation ceremonies."

He said police did not know if the person had a specific grievance against the university but "certainly that's something that we will look into", and police had a wide range of technical ability to check if the threat came from New Zealand or overseas.

University Vice-Chancellor Professor Harlene Hayne, who appeared with Supt Basham at the standup, said students were told "as soon as we received the recommendation from the police that it was to be cancelled." 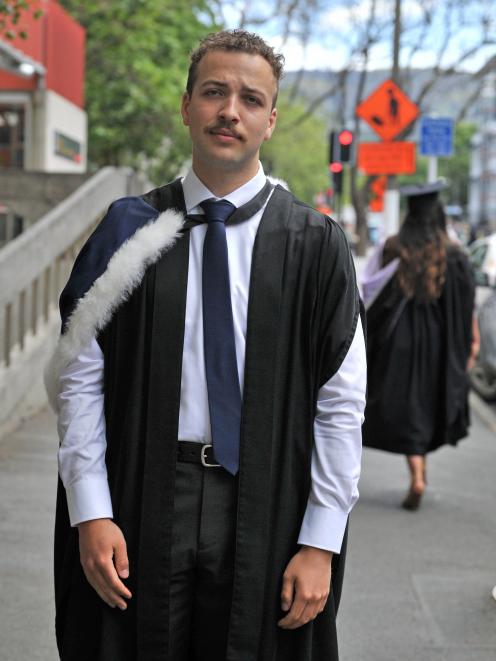 Hank Neimi was disappointed at the ceremony being postponed. Photo: Christine O'Connor

"The safety of everyone who was to take part in those ceremonies and the wider Dunedin community is at the heart of this very difficult decision. We realise that it is going to be incredibly distressing to our graduands and their families who were planning to graduate in person today ... I for one certainly share their disappointment."

Outside the dental school, Hank Neimi (21), of Dunedin, was to graduate with a Bachelor of Science degree this afternoon. His girlfriend and family, also from Dunedin, had been taking photos before the procession when they were approached and asked to leave.

He said it was disappointing not be able to graduate in person, but they had taken their photos and he was optimistic it would be rescheduled.

A woman nearby was in tears on the phone to her mother. She declined to be named, but said she was "gutted" after spending months preparing for her graduation.

Jodi Evans (21), of Dunedin, who was also to graduate with a Bachelor of Science degree, said there was initially a lot of confusion around what was happening, as people began to disperse. She was also feeling confused, and the fact she would no longer be graduating today had yet to sink in.

She and her friends were heading home because they "weren't feeling the safest", she said.

Graduands were told this morning the ceremonies would be postponed despite Otago University learning of the threat earlier in the week. PHOTO: CHRISTINE O'CONNOR

Asked if parents and students should come to Dunedin for ceremonies on Saturday and next Wednesday, Prof Hayne said: "Right now, hang fire. We'll keep you posted - as soon as we know anything, we'll let everybody know."

Currently, those ceremonies planned are scheduled to go ahead.

Asked if another ceremony would held for today's graduands, a visibly upset Prof Hayne said: "Right now the university is waiting to make sure that we can hold ceremonies in a safe manner.  And as soon as we can, we will be in touch with graduands who are here about what might be possible."

Graduation ceremonies this Saturday and next week are scheduled to go ahead. The University will continue to work with Police and authorities as they investigate the threat. Anyone who can assist Police with this is asked to call 105 or Crimestoppers anonymously on 0800 555 111

All Otago University graduands will receive information from the university as quickly as possible about future plans.  Updates will be posted on its website www.otago.ac.nz.