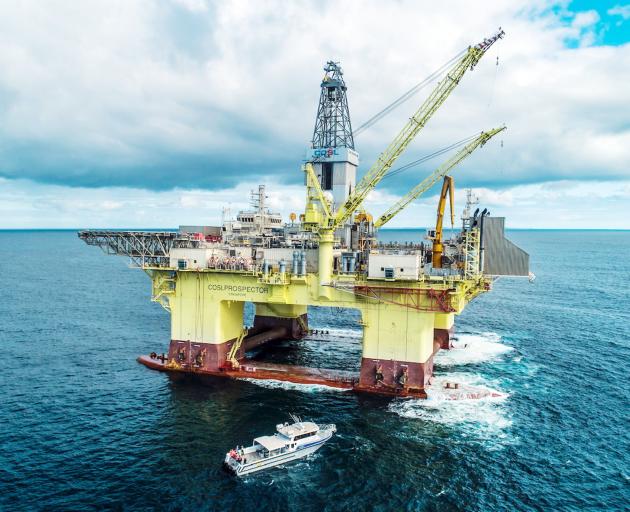 COSL Prospector and a support vessel. Photo: Supplied
After days of hearings, several protests and a whole lot of paperwork, an Austrian company's ship has started drilling deep into the Earth's crust in the Great South Basin.

An OMV spokesman confirmed it recently began the operation with the COSL Prospector at the Tawhaki-1 drill site, 146km southeast of Balclutha.

The company has permission to drill 10 exploratory gas and oil wells, but the intention was only for one at this stage, he said.

The applications to the Environmental Protection Authority were designed with a wide scope so the company would not have to go back with more applications later.

The drill will be lowered through 1400m of water until it reaches the seabed, and will then penetrate a further 1700m.

Workers had experienced some extreme weather conditions. However, the ship was ‘‘probably one on the most capable in the world’’ in dealing with adverse weather, he said.

It could work in up to 20m swells, although the company would cease operation in about half that to ensure safety.

‘‘There have been some weather delays, but operations are proceeding largely as planned.’’

It was difficult to know how long the operation would last, but it should not exceed two months, he said.

The purpose of the well was to test if there was an economically viable amount of gas at the site.

There were 130 cabins on the ship, which were likely to be filled with workers.

The activities have been met with numerous protests in Dunedin from groups against the extraction of fossil fuels.

Being so far out to sea made it difficult for these groups to follow, the spokesman said.

‘‘You’re talking pretty large capability vessels getting out there. That has been a bit of a saving grace.’’

The right to protest was ‘‘part of what New Zealand was built on’’, so long as it was done legally, he said.

Protesters were getting ready for action on land, however. A mock oil rig was erected in the Octagon yesterday.

Good to see the rig commence drilling. Most of Otago will be wishing the workers well in what many will know is demanding work away from their families. As for the protesters, going out that far to sea in what can be very dangerous conditions, that would be fool hardy, not to mention the fact a rescue could be equally dangerous. Exploration goes through a very long and lengthy process to get to this point, maybe some of those protesting could put as much effort into studying and intoducing cleaner technologies, that way we all win.....including the planet. For those who look to protest no matter what, how about working on reducing our need for fossil fuels by protesting those who consume large amounts of it for no productive reason? We're a University city, let's see the brains at work.