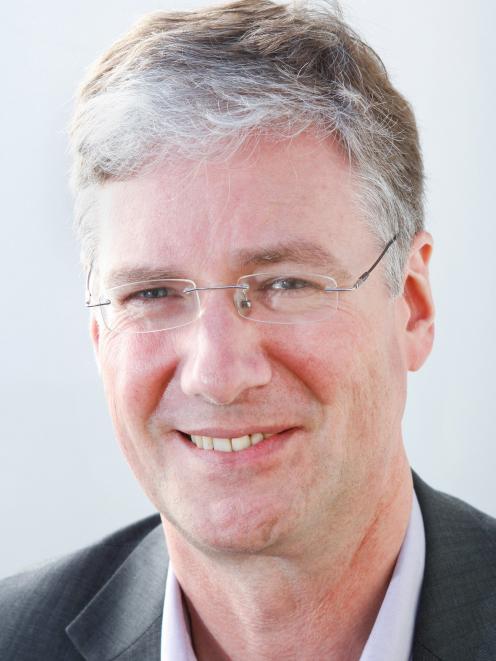 Simon Pickford. Photo: supplied
An $11 million new library for South Dunedin is set to be complete within the next four years.

The Dunedin City Council has approved the demolition of the existing buildings at the corner of King Edward St and Macandrew Rd in order to build a single-storey, purpose-built facility.

It is hoped demolition can start about the middle of this year. It is expected to open in the 2023-24 financial year.

An atrium area would provide a space to gather and could be used as an informal performance/event space.

The council announced in March 2019 it had bought the King Edward St-Macandrew Rd site.

Originally, a new build had been deemed too expensive, but once the council took over the buildings when major tenants moved out last year, it became clear a significant amount of work was needed.

Mr Pickford said the council bought the site because the location matched many of the community’s requirements.

"We knew there would be issues with the buildings and were aware they contained asbestos, as many older buildings do.

"However, when we took over the buildings when major tenants moved out last year, it became clear that the extent and cost of issues such as removal of asbestos was much greater than expected.

"Extensive building compliance work, including additional seismic strengthening, would also have been needed before any of the buildings could be reused."

The cost of reusing the existing buildings would be more than 50% higher than a new building.

Instead, $11.56 million had been included in the draft 2021-31 plan budgets to construct a new building.

Dunedin Mayor Aaron Hawkins said thanks to the work done so far, the council knew it could deliver the South Dunedin Library and Community Complex faster, and at a reduced cost, by constructing new buildings rather than remodelling the old ones.

"This will be a special facility for locals and visitors alike, and anything we can do to have the facility open as soon as possible has the full support of council.”

The new complex would include space for tenants.

Mr Pickford said staff had kept current tenants updated on the project and were working to help them relocate.

Constructing a new building would bring a range of benefits, including providing more scope for sustainable design and energy efficiency, potentially having lower running and maintenance costs, being more resilient in an earthquake and having a longer life than repurposed buildings, he said.

The new complex would be designed and built to minimise the risk of flooding.

The lease for the temporary library and community facility in the Cargill Enterprises building in Hillside Road had been extended until June 30, 2022.

An application to extend it further could be made, or other alternatives considered, closer to the time.

The council approved the new build option at a meeting late last year.

For commercial reasons, the decision was made during the confidential part of the meeting but is now able to be made public.

What a waste of ratepayers' money. This equates to approx $1000 per user household in the South Dunedin catchment area (approx 15,000 households, with land + building currently costing $15m). How many ebooks can you buy for that? Dinosaur thinking by the DCC. We have a mostly empty central library and we want a new one? Give a free bus pass via a refund for those who can show a same day South D region bus ticket and take out an item from the central library. Way cheaper solution, but then again- why are we really doing this project? This is the type of project that should be decided by a referendum costing approx $0.25m vs $15m. If rate payers we allowed to vote, it would be voted down by a wide margin.

A comment such as we couldn't look at the building because it was tenanted is just beyond belief. Would anyone buying a house have that attitude? No of course not, but its only ratepayer money so it doesn't matter.

However, I am sure that under the new CEO, Mr Pickford will resign if he fails to open the library before 24th January 2025 OR if the total cost is one cent over the allocated budget.
Personal accountability is what is needed from DCC, but that will be the day the pigs start flying.

I'm a fan of the library. A big fan. I use it a lot. But for goodness sake, during these times can you just stop spending our money. Yes our money. Just stop it. We can't be burdened with these huge rates rises. And you wonder why Dunedin has been one of the slowest growing cities in NZ for decades, it is because of these stunts. And to be one of the worst in a bunch of horrific councils... well done.

How long is this facility supposed to last? With talk of managed retreat from SouthD, building a fixed asset for many $millions seems like head in the sand thinking. Sure it can be built to withstand flooding, but kind of a waste if the community around it is inevitably going to have to move. ??

Just focus on the jolly infrastructure. Do something practical about the shoreline erosion and sort out the rubbish and the power, WITHOUT raising rates beyond inflation. The roads are rough, the footpaths full of parked cars, sewage leaking onto footpaths, power poles dangerously leaning over and regular power 'faults'. Bursting water mains, weeds everywhere and trees through the power lines. All this, and the DCC want to build another library, a theatre and build a solar farm in a place that has some of the countries LOWEST sunshine hours!
The increased CVs has meant a windfall for the DCC, and what do they do? Squander the extra funds on 'nice to haves' rather than catch up with the rapidly degrading and failing 'necessities'.
I'm all for the library, the theatres, the playgrounds, cycleways, historic restorations etc, but PLEASE, the basics are failing and falling apart.
This would have to be one of the most mismanaged, ill-advised, head-in-the-sand councils in New Zealand. I travel often throughout the country, and nowhere else do I see the neglect that I see here in Dunedin. Red tape to the whazoo, and reports to nowhere.
Where is the accountability?