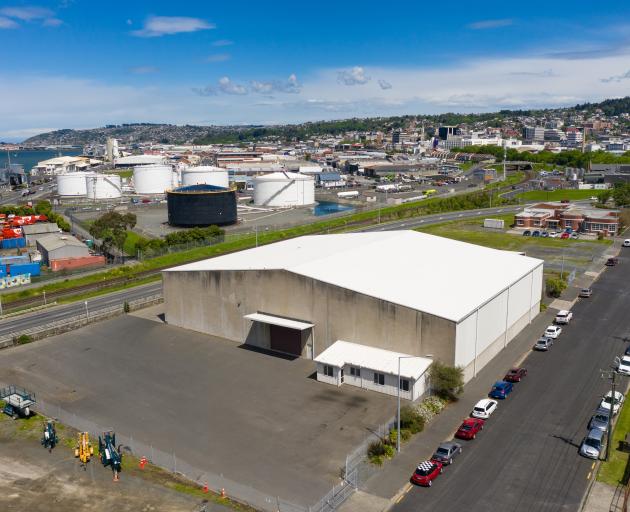 Responding to a government request to suggest 10 major infrastructure projects each valued at more than $10million, which could get started in six to 12 months, a film studio development was identified.

"The surrounding land provides ample land for screen production requirements and includes council-owned offices that are available for production offices," he said.

The space would be suited to television production or independent film production, and had already been used as offices and wardrobe storage when Netflix film The Power of the Dog filmed in Dunedin earlier in the year.

Mr Christie said the addition of an industry-standard studio alongside high-quality post-production at NHNZ meant all aspects of screen production could be offered in Dunedin.

"The city could realistically be considered a base for projects that want to film in the diverse locations in Dunedin and across the region.

"We really see the studio as a regional facility that could improve work flow for existing crew and screen businesses across Otago, activate the existing creative talent in the city and offer opportunities through education and training for talent to enter the industry.

"Our locations, heritage and modern architecture, wilderness, accessible beaches, rural and urban settings would feature in numerous productions, leading to opportunities in tourism and more."

"It would include a set construction and prop-making workshop, wardrobe space, production offices and more, depending on the amount granted," Mr Christie said.

If supported by government agencies managing the Crown Investment Fund, the studio could be ready within 12 months.

The facility could be used by anyone, but in particular by local, national and international production companies, film studies courses run by the education sector and productions such as iD Fashion and business events, and as a rehearsal space for the performing arts.

Dunedin Mayor Aaron Hawkins last week talked about the benefits of the identified projects for funding.

"Fast-tracking more than $300million worth of key infrastructure projects in Dunedin would help fuel the region’s economic recovery when the Covid-19 lockdown lifts, and create hundreds of new jobs across the city."

No doubt the long suffering ratepayers will be expected to stump up a bucket-tonne of cash for the sort of.projects, adding to even more rates increases while the rest of us struggle to get by.
During the covid 19 stuff, we need long term employment, not vanity pet projects.
Which is all it seems this council is good for.
So out of touch with the ones who pay the bills

Don't we have better things to spend money on at the moment FFS,the effing stupidity never ends.

They could film 'Stadium Story: A Warning" there. It would make an excellent Micheal Moore style documentary.

Business as usual from a greenwash council.

I applaud this move. Dunedin is a forward thinking, vibrant city. Diversifying on existing industry is positive step into a new business world.
Perhaps a widget factory paying minimum wages be a better option?
To the naysayers, I presume you don't own televisions..

How about doing a deal with the Regional Council so they can build their new office building on that site.
There is lots of places for staff to lunch close by and Marion wouldn't need to travel so far on her ebike.

Talk about ego projects that ratepayers can't afford. Unless this is totally government funded AND totally self supporting then it simply should not be done. But we all know who will be paying through the nose for this in two years time.

Trying to justify the need for the studio as rehearsal space for the performing arts has to be about as flimsy excuse as anyone could imagine. DCC staff dont remember the recent Fortune theatre closure. And all other production companies saying they were scatching to survive? But that was before the current closedown, maybe things are better now, in the DCC's minds.

Quote - John Christie "We really see the studio as a regional facility that could improve work flow for existing crew and screen businesses across Otago, activate the existing creative talent in the city and offer opportunities through education and training for talent to enter the industry."
I would see this as a 'nerve centre' of television and film production based right here in Dunedin. The potential for job creation should not be underestimated. Cast and support crews alone can number in the hundreds for some productions, all will need food/accomodation. The structure is already present, it is already owned by the ratepayer, so getting it productive makes much sense. Govt. seeding fund to get it up and running, a business case that allows it to support itself and we have home grown TV and movies. On top of that, film crews from overseas could potentially do a 2 week quarantine, then remain here for the duration of filming. That is all MONEY/JOBS for our local economy. We may just have a very unique and viable opportunity here folks.

....added to the above, maybe the Plastic Yurt would make an ideal filming venue based on the fact it has close proximity to the warehouse proposal and a lot of natural light? Lets face it, rugby won't be back for a long time, nor will concerts.
If we get to an 'elimination' standard, New Zealand becomes a VERY attractive place to be. Don't lose sight of that, we could well see ourselves in a VERY good position compared to the rest of the globe. Added to that, the well heeled could well be more than happy to undergo two weeks of some sort of 'Luxury Quarantine'. This could enable some early tourism and help sow the seeds to reinstate our tourism economy. Just a thought.......