2000 passengers jump on board 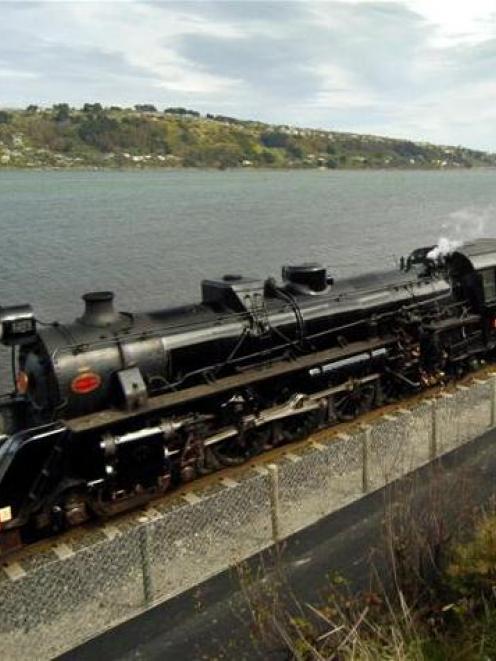 Locomotive Ja1271 travels along beside Ravensborne on Saturday afternoon. Photo by Gerard O'Brien.
Steam locomotive excursions between Dunedin and Sawyers Bay on Saturday were a trip down memory lane for passengers in the carriages - and those up front keeping the wheels turning.

A total of about 2000 people rode on the five excursions.

During a long career, he worked his way up to driver on steam and later diesel locomotives.

He has worked for the Taieri Gorge Railway full-time as a driver since retiring from the NZR 1991.

He described regaining his steam driver's certification two years ago as "the pinnacle of [his] career".

"I was a bit nervous.

"But when I sat in the seat in [the Kingston Flyer]and opened the regulator, it all came back to me like it was yesterday.

"A lot of that has got to do with the good training we had from the older drivers," he said.

"The pinnacle of my career has been getting to do steam again."

Mr Sloper believed it was important for remaining steam drivers to pass on knowledge to younger enthusiasts.

"There's no two ways about it, we are a dying breed.

"But many younger drivers are keen to get trained up for steam."

On one trip on Saturday, Mr Sloper and retired train driver Royce Kirk, of Dunedin, discussed their combined 100 years of railway service; the gold watch count increased when they were joined in the cab by a former traffic instructor who had also worked for NZR for 50 years.

"There's something special about being back on a steam train and, as Royce pointed out, it's part of our heritage as well."

There are about five steam-certified drivers in the Dunedin area.

"Steam finished in 1971 and many of the drivers are getting into their 60s and 70s now.

"But after the [Dunedin Railway Station] centennial in 2006, there was a lot of interest from the younger guys.

"In the next couple of years we want to train the remainder of our diesel drivers for steam."

Mr Craig said the company would offer steam excursions when engines were available.

"But they would be very expensive to run all the time."

Since the '70s, the infrastructure for running steam had been removed.

"We had to get the fire brigade to provide water at the station and whereas the fire for the engine was lit the night before, we can start a diesel engine an hour before each service."

A lack of turntables at stations such as Palmerston would also limit steam use, he said.

While Ja1271 could travel at about 70kmh forward, without a turntable it would have to make return journeys in reverse, at about 25kmh.

Mr Craig said by the 1990s, many steam engines had been scrapped, and those which remained would need extensive repairs to be made "rail worthy" again.

Ja1274, displayed at the Otago Settlers museum, was the last steam engine built for NZR, and would require a similar rebuild to be made operational, he said.

Taieri Gorge Railway could not use Ja class steam engines on its mainstay Taieri Gorge excursions, as only the smaller Ab class locomotives would fit through the narrow tunnels in the gorge.

On Saturday, several hundred people watched the train from vantage points along the track.