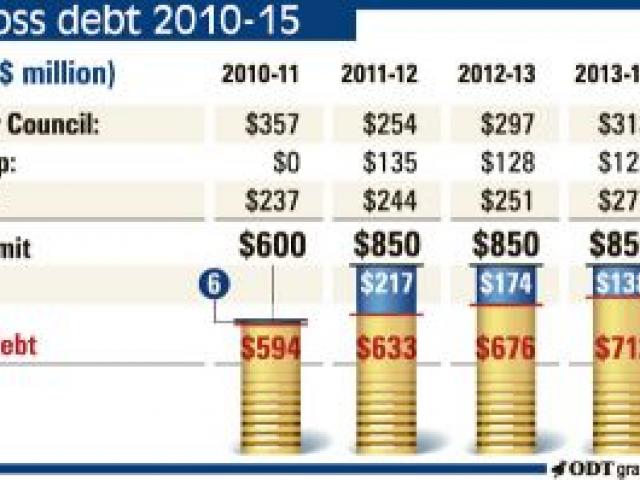 The Dunedin City Council looks set to increase its capacity to borrow by $250 million to provide security for gross debt that should hit $712 million by 2013.

Its finance, strategy and development committee yesterday agreed by just one vote to get the council to increase Dunedin City Holdings' (DCHL) uncalled capital to $850 million.

The increase was sought as gross debt climbed towards $594 million this financial year - just $6 million less than the current borrowing limit.

That meant council borrowing could be restricted if the uncalled capital was not increased, finance and corporate support general manager Athol Stephens warned.

If that happened, the Tahuna outfall, the Dunedin Centre upgrade and the Otago Settlers Museum redevelopment - which all straddled financial years - might remain unfinished.

It would also limit the long-term flexibility of council companies to take advantage of any "excellent commercial investment opportunity" that would increase dividends.

As planned debt increased, so did the level of security DCHL needed to demonstrate to lenders.

It was like security on a mortgage: like a homeowner, DCHL would never want to need to draw on its security - "if you have to call it, you're in trouble".

The increase did not mean debt would rise to $850 million: debt was forecast to decline gradually once projects, including the Forsyth Barr Stadium, were completed.

Cr Kate Wilson said an indebted business would cut its spending rather than increase its overdraft, and asked whether the $850 million gave more headroom than was needed.

Mr Stephens said the DCHL and DCTL boards felt it was reasonable and that to ask for much less would mean having to ask for more sometime earlier than the five-yearly average.

Cr Lee Vandervis said he was unhappy the council was being asked to increase the uncalled capital when the total gross debt was within just $6 million of the borrowing limit.

That DCHL might ask for more in five years implied "the rampant spending" driven by an unsustainable council spending culture would continue.

Cr Richard Thomson said the allocation should not signal the money was there to be spent.

The amount could be argued, but the council would be irresponsible to not meet its commitments.

The total gross debt projections for the Dunedin venues group was listed as $135 million for 2011-12 in the report to the finance strategy and development committee yesterday.

The stadium, and its debt, would be owned by Dunedin City Council-owned company Dunedin Venues Ltd (DVL).

Asked about the $135 million figure, Mr Stephens said the company would also take private-sector funding debt, which was about $30 million.

Because cash from private-sector funding, from the sale of tickets, would not begin to be paid until about the time the stadium was finished next year, the money has been covered by raising debt.

Mr Stephens said it would "come in quite quickly" once people started paying for their seating packages.