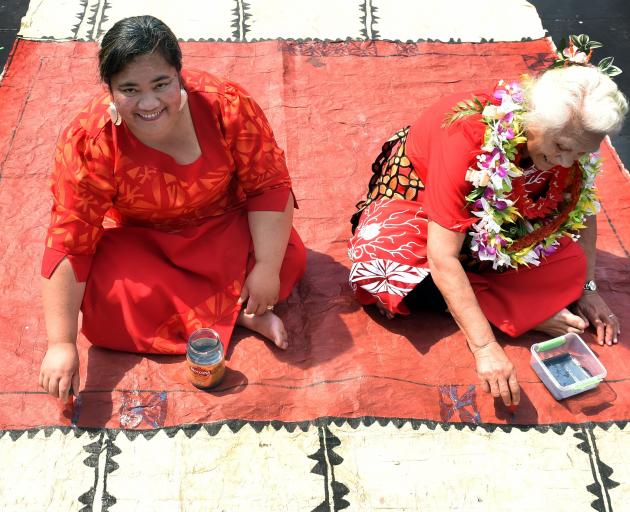 Applying motifs yesterday to a Tongan tapa cloth, for one of many cultural presentations at the Moana Nui Festival in Dunedin, are Kaufo’ou Katoa Pole (left) and Eulalia Vainikolo, both of Dunedin. PHOTO: PETER MCINTOSH
Receiving a more than $34,000 grant is recognition that the Pacific community is supported by the city council and Dunedin public, a Moana Nui Festival co-ordinator says.

The festival is one of the 33 recipients of $956,800 in funding, which has been allocated from three Dunedin City Council funds.

The city service, city project grants are made to groups supporting the social and arts and culture sectors.

Festival co-co-ordination Stacey Kokanu said she was "really happy" to hear that they had secured a $34,200 grant through the major community events fund.

This year, the event was the first of its kind and the biggest held in the city since a Pacific Expo at the Edgar Centre in 2007.

The funding was recognition that the Pacific community had support from the city council and the Dunedin public to go ahead with another festival, she said.

"It kind of establishes us as a legitimate event for Dunedin ... which we are really proud of because we have only had one."

It was also essential funding, as last year most of their funding came from a Covid-19 fund that was not available this year, Ms Kokanu said.

"We are really happy.

"The kaupapa of the event was always about bringing our communities together and sharing what is unique and special about our Dunedin-based Pacific community with the wider Dunedin public."

Ms Kokanu said she was proud to see what the community had achieved at this year’s event in February, and was anticipating next year’s to grow even more.

"We can expect something bigger and for the food to last longer."

City councillor Christine Garey, who is the chair of the council’s grants subcommittee, said it was "wonderful" to be able to support the festival.

The latest allocation of grants in the major community events fund also supported the organisers of the South Dunedin Street Festival and the Otago Nuggets for the first time.

“The South Dunedin Street Festival has gone from strength to strength, despite cancellations due to Covid-19 and weather in past years and has become a notable event on Dunedin’s events calendar."

Ms Garey said an additional $40,000 was allocated by the council to the city service, city project fund this year which meant $448,100 could be allocated.

"This has meant we can continue to provide valuable support for operational costs to social sector organisations and arts and culture groups.”