$3500 bill for Octagon grass as protesters hint end is near 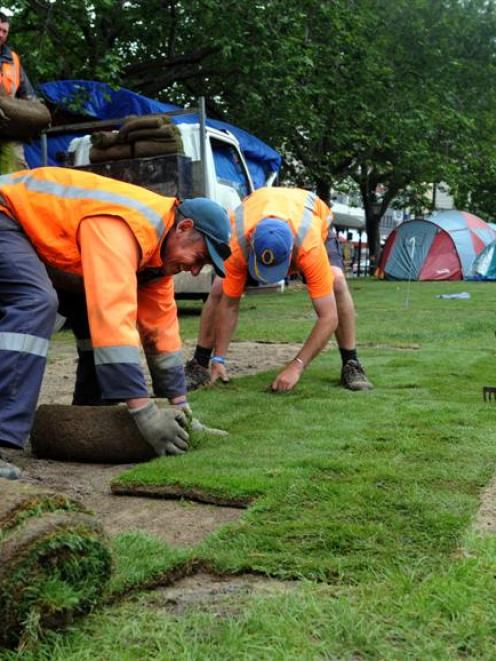 Delta workers Kevin Tansley (on truck), Alan Becker (front left) and Danny Greig work to lay new turf in Dunedin's Octagon yesterday. Photo by Peter McIntosh.
Dunedin City Council contractors moved on to the Octagon yesterday to replace turf damaged by the Occupy Dunedin protest, as one of the more established protesters hinted the occupation may be drawing to a close.

The council's move was in response to what community and recreation services manager Mick Reece said was an area of the Octagon that had been "dug up", near where the protesters tied tarpaulins over a small stage.

He had then discussed the issue with Mayor Dave Cull and chief executive Paul Orders, and a decision was made to "start fixing it".

The anti-capitalism protesters began camping on October 15, with more than 100 protesters and about 30 tents on the upper Octagon, reflecting a worldwide movement.

In early November, the council attempted to remove the protesters, but police ruled out enforcing trespass notices, as the occupiers had a right to protest.

Since then, the protest has slowly dwindled to about six tents, though there were a few more than that yesterday.

Contractors were brought in yesterday to start reconstruction work, and were told to start on the area beside the stage, then begin work on areas "nowhere near the tents", Mr Reece said.

That work would involve re-turfing, rather than re-seeding, as the "sand carpet"' underneath had to be reinstated.

The work on the small square behind the stage would cost about $3500.

Mr Reece said he was hoping the council would not have to returf the rest of the upper Octagon.

Asked what the council's plans were for the rest of the area, Mr Reece said the plan at this stage was to work on all the "unoccupied turf".

He had notified police of the work contractors were doing.

The contractors were told to "step away" if they encountered opposition to their work.

Police had attended, but were not required.

Kieran Trass, who has been associated with the Dunedin movement since October, said, when asked how long people would continue to occupy the Octagon, that there had been little discussion about the matter.

Occupiers were aware of times the Octagon was needed for other events, such as New Year's Eve celebrations.

"People think we will be here for ever," Mr Trass said.

That was not the case, as it was not a pleasant place to be, especially at night on the weekends, he said.

"It's a moment to moment thing," he said of the protest's longevity.

Mr Trass and another occupier estimated between 10 and 20 people were involved with the site, with some doing shifts to keep the tents occupied.