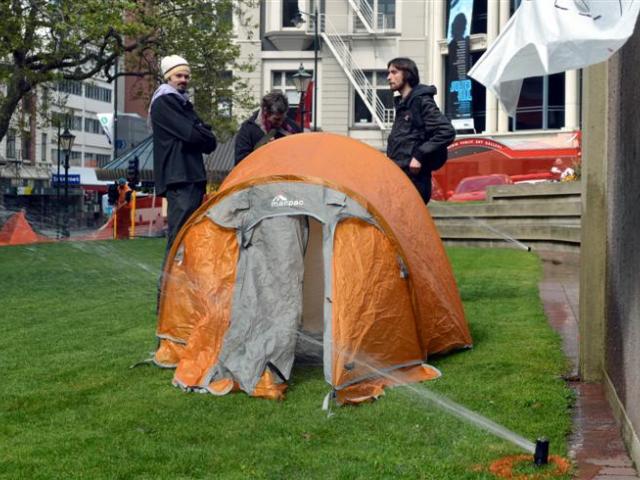 A year after Occupy Dunedin took over the heart of the city, they were back yesterday to re-occupy the Octagon - for a while anyway.

Thousands of Spaniards fed up with economic misery and waving banners against bankers have marched to mark the first anniversary of the grassroots "Indignados" movement that has sparked similar protests around the world.

Bailiffs began evicting British anti-capitalism activists from a protest camp outside St Paul's Cathedral in London in the early hours of this morning.

Prof Robert Patman puts planned assets sales into an international context and warns that the Key Government must be wary of the growing questioning of the global economic system and disparities of wealth.
New Zealand First leader Winston Peters was briefly denied the chance to address asset-sale protesters at Parliament today during an argument with the rally's organiser over whether he was allowed to speak.
Police have confirmed three officers are the subject of an employment investigation after they wore matching identification numbers at an operation to remove Occupy protesters in Auckland today.
Eggs were thrown and tempers rose from a small group of Occupy Wellington protestors as they cleared their gear from Civic Square this morning.

Occupiers may have been absent from the Octagon yesterday, but it is expected they will return, and when they do the Dunedin City Council will be watching, Mayor Dave Cull says.

The power to do something about protesters occupying Dunedin's Octagon lies with the city council, not police, and the council now has the ammunition it needs to act, an Otago University law professor believes.
About 20 people have been arrested this morning during a council operation to evict the last of Occupy Auckland protesters in the city's Aotea Square.

Police are investigating a complaint from the Dunedin City Council relating to the wilful damage of grass under repair in the Octagon.

The Dunedin City Council is having an easier time controlling daisies than it is tents that randomly pop up on an area of lawn it is trying to repair.

Two protesters have been arrested for refusing to leave the Occupy Auckland protest site at Aotea Square.

A protester was arrested and his tent removed by police, after the Occupy Dunedin group sprang back into action yesterday in "solidarity" with its Auckland counterparts.

The reoccupation of the Octagon in Dunedin looks set to continue indefinitely, although tents will come out only when there is a big point to make.
A judge has rejected as "draconian'' Auckland Council's application to send Auckland Occupy protesters to prison if they do not leave Aotea Square, where a handful still remain despite a court order.
The Auckland Council wants to jail Occupy Auckland protesters for 21 days.

The Octagon's occupation may be over but Occupy Dunedin protesters are promising a new phase to highlight their cause.
Occupy Auckland protesters have been given 48 hours to leave their campsite at Aotea Square.