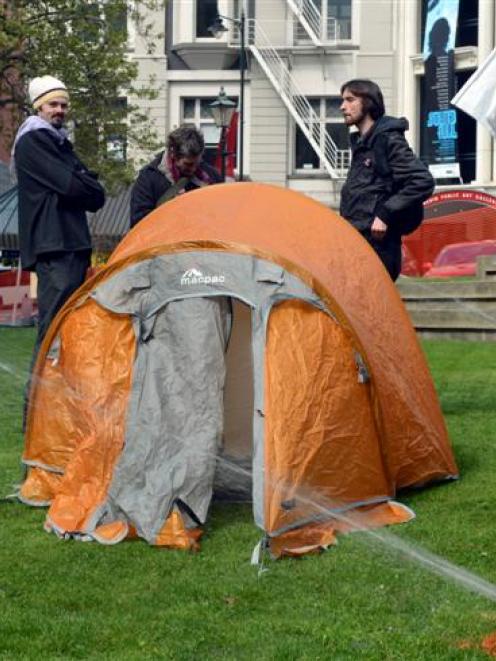 The arrival of the handful of protesters with a tent yesterday morning seemed to remind the Dunedin City Council it was time for routine maintenance of the grass. Accordingly, the protesters were asked to move and did so, vacating the grass but staying in the bandstand area for a few hours before leaving about 4.30pm.

Protester Luke Benton said Delta workers were "vague" about why they had to shift, initially saying the grass was to be mown, then saying the area would be "renovated".

Mr Benton said the group was willing to comply with the council's request, but the timing was "laughable".

The Occupy group planned to be more visible in Dunedin over the next few months with its message of the inequity of the financial system.

His main aim was to draw attention to New Zealand's reliance on foreign capital, which meant people paid exorbitant interest rates to offshore lenders. This made it difficult for families to afford the cost of living. The solution was the Reserve Bank issuing credit and charging low interest rates.

Last year, the occupation, which at its peak had about 100 protesters and 30 tents, drew the ire of the council, which tried unsuccessfully to get the police to remove the camp.

After springing up on October 15 it lasted 66 days, with numbers greatly dwindling before protesters wound up the camp.

Then, when a small group tried to set up camp again two days before Christmas, police did remove them.

The council was not trying to stymie the protest, he said.

Renovating the area was jargon for routine grass maintenance, he said.

Asked why sprinklers were turned on in the vicinity of the protesters despite the ground being sodden from recent rain, he said it was a routine test.