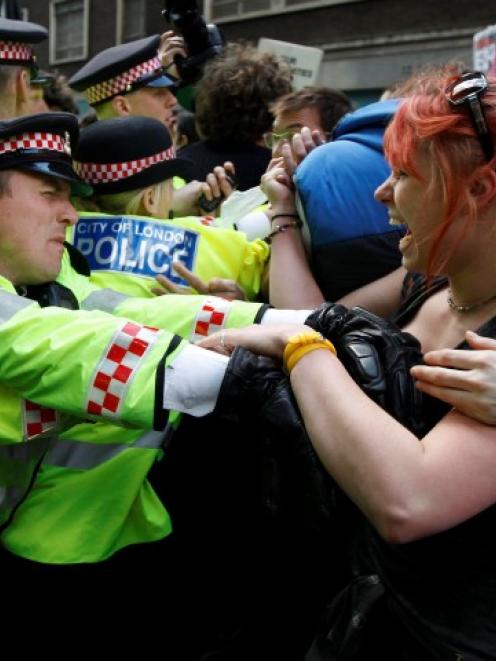 Demonstrators scuffle with police during a protest by the Occupy movement in London. REUTERS/Luke MacGregor
Thousands of Spaniards fed up with economic misery and waving banners against bankers have marched to mark the first anniversary of the grassroots "Indignados" movement that has sparked similar protests around the world.

Up to 600 people denouncing the Bank of England rallied in London and a Reuters witness said scuffles broke out between some demonstrators and police, with at least 12 arrests.

The Indignados and the offshoot Occupy and Take the Square movements had called for a global day of action against anti-debt austerity policies and the widening gap between rich and poor, but nowhere were protests as large as in Spain.

A year after tens of thousands set up a month-long camp in Madrid's central Puerta del Sol square, drawing international attention, indignant Spaniards have even more to be angry about.

Unemployment has soared to over 24 percent, over half the country's youth is out of work, the economy has dipped back into recession and one of its largest banks has been nationalised.

"We have to stand up and say enough is enough! They pull our hair telling us we're lazy so they can dismantle social welfare and take away health and education and now they're bailing out the bankers," said Gloria Bravo, 48, a civil servant.

Rescue money for banks, crippled after a 10-year building bubble burst four years ago, is a touchy subject for Spaniards, especially after the government took a stake in lender Bankia on Wednesday.

"They bail out banks but not people," banners read in Cantabria, northern Spain, home to Spain's biggest bank Santander.

Demonstrators gathered in more than 80 cities across Spain, chanting the slogan that has become a mantra at protests over the past year: "They say it's democracy but it's not."

In central Madrid, streets were blocked as activists convened in various neighbourhoods across the capital to march towards Puerta de Sol, which filled up with people waving flags and chanting to the beat of horns and drums.

"The situation is getting worse but the root of the problem remains the same; this is a moment of crisis for capitalism," Jesus Gonzalez, 38, an airline employee said as he made for the Puerta del Sol.

POLICE SEEK TO PRE-EMPT ANOTHER CAMP-OUT

Some 2,000 anti-riot police deployed to prevent protesters from setting up tent in the capital in a repeat of last year's camp-out.

Protesters vowed four days of demonstrations to inject fresh life into a movement that has suffered internal divisions.

The group behind the Puerta de Sol encampment last May - "Democracia real Ya!" (Dry), or Real Democracy Now - recently voted to register as a formal organisation, drawing the ire of the group's unconventional purists.

In London, up to 600 people marched through the centre of the city, the number dwindling to around 200 after the demonstration reached its destination at the Bank of England.

Protesters erected 11 tents nearby and flew banners that read "Bank of England, the St Paul's of money," in reference to St Paul's Cathedral, from which a long-running Occupy tent encampment was evicted in February.

"We're all here to show solidarity with the global movement..., groups that are forming against financial repression, political oppression," said Mark Weaver, 31, who is unemployed. "We're here to make change, and making change doesn't happen overnight, you've got to do it for weeks, months, years, and you've got to be consistent."

Occupy activists said they would dismantle the tents within hours and complained of police "aggression" and heavyhandedness. "We're under siege," said activist Ronan McNern.

Police declined comment on their tactics. They said only that four people had been arrested for public order offences.

In Moscow, a few hundred people camped by the central city pond in an Occupy-style protest over the police crackdown on a May 6 anti-Kremlin rally held ahead of the inauguration of President Vladimir Putin.