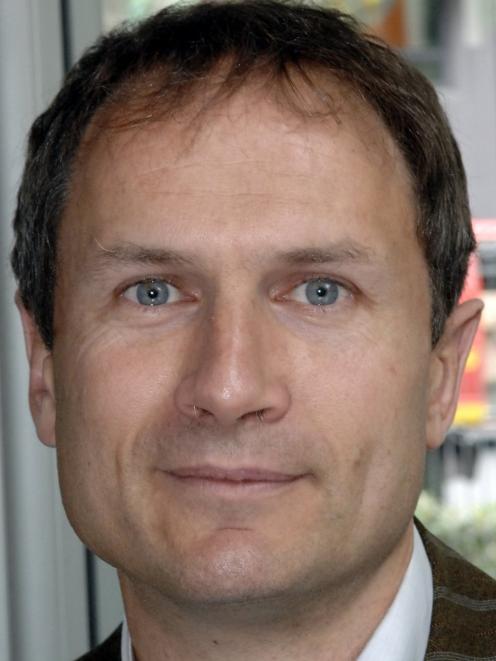 Andrew Geddis
The power to do something about protesters occupying Dunedin's Octagon lies with the city council, not police, and the council now has the ammunition it needs to act, an Otago University law professor believes.

Concerns about the occupiers, who have recently been erecting tents on a roped-off area of damaged grass in the Octagon, were raised yesterday by city councillor Neil Collins who called the protesters "layabout rabble" who were giving the Octagon a bad look.

At a Dunedin City Council annual plan meeting, Cr Collins said if Occupy protesters were being removed "by police" in Auckland, he wondered when that would happen in Dunedin.

More than 4000 cruise ship visitors were in the city yesterday.

He hoped the protesters could be moved as soon as possible.

Cr Collins later described the protesters as "layabout rabble", who sat about or lay in a hammock in the middle of the Octagon.

Tents had been erected on the grass in defiance of signs directing people to stay off the grass, which the council was re-growing after the recent occupation.

In the past, police had expressed concerns about the legality of removing the protesters, but that appeared to have been answered by events in the North Island, Mr Orders said.

Otago University law professor Andrew Geddis said he believed a recently issued injunction from the Auckland District Court gave the Dunedin City Council the support in law to use its bylaw prohibiting camping in reserves.

The Auckland Council successfully applied for the injunction, which ordered the protesters to cease residing in Aotea Square and also remove the various illegal structures in which they had been living.

Remaining Occupy Auckland protesters were this week served notices by the council's warranted officers requesting the removal of illegal structures from public land and, when they did not comply, council-employed security guards took the tents down, using statutory powers granted under existing bylaws.

Police were on hand in case things got out of order, and several people were arrested.

An Auckland Council spokesman told media the council's legal advice was that they were still able to confiscate gear despite the court not upholding a trespass notice against protesters.

He said the council's action was consistent with the direction of the district court decision.

Prof Geddis said the Dunedin council could piggy-back off the Auckland District Court decision and rely on it in court, as it effectively upheld local bylaws in the face of the Bill of Rights Act.

The Dunedin City Council could argue that in the Auckland protest, it was OK to use that bylaw to put an end to the protest.

In doing that, however, the council would have to weigh up whether it wanted to hire security guards to do the job; the fact the bylaw only gave the council the power to remove structures, which could mean that the people could remain with signs; that the forcible removal of tents could encourage more protesters to come to the Octagon; and that the protesters could fight the decision in court, where even if the council won, the likelihood of recovering costs was probably low.

Police would probably only get involved if efforts by security guards to remove tents dissolved into disorder, as it had in Auckland, he said.

"As far as the police are concerned, it's something they don't need to deal with."

Inspector Greg Sparrow said police understood the community's frustration in relation to the Occupy protest group. However, there was a process the council needed to go through to remove the protesters.

Police had had ongoing discussions with the council in relation to the matter and talked to Mr Orders about it yesterday, he said.

In relation to a wilful damage complaint to police from the council about a tent erected on the Octagon grass on Wednesday, police were looking into the criminal aspects of the complaint, he said.

Dunedin City Council operations general manager Tony Avery last night said the council was still considering the issues at hand, including taking a closer look at the Auckland District Court's decision, but had not made any decisions about the protesters.