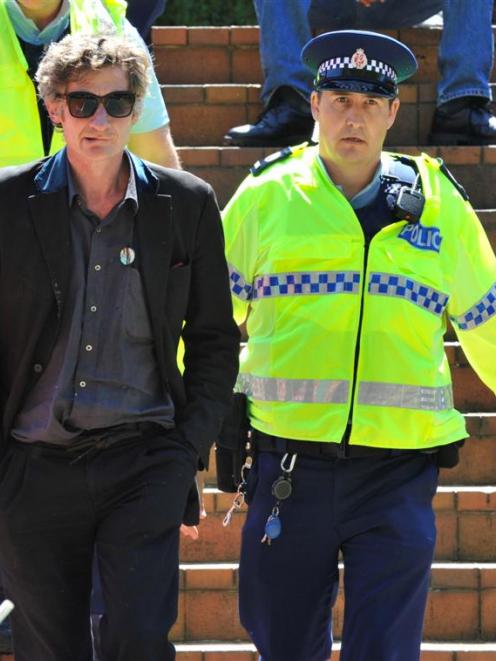 Senior Sergeant Craig Brown escorts a protester to a police car. Photo by Gerard O'Brien.
A protester was arrested and his tent removed by police, after the Occupy Dunedin group sprang back into action yesterday in "solidarity" with its Auckland counterparts.

The 49-year-old Dunedin man, who refused to be identified, had pitched his tent on the grass, and was arrested and charged with wilful damage and taken into custody, about 3.30pm.

Dunedin police dismantled the tent and removed it. The man had refused to take it down.

Another tent, in the stage area, was not challenged.

Senior Sergeant Craig Brown, of Dunedin, said the man was released on bail, with one of the conditions being that he did not return to the Octagon.

The man left the Dunedin Central Police Station and went directly back to the Octagon where he was arrested again for breach of bail. He was placed in the police cells, awaiting his appearance in the Dunedin District Court this morning.

Snr Sgt Brown declined to discuss why police took action yesterday, after not doing so during the group's 66-day occupation. While police had been removing the tent, protester Kieran Trass and a small group had challenged them to cite the law that had been broken.

Mr Trass told the Otago Daily Times he was "confused" about the tent's removal as police had not removed tents during the 66-day occupation.

All signs of an occupation, including in the stage area, were gone by last night.

Occupy Dunedin packed up last Tuesday after occupying the Octagon since October 15, saying the movement had moved to a new phase.

Occupy Auckland protesters who had until 2.30pm yesterday to leave Aotea Square packed up throughout the day and moved to Victoria Park, saying they would maintain a presence at Aotea Square.

Dunedin City Council community and recreation services manager Mick Reece said he had been told at 8am yesterday two tents had been pitched on the Octagon grass.

He visited the site and spoke to the occupiers, one of whom was Mr Trass, who has been associated with the Octagon movement since October.

"We told them contractors were coming to finish the work of renovating the grass" and it would be "hugely appreciated" if the protesters would get off the grass.

The protesters had told him why they had returned, which was to support Auckland protesters, but Mr Reece said his "narrow point of view" was just the health of the grass.

He understood that the protesters spoken to by council staff had agreed to move on to the stage area, which they did about 10.15am, after chalking slogans on a nearby wall.

The council planned to fence off areas of the grass that were being renovated following damage from the recent occupation, so they were available for New Year's Eve celebrations.

Mr Reece said he made "exhaustive" efforts to contact police, in case their help was needed, but was unable to do so.

The council had spent $3700 of ratepayers' money fixing the grass, he said.