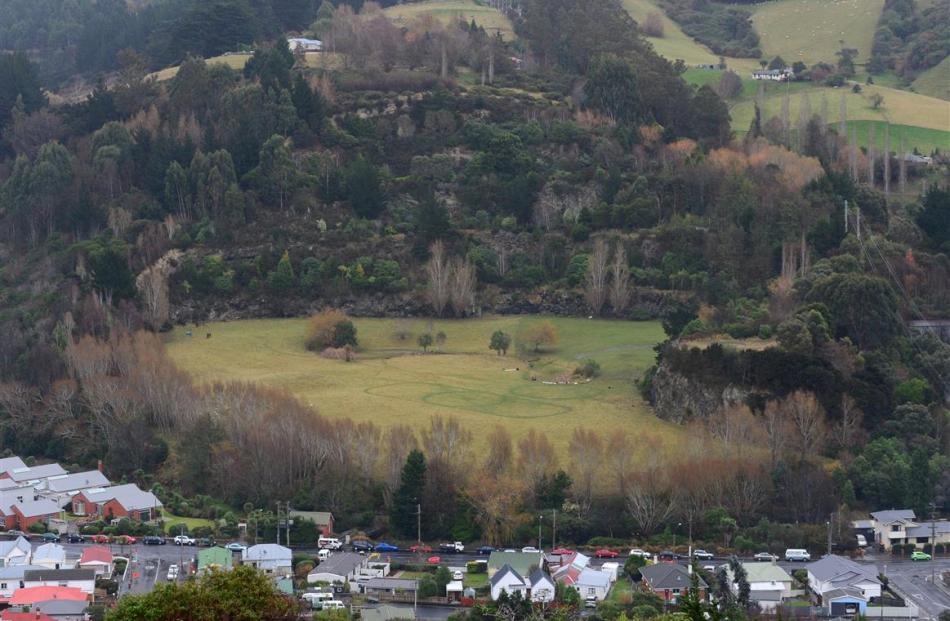 A Christchurch land owner is planning to sell part of the former Palmers Quarry Garden in Northeast Valley. Photo by Gerard O'Brien.

The Christchurch man who owns the Palmers Quarry Garden in Northeast Valley is trying to sell part of the land, hoping it will be picked up by a retirement home operator.

FBG Developments managing director Fletcher Glass said his idea was for the suburban Dunedin land to be used as a site for a retirement home, but he hoped the walkways and gardens could still be accessed by the public.

He has advertised about one third of the land for offers over $2million.

His decision to advertise the property as one that would be zoned residential 2 under a second generation district plan (2GP) still in a hearing process has been criticised by Dunedin City Council city development manager Anna Johnson.

The land is zoned a lifestyle property.

But Dr Johnson said there could be "quite radical'' changes to the proposed residential 2 zoning by the time hearings were done and final decisions made.

As well, any development would have to go through the resource consent process before it was approved.

There were concerns for the land last time it went up for sale in 2007, when 410 people signed a petition calling on the council to buy the property.

That did not happen, and Mr Glass bought it, saying then he was determined to maintain the garden.

The land had been the sole remaining asset of Palmer and Son, which bought it in about 1932.

It was transformed by Palmers Quarry former chief executive Jim Hunter after the quarry closed in 1980.

Mr Glass said this week he wanted any buyer to use the site for a retirement home.

"In my mind I really like the idea of people being able to spend their retirement in there,'' Mr Glass said.

He also wanted the area kept available as a public resource.

"I'd be really pushing for anyone who purchases it to promote the use of the walkways and the gardens in there to the public.''

"It was always on my mind when I purchased the property.

"There's a massive amount of heart and soul gone into it.

"I think it's something that should promoted.''

Mr Glass said the property was the first land he had owned, and would be the first he had sold.

His company did painting and decorating, rather than development.

He said he had been cold-called by real estate agents, and had decided to put it on the market in May.

There had been "a couple of offers so far'' from people wanting to do residential development there.

"I've really got my hopes one of the retirement operators will pick it up.

"There's something about that site that deserves something special being done in there.''

The advertisement for the property said it was notified for a change to residential 2 zoning under the 2GP.

It "lends itself well to retirement style development with medical centre or similar''.

Ross Home and Hospital and the Otago Community Hospice are nearby.

Residential 2 zoning provided for development at a minimum site size of 200sqm with overall density of one habitable room per 45sqm.

Mr Glass said the land on either side of the part being sold would be suitable for larger residential lots.

But Dr Johnson said it was "a bit naughty'' to market the property based on what the new rules might be.

"You have no idea how much they'll change, as that's what the process is for.''

She said Mr Glass had approached the council to rezone the land during the plan consultation process, and his was just one among hundreds of requests.

Dr Johnson said zoning did not deal with the specifics of any development.

That would happen if a developer went for resource consent.

Subdivision would not necessarily guarantee the maximum density the plan allowed, as the resource consent process would deal with the details at a more specific level.

"Without having a subdivision consent in place, it's really inappropriate to market a property.

"You should really only market a property based on development potential once you have a consent in place.''

The district plan hearings would run until March next year, decisions would take a few months, and rezonings would only become operative if there were no appeals.

Where there were appeals, it would take "significantly longer''.

Submissions on the plan had closed, but people could support others who already had submitted.