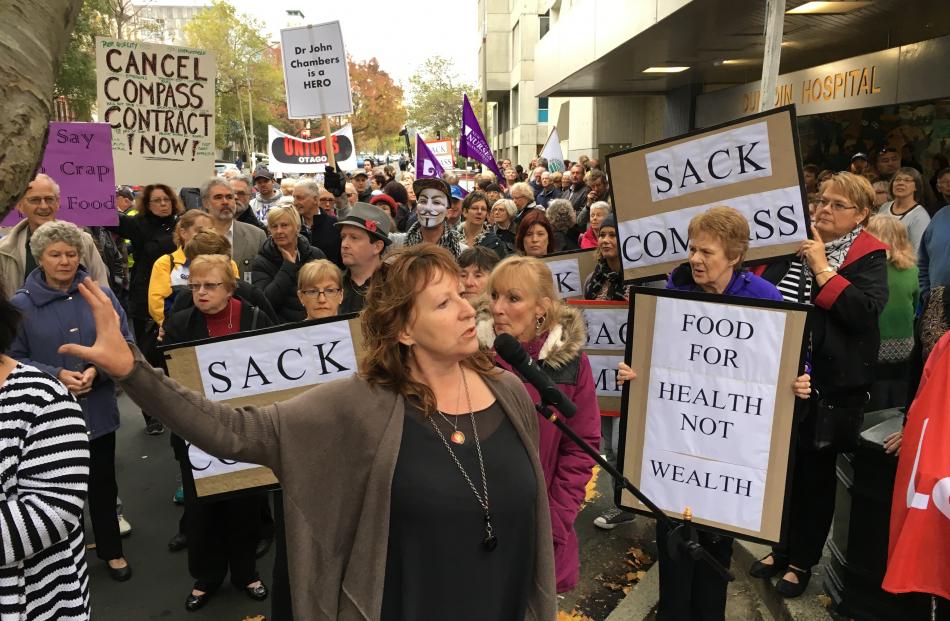 About 300 people carrying signs with slogans including 'Stop the slop' staged a protest today about the quality of Dunedin Hospital food.

The protest, organised by the Real Meals Coalition, called on the Southern District Health Board to cancel its food service contract with the Compass Group.

Compass has had a rocky start implementing new menus in meals on wheels, patient meals, and staff cafes in the South, but has said it has made improvements.

Invercargill Mayor Tim Shadbolt told the crowd Otago and Southland stood together to save neurosurgical services in 2010, and would win the fight against the poor quality hospital food.

Emergency department specialist Dr John Chambers said Christmas had been ''cancelled'' at Dunedin Hospital last year, as the usual special meal did not happen, and the canteen was closed.

Staff were left with meals to reheat, and it was unlike any other Christmas at the hospital.

The former board member said he did not want to speak to the crowd about Southern DHB outsourcing vote, but protesters' placards included ''John Chambers is a hero'', referring to his vote against the outsourcing.

Real Meals Coalition spokeswoman Anna Huffstuttler announced that a public meeting would be held in three weeks in Dunedin to present a petition to the health board.

Her family are bringing her two meals per day, as the food is ''inedible''.