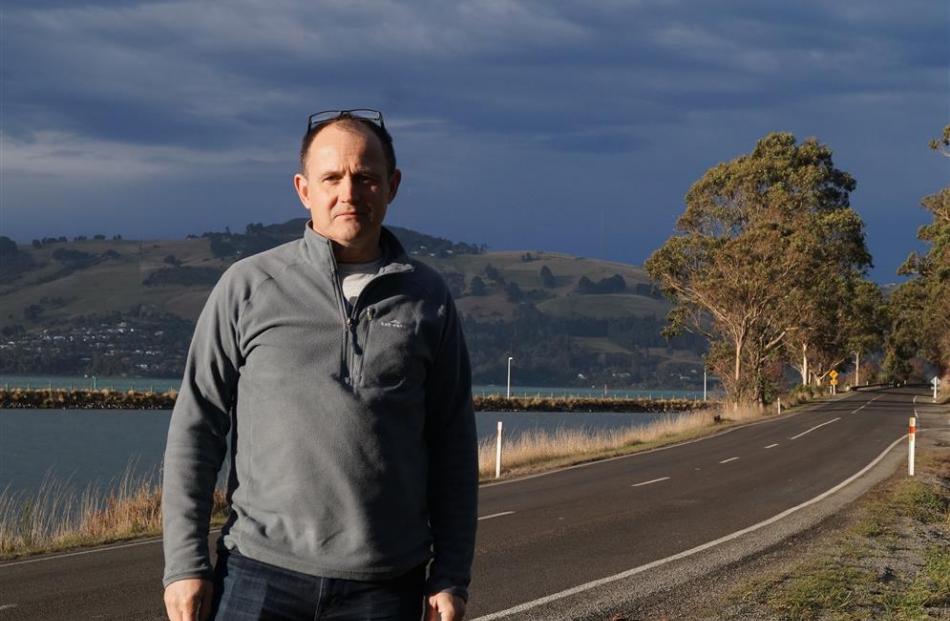 Steve Walker hopes cyclists are not endangered by proposed changes to State Highway 88 between Dunedin and Port Chalmers. Photo by Greta Yeoman.

Cyclists will be keeping a close eye on safety improvements to the road between Dunedin and Port Chalmers after concerns were raised by cycling advocates that the road will become less safe for two-wheeled commuters.

State Highway 88, between Dunedin and Port Chalmers, is one of 11 high-risk South Island roads that are part of a $21million roading upgrade project by the New Zealand Transport Agency (NZTA).

Chalmers Community Board chairman Steve Walker, who sat in on the NZTA's meetings, said he had heard the agency would be putting in thick rope barriers along the 80kmh stretches of the highway.

While it would make drivers feel safer on the road with barriers stopping them from "ending up in the drink'', there would be nowhere for the cyclists to go if there was an accident, Mr Walker said.

It could also be "intimidating'' for cyclists if they felt the barriers were enclosing them.

"All road users' safety is of paramount importance.''

Sawyers Bay resident and cyclist Samuel Mann was also concerned about the barrier idea as it could potentially push the cyclists further on to the road.

He said cycling on the road with cars and logging trucks was already "terrifying''.

However, NZTA Southern business unit manager Ian Duncan said the installation of the barriers was "not expected to impinge on the currently available sealed pavement areas'', even in the more narrow sections of road.

Mr Duncan said both projects would "improve the safety'' for all road and pathway users.

"The barriers will prevent drivers crashing into the harbour, which occurred on two occasions last summer, and they will also offer protection from traffic to cyclists and people on the pathway,'' Mr Duncan said.

Mr Walker said the solution to cyclists' concerns would be to simultaneously work on the shared pathway project between Port Chalmers and Dunedin, which has gone on hold after a budget blowout earlier this year.

Cycling advocacy group Spokes Dunedin secretary Jon Dean agreed with him, and said completing the pathway would provide the safest route for cyclists travelling to and from Port Chalmers.

However, Mr Duncan said it would not be possible for the two projects to be worked on at the same time because of crew commitments and other issues.

The NZTA was unable to confirm when the work on the barrier installation would begin.