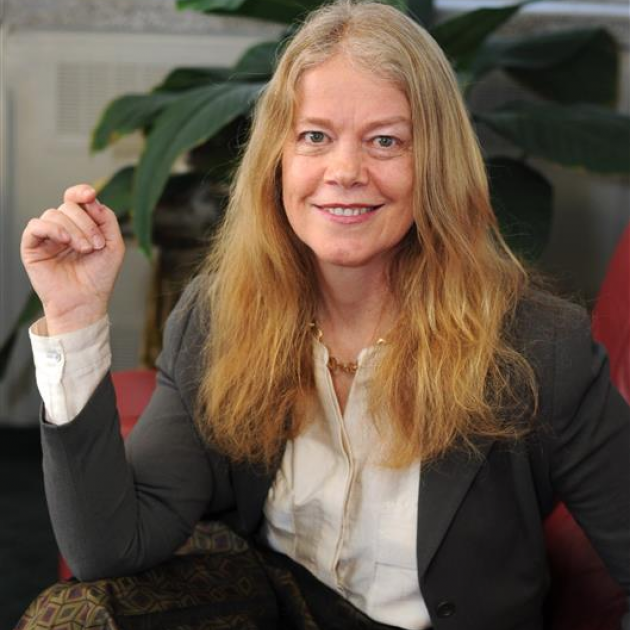 Dunedin city councillor Hilary Calvert has announced she will not stand in the October elections. Photo by Christine O'Connor.

Dunedin city councillor Hilary Calvert announced yesterday she will not stand in this year's elections, but not before taking parting shots at some of her colleagues and Mayor Dave Cull.

Cr Calvert said she would not be standing either as a councillor or for the mayoralty, after one term at the council table.

She said she was unable to make a difference in a council dominated by councillors "whose focus is on carrying out activities for the benefit of the planet and on advising central government on how they may go about their business, not ours.

"This preoccupation has been at the expense of the proper and transparent governance of the city.''

She took aim at what she said were "covert meetings'' of councillors and staff before councillors went through "the role play of consulting ratepayers, only to ignore their views''.

"The council meetings held in public are therefore largely irrelevant.''

Cr Calvert also took aim at Mr Cull, saying it was "quite clearly not a good position to be disagreeing with him''.

Mr Cull yesterday responded it was not for him to comment on other potential candidates' decisions.

Every candidate needed to decide whether they had enough support for themselves and their views to continue, "and Cr Calvert's made that call''.

Cr Calvert (61) said the big issues for ratepayers - cycleways, fraud, what council-owned companies were doing, and maintenance of mud-tanks - were "never on the agenda of council meetings until a rearguard action happens after the problems are identified by others''.

"Unfortunately, I cannot foresee this changing. For me enduring council as some kind of disingenuous spectator sport is unsustainable.''

On her allegations of covert meetings, Cr Calvert said the sharing of thoughts and understanding of issues often happened at workshops and briefings that were not public.

For example, the second generation district plan process went to workshops, and if councillors had concerns they would tell staff. If something was going "where some councillors would not like it to go'' that discussion was not public.

Councillors with other views did not have the opportunity to discuss them in public.

Once a public council meeting took place, such policies were "fairly much in completed form'' or could not be challenged.

"By that stage it's almost a done deal.''

Asked if having green-leaning councillors was the will of voters, Cr Calvert said green concerns were the focus at the expense of local concerns "which we are not short of''.

The issue of parking space losses because of cycleways was one example, where residents took a petition to the council "but we didn't take a blind bit of notice of them''.

"I don't think when people voted the current council in that's what they were anticipating.

On Mr Cull, she said "you could find yourself discouraged from continuing, either quite actively or passively, to ask questions''.

She did not intend to return to national politics.

"I am sad, because I was hoping that I could make a difference. It is really important that people get involved in the process.''